Fashion circles are abuzz in anticipation of New York-based designer Katie Gallagher's dramatically sculptural garments and endearing yet contemplative motifs (think inflated cats, Neuromancer, Veronica's Veil) to be presented at her first full ready-to-wear collection on September 12. The dainty, dreamy RISD alum further refined her skills at apprenticeships with threeASFOUR and Anna Sui -– garnering industry whispers of her unrivaled technical prowess and diligent emphasis on the wearer's personality. It was a pleasure to chit-chat with the fellow history buff and rural Pennsylvania native on her pixie-like upbringing, distinctive design journey, and upcoming Spring/Summer 2010 presentation.

Can you tell us a bit about your environs while growing up?
I grew up in a farm town in Pennsylvania. I was surrounded by forests and I played with wild animals all the time; in fact, my mom thought I was a saint because I would perpetually approach and touch random animals and they never ran away from me! I was a forest creature, really –- I never wore shoes, and I hated wearing clothes (but always wore my cat on my head)! Growing up consisted of picking mushrooms and berries, making little potions... and avoiding clothes. I'm not really sure how I ended up being a fashion designer in New York, but here I am!

What first sparked your interest in becoming a fashion designer?
When I was younger, I was always vintage shopping and altering my clothes on a little Singer machine. When I attended art school at RISD (Rhode Island School of Design) I originally had the intention of painting, drawing, and doing whatever I wanted! I was so interested in drawing and dividing up the human body into shapes –- by dramatizing and adding character to it –- that I majored in fashion to learn how to sew properly and make patterns to do this in a more effective, refined, and pure way. I haven't really stopped making clothes since... and now I'm launching my first collection!

How would you describe your design aesthetic?
I like things to be relatively pure: fashion is as much about what's in style as it is about eloquently communicating the personality of the wearer. I'm not particularly frilly and I like to avoid things that are too confectionary or embellished... I definitely appreciate a certain hardness and drama. But that said, I want to avoid the ambiguously masculine road that is so often associated with that aesthetic. Avoiding lace and trim doesn't mean you have to start cutting up and refitting menswear! A big part of what I do with my designs is technically motivated. I'm a firm believer in non-traditional pattern-making and I avoid superfluous seaming and construction in my clothes; seams should follow a woman's body and thereby accent it... not merely use the amount of fabric that's the simplest and most inexpensive to cut in a mass market factory.

Why are you so enchanted with cats?
They're furry AND low-maintenance! I only really love novelty-sized inflated cats like my Sveater though [photographed above].

Who or what was your chief design inspiration last season? ...and for this upcoming season?
Both in my last collection, Shroud, and in the upcoming collection Veil, I have followed a pretty similar focus: pattern-making, wrapping the body, and a ghostly, ethereal feel. Both titles Veil and Shroud come from historically significant artifacts -- namely The Veil of Veronica and The Shroud of Turin -- wherein a piece of cloth had taken on much more meaning than the sum of its parts.

However compared to the all-white Shroud, Veil embodies a much harder approach; it's mostly composed of blacks and I was affected by very dramatic butoh dancers -– these really curated, focused body positions and movements. I tried to contrast that image with some of the aesthetics and moods of cyberpunk literature: novels like William Gibson's Neuromancer and Neal Stephenson's Snow Crash. This sort of high-tech, low-life world.

How has working at threeASFOUR and Anna Sui affected your personal work?
They are very different places: threeASFOUR focuses primarily on pattern-making and construction (just like I do) so it was a great place for me to learn. Anna Sui had a very focused aesthetic and incorporates everything she loves into her clothes; they're very much true to herself... and I admire and respect that.

How will you be presenting your new collection?
I'm having a presentation of 22 looks and some 70+ separates at the Tribeca Grand during New York Fashion Week. I am trying to blow out the presentation as much as humanly possible given my limited resources; I have funded the entire collection out of my pocket (which is a very small pocket!) and I've handmade all of the samples, cut all of the patterns, and glued and hammered the leather all by myself. I've literally set up a small production house in my studio! It's amazing how many people have gotten behind it and helped me with actually presenting the collection... I even have a German industrial group making a custom soundtrack for the show. It's pretty ridiculous. I hope the show will be too! 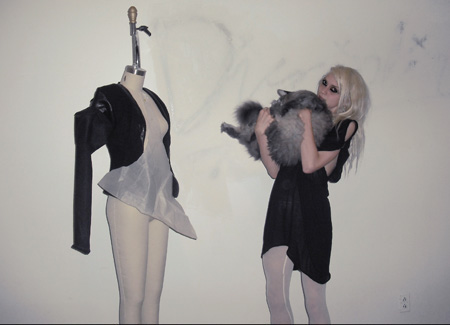 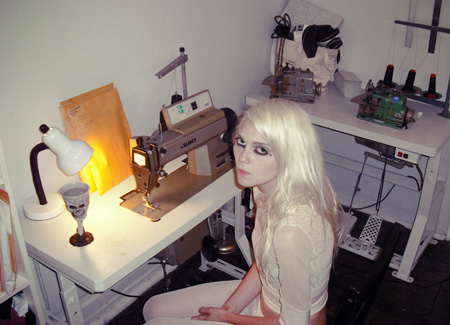 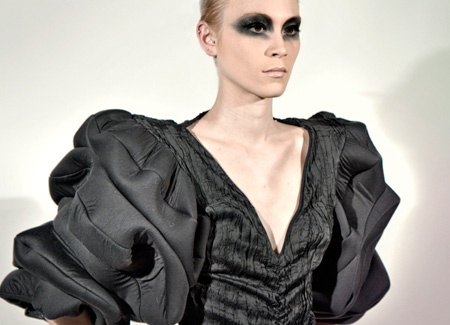 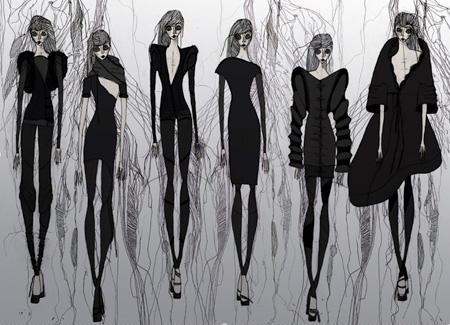 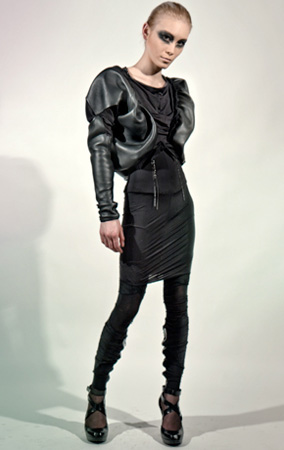 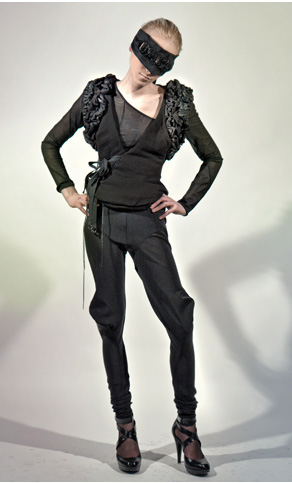