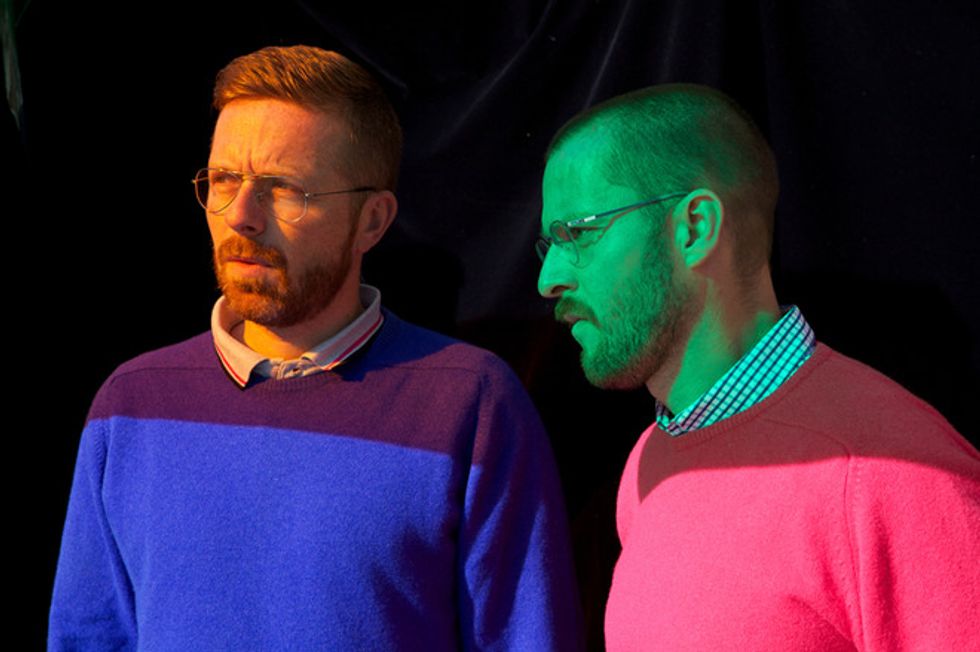 Sander Plug and Lernert Engelberts, better known as Lernert & Sander, have been quiet arbiters of cool for over a decade. Fashion companies and bands have long been using the duo to inject chic minimalism, humor and the occasional sexy moment into their campaigns. We've been following them since they helped found BUTT magazine but they've really come into their own in the past year: their video "Natural Beauty" -- wherein the duo re-applies a model's makeup for 9 hours straight without washing her face -- went viral, and they've recently landed campaigns with Viktor & Rolf, Kenzo and Brioni. They also recently launched their own scent, "Everything," featuring every perfume released in 2012 . We caught up with Lernert and Sander to discuss their work, the founding of BUTT, hiding from Grindr hookups and their mutual crush on Mark Ruffalo.

How did you two meet?
Sander Plug: We met at the launch of a magazine of a friend of ours, Jop van Bennekom. I saw Lernert standing, and we were wearing the same shoes, which were very strange shoes.

Lernert Engleberts: Nike shoes! I'm maybe making this up, but I think we were given them. At the end of the '90s there was this guerrilla marketing technique where you'd give shoes or sweaters to "early adapters." You'd just hand them to poets, DJs, or designers and hope that they would infiltrate the flock. We talked about the shoes and became quite good friends. And they were hideous shoes.

SP: Yes, they were quite hideous, but we liked that they were hideous and no one else was wearing them.

SP: I'm not sure about my shoes -- they're quite lesbian.

LE: And they look quite small.

What's your process? How do you work with each other?
LE: Because we want to do everything together, and we do do everything together, it's basically sitting around all day at the table, thinking and talking, having fights about nothing. We work to just get to the point where we agree on something and feel it's okay. Then the rest of the world can execute it.

SP: I would Rembrandt and you would be Picasso.

Do you choose between projects or take whatever comes?
SP: We take everything and try to make it into our own.

LE: We'd have a lot more work if we didn't take everything and make it our own! Of our 50 or so pitches, we loose 48 because we tend to change the story or idea.

SP: Sometimes you just need to be very surface and do a job which is not very interesting. That kills us because we don't get any energy from it. The only thing that's nice is getting the money.

LE: We'd rather be poor, basically. It's good to stick to your ideas and lose 48 out of 50 pitches, right?

Who's influenced you the most?
LE: Well, I see one influence on the wall: Andy Warhol. I don't know why it's there.

LE: Mykita. They made my glasses. Rayban? They made Sander's. Basically [whoever makes] what you wear.

LE: We don't like working for what we don't believe in. We actually got a question in from CERN [The European Organization for Nuclear Research], a nuclear propaganda thing. They were like, "If you were going to make propaganda for nuclear energy..." And we were like, "No. We Can't."

What are you guys working on next?
SP: Film is interesting for us but we'd like to build it out a bit. A dream project would be to design something that's salable outside of a  film. It would be interesting to find out if we can widen the scope of our work, and also sell something. Make a film for Nike but also design a shoe.

LE: It's frustrating to only make only front-ends, and never back-ends.

SP: Sometimes we get bored of not having physical things in our hands.

LE: It's better to make an effort for inspiration -- go to a museum or read a book. But pictures in an endless stream of blogs -- I don't believe people can make well-thought, consistent and good work from it. I don't have Internet at home anymore. We don't even know how much the Internet knows! It's an ugly beast.

SP: I hope that the internet will be functional, but will fade away.


You tend to use objects and instead of people in your work. Why?
SP: It's nice to not work with people because you don't have to worry about a person's energy.

LE: And you don't want to spoon-feed an idea to the viewer. You want them to feel smart. Take the music video we made for [the song] "Elektrotechnique." We could've used people to let them know it's absolutely about sex. But when you make machines, people have to use their own dirty minds.


How does sex affect your work?
SP: We're homosexuals and it's part of our life. It influences us.

LE: I think it's also because you can use the shame culture around sex easily. Things automatically become edgy. The way we execute it is always tasteful and never so shocking that you don't want to see it, but people become a little uncomfortable. We like that.

You were played a role in founding BUTT magazine. Tell us about that.
EL: BUTT was created by a group of friends and we were part of the first meetings about what it should be. [Founder Gert Jonkers and Jop van Bennekom] had the great idea to make a magazine about the new generation of gay men who didn't feel comfortable embracing a commercialized version of "gay." It was hugely influenced not by visual, but textual gay magazines like Straight to Hell, which were very subversive and about real people. It came as a shock because any gay magazine [of the time] showed these ripped, Photoshopped, unreal people.

I actually was in the photo shoot for the first issue. It was a photo shoot where Jop had the idea to reclaim the David Beckham shoot that was by Arena Homme + that was basically a gay photo shoot. You saw Beckham making very suggestively "gay" poses. We made this photo shoot where I mimicked Beckham's exact poses, but you could see everything. The shoot was called "We Want It Beck!" Basically the point was to bring gay culture back to gays. Straight, highly commercial magazines were learning from us and making money off us. It was really a proposition of, "Stop exploiting us homos as a lifestyle you can bank on. Stop banking on us faggots."

SP: It was fun time. It was made with friends, a small community of people that grew. But we all grew older, eventually leaning toward Fantastic Man, something that was a better fit. BUTT magazine served its purpose and is now an online community which I think is very good.


What magazines did you love as kids?
LE: We both liked this magazine that was like a Nordstrom or JC Penney catalog.

SP: We always went straight to the guys who were only in their underwear. For us, it was our way of getting to see male nudity.

LE: And then your mother would find the catalog and order the underwear because she would think her son really liked this underwear.


Are you domestic or do you like to party hard?
SP: Ugh, parties.

LE: Maybe I should go to one tonight and see if I can be changed.

Do you think apps like Grindr are going to become the main way gays meet?
EL: I think the best way to meet is to go to bars.

SP: Yet you were just saying you are very domestic.

EL: I can't recall ever having a really good date or a really hot date when I invited someone home on Grindr. Home for me is private, so I instantly shut down when someone's at the door. I'm not a slut with my pants open or anything. When I let someone into my house, it means something.

SP: I don't really use this stuff. I used it once -- I think when I was on holiday -- and I had sex. I don't like that way of interacting with people.

Actually once we were having tea [in Lernert's] apartment and the doorbell was ringing. Then Lernert says, "Ah! Now I remember, I made a date! Get on your knees, because that's some guy I hooked up with on Grindr." So I needed to sit for ten minutes on my knees.

EL: Not to suck me off, but so no one could see us!

SP: So this guy couldn't see us from the outside.


"Everything." by Lernert & Sander.

If you could have sex with a celebrity or public figure, who would it be?
LE: Justin Bieber, no? [Laughs.]

LE: Yes, I said that. We'll see who he likes better when we run into him on the streets!


If you could have dinner with any celebrity or public figure, who would it be?
LE: Same. Mark Ruffalo.

LE: Freud would just be doing cocaine in the bathroom. He was such coke addict you wouldn't even see him. I don't want to go to dinner with Freud.