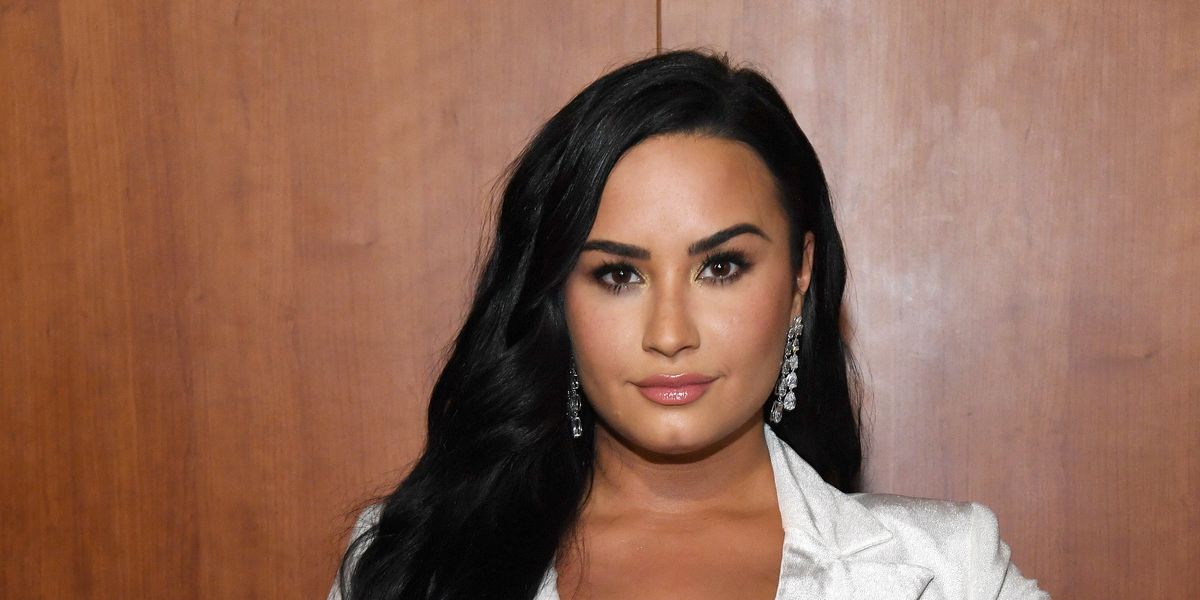 We are all currently surviving through two global historic events: a pandemic, and racial justice movement. No matter how many notable figures, including our President, attempt to deny the legitimacy of either. Demi Lovato is with us, though, and today penned a personal letter for Vogue's Opinion section in which she shares her own quarantine activism story, journey to her current mental and emotional state, and what she witnessed as COVID-19 rapidly spread this year and Black lives were continually taken at the hands of police and racist violence nationwide.

Lovato begins by acknowledging her pre-pandemic career successes and accomplishments, including her powerful SuperBowl and Grammy performances, the "Anyone" release, and a single then on the way with Sam Smith, which was ultimately released in April, months later. "I felt secure in my career and had been prepared mentally to crush it," Lovato writes in the introduction, "When everything came to a halt, I — like I'm sure many others reading this — felt adrift."

Lovato has always been bravely open about her struggles with anxiety, depression, eating disorders, addiction, and mental health in general, and wrote about her mid-pandemic experience enduring countless setbacks, many which she writes were collectively felt worldwide: "Depression and mental illness are part of my history, and because of all the uncertainty surrounding the pandemic, my anxiety skyrocketed," she writes. "I was suddenly confronted with all these questions: 'When are we going to go back to work?' 'Are more people going to have to die?' 'How bad is this going to get?' Everything was so suddenly out of my control and not just for me individually, but for us as a global community. It was — and remains — a truly unprecedented time in history."

The first section of Lovato's letter is titled, "Forced to stop and think," in which she details the memorable beginnings of the early 2020 COVID-19 outbreak in the US. As normal life began to dwindle, thousands adapted to working and staying home in order to prevent infection and to protect others. This time in quarantine was vital for Lovato, who writes that she and her fiance engaged in many healthy activities such as journaling, painting, photography, appreciating nature, and establishing a nighttime routine to help ease her anxiety.

Lovato also addresses the capitalistic way in which so many of us become exhausted — through comparing ourselves and neglecting our own needs in order to "get ahead." She then explains how more existential questions emerged for her over time spent alone. "All of a sudden, a pandemic hits and everyone is forced to stop and think," she writes. "I started to ask myself questions: 'What's important to me?' 'What's going to get me through this?' 'How can I remain positive?'

She then writes about societal change that has been brought about from 2020, and not just mask-wearing and everyday-life differences. Lovato writes of the potential for there to be less mental-health shaming after so many are becoming more attuned to their own self-care (or lack of) while trapped inside: "One positive thing about the pandemic is that it has shone a spotlight on mental health in a way like never before. For so many years, mental illness was seen as shameful. I certainly felt ashamed; I was made to feel ashamed. This comes from ignorance. People just didn't understand what it was, people were scared of words such as anxiety and depression. [...] Education and the language we use around mental wellness is crucial."

After Memorial Day, there was a distinct shift in everyone's Instagram feeds. Lovato touches upon this as well. In the wake of George Floyd's murder, and even before then, after the news of Ahmaud Arbery's killing broke, many celebrites and average users began utilizing their platforms to share resources for followers of color, including GoFundMe links, bail information for arrested protestors, where to donate, etc.

Lovato writes that her past Instagram feed used to feature "mainly all glamour shots and pictures of me looking cute and fancy" but now displays "information about racial injustice and what we can do to help." The singer, actress and activist then details how Black culture inspired her music, specifically Aretha Franklin and Whitney Houston's vocals, and how she never would have achieved such notable success without their influence.

"You have to step in if you see something happening that's not right," she writes, "a racist act, a racist comment, a racist joke. And it's not just with Black Lives Matter. It's also with the Me Too movement. Finally, the world is waking up and it's beautiful to witness."

As she closes the section, Lovato addresses the need to "create environments where women, people of color and trans people feel safe," and "equal to their cis, white, male counterparts," before calling on the music and entertainment industries to prevent sexual harrassment and stop underpaying employees.

The final section of Lovato's letter is titled, "A year of growth," in which she explains the ways in which she has grown this year, including falling in love in a "whirlwind romance" and overcoming resentment for her father and "daddy issues" through writing letters.

She then directs the reader towards the future, one in which she wants to put more energy towards her music and advocacy, as well as striving to be a "better person" while inspiring others: "Above all, I want to leave the world a better place than when I got here."