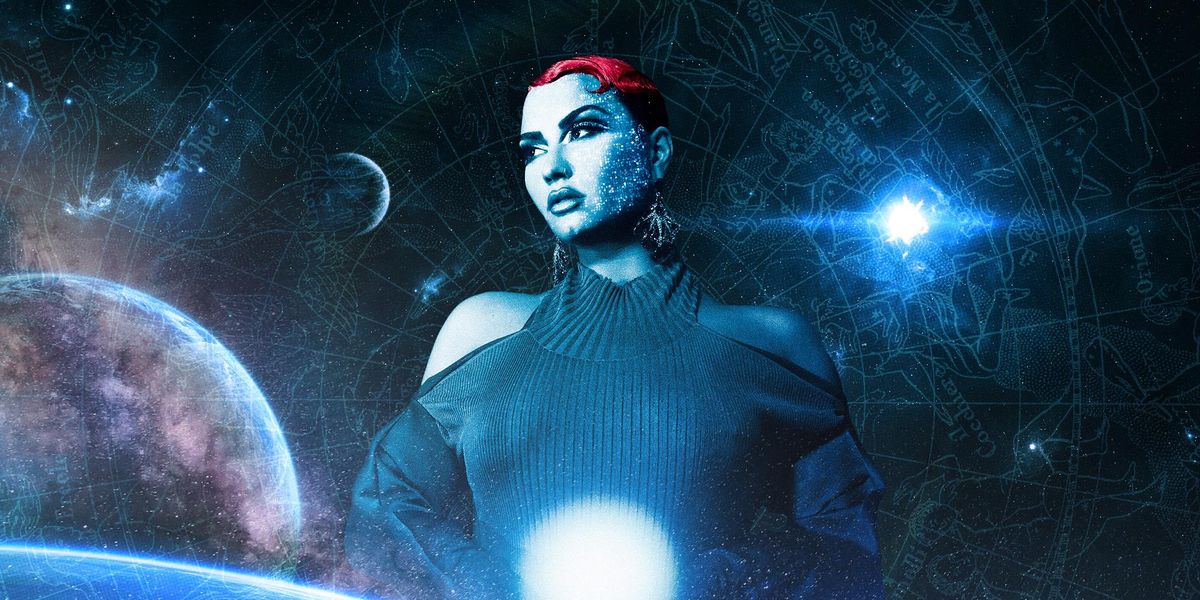 Demi Lovato: we know her as a powerful woman with a powerful voice. She has achieved a lot throughout her life, but she's also had some challenges thrown her way. Today, we're going to look at the astrology of Demi Lovato to determine what has made her so resilient and successful.

Demi Lovato has Jupiter and Venus sitting in her second house in the sign of Virgo. Jupiter is the planet of good luck, expansion, abundance and success. Venus is the planet that represents beauty, music and money. The second house in astrology can represent our speech, our voice, our singing voice, our finances and our savings. This planetary aspect indicates Demi had a lot of potential to make an abundance of money from using her beautiful voice, and to make music in general. The influence of Virgo being in her second house is reflective of Demi's detail-oriented way of making music. This is because Virgo energy represents paying attention to detail.

Related | The Astrology of Daft Punk's Break Up

Lovato embarked on her journey of stardom when she first started taking acting and dancing classes at just seven years old. This decision led her to acquiring her first hit role on Barney and Friends three years later, as "Angela." At the time, Demi's North Node was transiting her tenth house in a harmonious trine aspect with her natal Saturn. The North Node in astrology can represent our life purpose, our life destiny and the things we may find ourselves intensely focusing on in this lifetime. Trine aspects are very positive and harmonious to have in a chart. They indicate that the energies between the two planets innately work well with one another, and they can often bring us something positive and fulfilling. The tenth house represents fame, recognition, our career and our public career image. Saturn is a planet that can represent longevity, and long-lasting events. This aspect indicated that Demi was about to embark on a life-long career in the entertainment industry, and building her way up to fame. Around this time Demi also acquired different smaller roles on shows like Prison Break (in 2006), and Just Jordan (in 2007).

Then came her big break, acquiring and playing the lead role of "Mitchie" in Disney's Camp Rock. This was Lovato's first major lead role in television, leading her up to massive stardom. Demi Lovato acquired this role when Pluto was transiting her fifth house, and in a conjunction aspect with her Natal North Node in the fifth house. Pluto is a planet that can represent rebirth, transformation and power. The fifth house in astrology can represent acting and the entertainment industry. Conjunction aspects refer to the energies of two planets working together in unison, creating a more powerful force together. This aspect helped to give Demi Lovato a powerful acting role in the entertainment industry that would later on transform her life forever.

Also in 2007, Demi Lovato had her North Node transiting her seventh house. The seventh house represents many things such as the relationship that we have with the public, and being in the public eye. Having this North Node transit indicated that it was a part of Demi's life purpose to cultivate a powerful and strong relationship with her fans and supporters. Furthermore, this transit indicated that it was a part of her destiny to be in the public eye at this point in her life.

Lovato would then get her own television show on Disney, Sonny with a Chance, first airing in February of 2009. At that time, Demi had Jupiter transiting her sixth house in the sign of Aquarius. Jupiter is the planet of good luck, expansion and abundance. The sixth house represents various things such as our work ethic, our work and our workplace environment. Aquarius represents many things such as cameras and televisions. This transit was reflective of the show's popularity, and ability to gain an abundance of fans and support.

However, Demi Lovato recently disclosed that filming Sonny with a Chance was extremely difficult, as she was being overworked. Tiffany Thorton, a co-star on the show, revealed that Lovato was sleep deprived while working on set, often sleeping in-between scenes after staying up throughout the night writing songs, and having meetings during her lunch breaks. This is reflective of Mars and Jupiter transiting Lovato's sixth house at the time. Mars is a planet that represents our action, our determination and our motivation. When Mars and Jupiter transit the sixth house, it increases the likelihood of someone becoming a workaholic, as Jupiter's energy expands the themes of the house it's transiting in, and Mars is a planet that makes us determined and motivated to keep going — even when we feel tired and fatigued.

In her new YouTube documentary Dancing With the Devil, Lovato revealed that she survived three strokes and a heart attack after an overdose in 2018. Lovato has her 12th house in the sign of Cancer, and its planetary ruler, the moon, in a harmonious trine aspect with Jupiter. The 12th house in astrology can represent traumatic events, otherworldly energy and spiritual beings. Planetary rulers refer to the ruling planets of a house in a birth chart. The moon in this context represents Demi Lovato's challenging emotions. Her 12th house being in the sign of Cancer, and its ruling planet, the moon, being in a harmonious trine with Jupiter, helped her to get out of dangerous and potentially life-threatening situations. It eventually brought her to a place of emotional peace. Jupiter's influence and energy to the 12th house is referred to as the "Guardian Angel" placement.

Lovato has her Mercury at nine degrees. Mercury is the planet of our mind and our thoughts. The ninth degree is ruled by Sagittarius. This placement is reflective of Lovato's strength and optimism, which has helped her to get through her darkest days. This is because Sagittarius energy represents optimism, faith and hope. Furthermore, her Mercury is also in the sign of Leo, which has given her the ability to become a powerful influence and inspiration to those who struggle with addiction. She's helped to destigmatize the challenge of speaking up about addiction issues using her massive platform as an entertainer.

Demi has recently revealed that she is moderately sober, and has embarked on a journey of redemption. This is reflective of Chiron currently being in her 12th house. Chiron is an asteroid that can help us to heal our traumatic wounds over time through hard work, faith and determination.

Demi is a person who has an abundance of strength, resilience and power, and we're so proud of how far she's come.