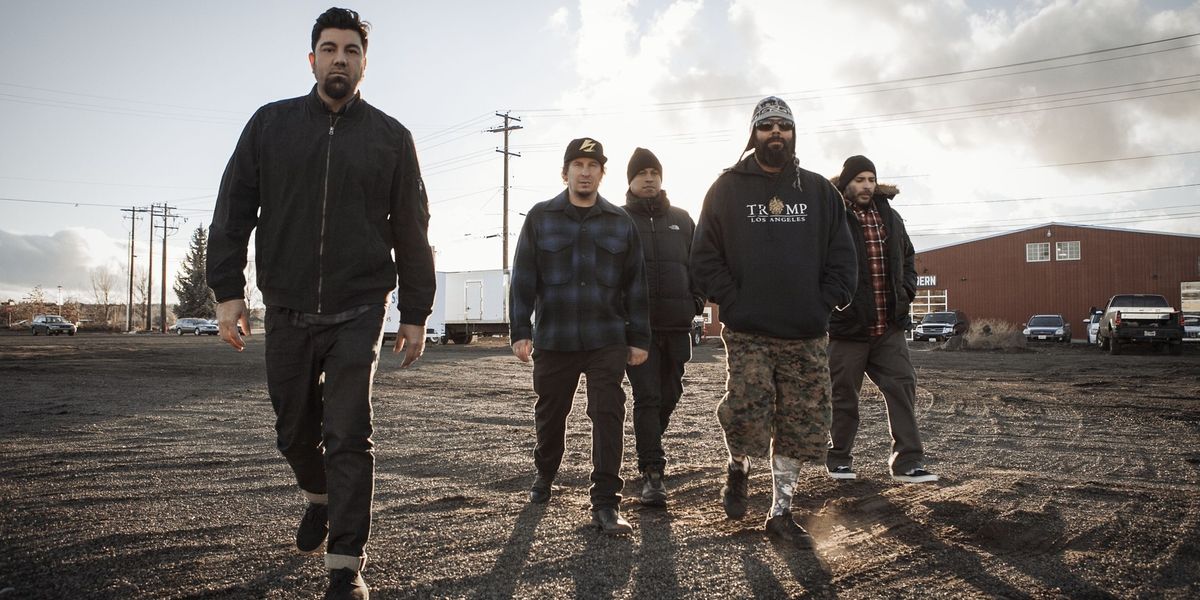 Last month, Chino Moreno surprised a select number of Deftones fans by performing in an Icelandic volcano at Secret Solstice Festival. It's a pretty cool thing for the alt-metal star, who has been frontman and guitarist for the alt-metal band Deftones since 1988. Their latest album, Gore, was released back in April, and they will play tonight in Brooklyn at the Coney Island Amphitheater.

We caught up with Moreno to talk about performing in an Icelandic volcano, how they've mellowed (and not), and what the future of Deftones looks like.

You played Secret Solstice Festival in a volcano last month, which was pretty unreal. Can you tell me about what that experience was like for you?

It was kinda trippy. When they first asked me to do it, I was like that's weird, but it could be a cool thing. It ended up being a little sketchy. The whole performance part was fine, but it was more the getting in and out of the volcano that was really crazy. We were flown in there by helicopter about 150 yards from the edge of the volcano. The helicopter didn't come back, so while we were inside the volcano, the Coast Guard was going to come and get us because we had another show at night. Two hours later we were still sitting there because of the winds.

You guys have been playing live shows for a long time. How have they evolved over the years?

That's a big question. I think earlier on in the mid-'90s to the 2000s, we were 20 years younger so our shows were pretty intense. Maybe the dynamics weren't as broad as they are today, but I feel like they're dynamic these days when it comes to energy and old school aggression. I think that's balanced out by some of the more soothing parts of the set. We try to make a good effort to have these dualities, and it keeps the show more interesting. Being a lot younger in age, that aggression and angst was much more prominent than it is now. We've mellowed out a little bit, and I think for good reason. I think it gives a little more depth to our songs and our shows.

Are there any alt-metal bands you've been admiring recently?

There's a band coming on tour with us at the end of July called Spotlights. They just put out a record less than a month ago. It's really good. I hear this early '90s [sound], heavy guitars but with dreamier vocals. They have a really good record. It's a short record, but it's perfect listening. The heaviness to it peps you up, but it's also soothing as well.

If you were to look back on your career, what stands out the most to you?

I can easily say the late '90s, when we released our second record [Around The Fur]. That album is still one of my favorite records we've ever made. We were young enough that we were grateful to make a second album. I think we really split our sound out from the first record to the second record. I think we were just having a carefree time. We were a little wild, but that whole time it felt like a prominent time in our career. We had a lot of fun and the tour around the record itself brought us around the world, where we generated fans. It was a prominent time in our careers. The Around The Fur era of 1997-1998 were my favorite years.


What did you experiment with the most on your latest record? What are you most proud of?

Well, in making a record, we don't have an idea of what we're trying to create or replicate. There really isn't much talking in general at all. It's a lot of speaking through instruments. Of course, we have bullshit talk a lot. As far as planning what we're trying to do musically, we stray from that. We play noise and everyone reacts to that noise. It's an organic process where we don't really know what's going to happen. That uncertainty makes the creative process a little more interesting. Because of that, we made something that's a snapshot of this time in our lives. All in all, I'm pretty proud to think we're still able to generate new fans and not completely alienate our old fans. I understand that the record isn't the easiest to hear the first time around. Stephen [Carpenter] has been very vocal about that. We chose eleven songs we felt were very strong as a collective unit. We're pretty proud of this album.

What does a future Deftones record look like in your opinion?

I don't know. I've always had this idea to strip things back instead of expanding our sound: Meaning no electronics, keyboards or samples. I would put down my guitar and just have Stephen [Carpenter] play guitar, Sergio [Vega] play bass, Abe [Cunningham] play his drums and me sing. It would be taking the rawest, most general idea and go with it. For a few records now, I've been wanting to experiment with that.