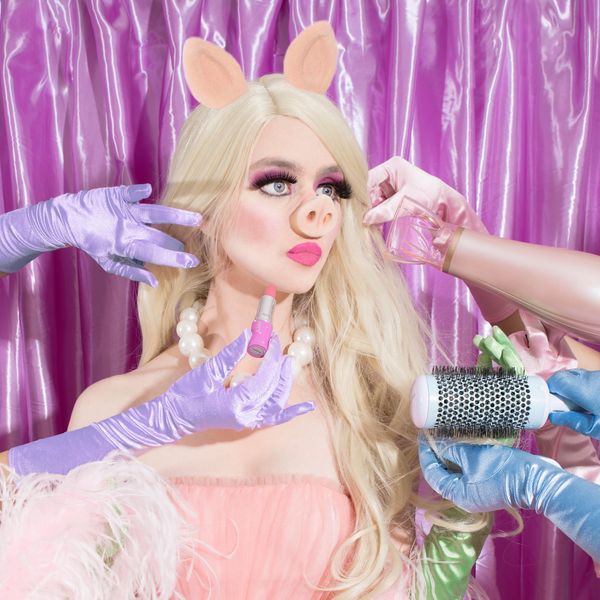 There are hundreds of cartoons based in alternate realities where animals think and feel like humans do, from Scooby Doo to Arthur. How would these humanoid animals look and interact outside their colorful sitcom universes, in our mundane modern world?

Danin Jacquay aka @deathcats, a photographer armed with whimsical, campy vision and disturbingly realistic prosthetic by cosplay company NorthFur, took on this question in her new portrait series, AnimalZ. Most sentient animals are found in cartoons for children, but Jacquay's idiosyncratic creatures are more in line with the flawed, egoic, existentially struggling beasts of Wilfred or BoJack Horseman, where stallions are self-loathing alcoholics and golden retrievers have mommy issues.

Meet her cast of tragic characters: a celebrity pig who "has her ex for dinner," a mouse and a rooster who met at an office party, a perverted office walrus who fantasizes about his boss, a world champion equine who fawns over her trophies, a self-obsessed duck, an overwhelmed teenage lizard mom, and a serial killer dalmatian dad.

The photographer and director explores how animals' faces, bodies and zoological proclivities would manifest in the modern world — the results are viscerally funny and disturbing, but uncannily enchanting. She plays off of a handful of cinematic stereotypes: diva pig with a frog ex-boyfriend, a suburban dog-dad, but generally, her creations are bizarre and idiosyncratic. Body horror and erotica are somewhat inherent in the anthropomorphic play — animal-humans are far more often portrayed as monsters then as relatable, complex protagonists. But after the initial shock, each portrait leaves you wanting to know more about its subject's story.

"I was super inspired by seeing cartoons and wondering what I could do to make my work leave reality in the same way" explains Jacquay. "I've been shooting portraits of people for a long time now, and as you can imagine, the human face can be pretty limiting. I have a fascination with the theme of "monsters & madonnas," so I wanted to stretch the boundaries and create characters that were funny but uncanny."

Jacquay dreams of one day turning her creatures' stories into short films, but for now, she just hopes the shots will make viewers ask themselves, "What animal am I?"