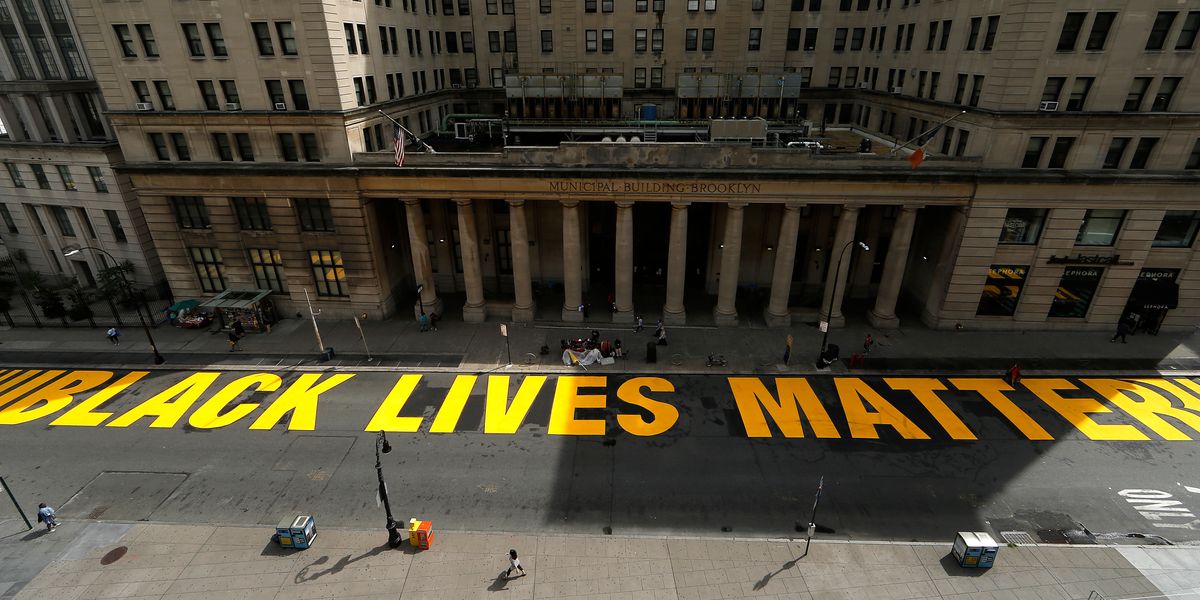 As a president who recently retweeted white supremacist videos, attempted to identify racial justice protesters and has long failed to condemn the KKK and other hate groups, it's pretty unsurprising that Donald Trump would advocate against the Black Lives Matter movement. In the wake of George Floyd's killing and long before, he has frequently incited violence against Americans and sent threatening messages to anyone who may disagree with him. Now, he and NYC mayor Bill de Blasio are caught in the midst of a tweetstorm, stemming from Trump dubbing Black Lives Matter as a "symbol of hate" on Twitter. Here is where it all began:

Related | Trump Is Posting Photos of Protesters on Twitter

In late June, de Blasio first announced that a Black Lives Matter mural would be painted right outside of Trump Tower's doorstep on NYC's iconic Fifth Avenue. This location was selected for a reason: "Painting 'Black Lives Matter' outside his home is a message to him that in fact Black lives do matter, that Black people built New York City and they've never been compensated for all they did," de Blasio said in a briefing at that time.

Naturally, Trump took to Twitter to unleash his frustration after de Blasio's announcement: "NYC is cutting Police
$'s by ONE BILLION DOLLARS, and yet the @NYCMayor is going to paint a big, expensive, yellow Black Lives Matter sign on Fifth Avenue, denigrating this luxury Avenue," Trump tweeted on Tuesday, appalled at the idea of defunding the police. "This will further antagonize New York's Finest."

What really appeared to have irked Trump was the idea of a Black Lives Matter symbol painted directly outside of one of his homes. Last month, the movement's name was painted in large yellow letters on 16th Street, in front of the White House. It was renamed Black Lives Matter Plaza by Washington DC mayor Muriel Bowser, much to Trump's dismay.

He then went on to praise the NYPD, adding that anything related to Black Lives Matter should be considered a "symbol of hate." This comes from someone who refuses to condemn Confederate statues, flags and other iconography related to systemic racism, colonization and slavery, never deeming them as symbols of "hate," but rather of "history."

De Blasio then fired back on Twitter, writing, "Black people BUILT 5th Ave and so much of this nation. Your 'luxury' came from THEIR labor, for which they have never been justly compensated."

In his daily briefing on July 2, de Blasio announced that the street painting has since been postponed to next week. Work was originally scheduled to begin Thursday, but will not due to "logistics." De Blasio also informed viewers that his office will announce when it is going to happen.