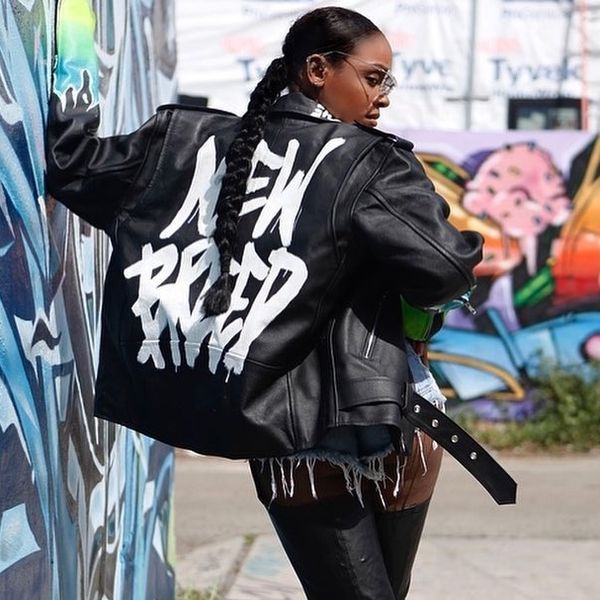 The collection features a range of eco-friendly and vegan leather motorcycle jackets, tees, and hats, with the words "New Breed" painted onto them. Some styles include multicolored flame designs and inscriptions of DAWN's most recent lyrics.

The collaboration is a successful meeting of like minds. Jeantrix is a Black-owned independent business who has created original streetwear designs worn by everyone from Janet Jackson to Nico Tortorella. And DAWN, a critically acclaimed independent artist following her breakthrough with Danity Kane in the late aughts, has since been a shining example of what it means to assume total creative control of her career.

She shows what's possible when Black women do it for themselves. As that kind of example, she is also a vocal supporter of other independent Black artists making their own way. As DAWN told PAPER in January, many of New Breed's themes and concepts are heavily centered on these principles.

"Throughout my career, I've learned set and stage design for shows and videos, how to do my own booking, how to balance my own budgets, which I was financing on my own," she said. "Every structure I learned from there applied how I sold the album, which I moodboarded and creative directed from top to bottom. When I'm done performing a set, I pack up my own merch table."

If you want to join a new breed of independent, creatively free bosses, you might want to snag yourself one of these pieces, which are now available for pre-order on Jeantrix.com, and will be on sale starting April 12. While you're getting into that spirit, revisit DAWN's New Breed album, below.