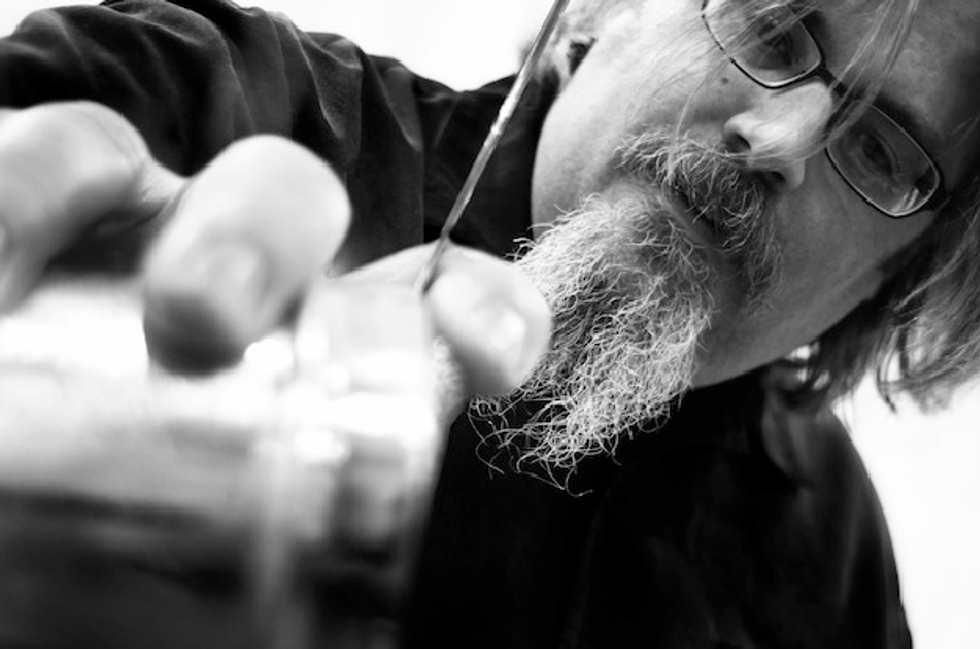 September saw the release of Brooklyn's latest spirit, Chief Gowanus New-Netherland Gin, made from an 1809 recipe discovered by spirits historian David Wondrich. The former English professor and author of Imbibe and Punch: The Delights (and Dangers) of the Flowing Bowl, chatted over the phone about the development process, his favorite bars, and why Irish whiskey is the new vodka.

How did you get involved in making Chief Gowanus?
I came across this recipe in The Practical Distiller, printed in 1809, and thought it was kind of cool, a confirmation of the theory I had that Colonial Americans were drinking Dutch-style gin made from American rye whiskey. I was talking to Allen Katz [co-founder of The New York Distilling Company] about it last year, who said they had plenty of rye whiskey and it sounded like fun. I figured out the quantities of the recipe, which was by no means clear, and we spent an afternoon at the Brooklyn Brewery learning about hops, one of the key ingredients. We fired up the still and gave it a try. The idea was to do a little living history.

How was the first batch?
Definitely Dutch-smelling, malty, grainy, with a little bit of juniper. It's a very butch genever.

Can you use it for a martini?
You should drink it in shots with beer backs, in simple cocktails or punches. It does not make a good martini.

The Dutch influence is still pretty strong in New York City, right?
Amsterdam in the early 1600s was built on tolerance. It didn't mean you loved your neighbors, you just tolerated them. The other side is the Dutch are extremely hard-working and don't like people who aren't hard workers. Since they were always in danger of war and flooding, everyone was expected to do their share. Those values were passed on to New Amsterdam. The Dutch were cosmopolitan and didn't care about making other people be like them, unlike puritanical New England and Southern values. To this day that's very much New York culture: hard-working, tolerant, a little bit grumpy.

In light of our Dutch-style tolerance, what do you make of the recent mayoral race?
As in Weiner? Okay, we're tolerant, but we're not stupid.

Who was Chief Gowanus?
The legendary chief of the local Indians down in Red Hook, the swampy lowlands. Gowanus is his name in Latin. I'm endlessly amused by the Gowanus Canal, my chance to label it on a bottle.

Why does it amuse you?
Have you seen the Gowanus Canal? It's green. There's something seriously wrong with it. For me it stands for the old, unreconstructed Brooklyn, this industrial ditch.

Swampy lowlands doesn't sound like a great place for his tribe to live.
Paddling around Governors Island, fishing and harvesting oysters, must have been pretty pleasant without the pollution.

What trends are you seeing in the bar world these days?
There's been a longstanding split in the fancy bartending movement that's getting further and further apart. You have your complicated, lab-inflected showpiece drinks at cocktail destinations like Booker and Dax, and on the other hand you have people reintegrating the neighborhood watering hole, saying 'this is just a bar,' and we make good cocktails.

What are your favorite bars?
I like Tooker Alley very much. I like the Dead Rabbit. I like Swift's a lot these days in the afternoon. And Clover Club always.

How are you seeing people's drinking habits change?
Irish whiskey is the new vodka. The most interesting thing about that is it was a deliberate strategy by the Jameson people to go after young vodka drinkers. It's working. Vodka sales are flat. Whiskey sales are through the roof. They're taking away a lot of business from mainstream mass-market beer. Jameson is a very pleasant whiskey, very accessible. It's for the more epicurean drinker. For stage two they've managed to turn Jameson drinkers onto pure malts and aged single malts from Ireland and not lose them to Scotch entirely.

Are you involved in making any other spirits?
I helped out with The Emerald Oregon Whiskey, an old, Irish-style, pot still whiskey with oats and rye along with malted and unmalted barley. It should be out any day. I made it with Tad Seestedt, an old friend who has the Ransom distillery. It's been three-and-a-half years in the barrel.

It's an interesting way to use your Ph.D.
A Ph.D is very flexible, as it turns out. It covers anything you want to do. Look at Dr. Phil.