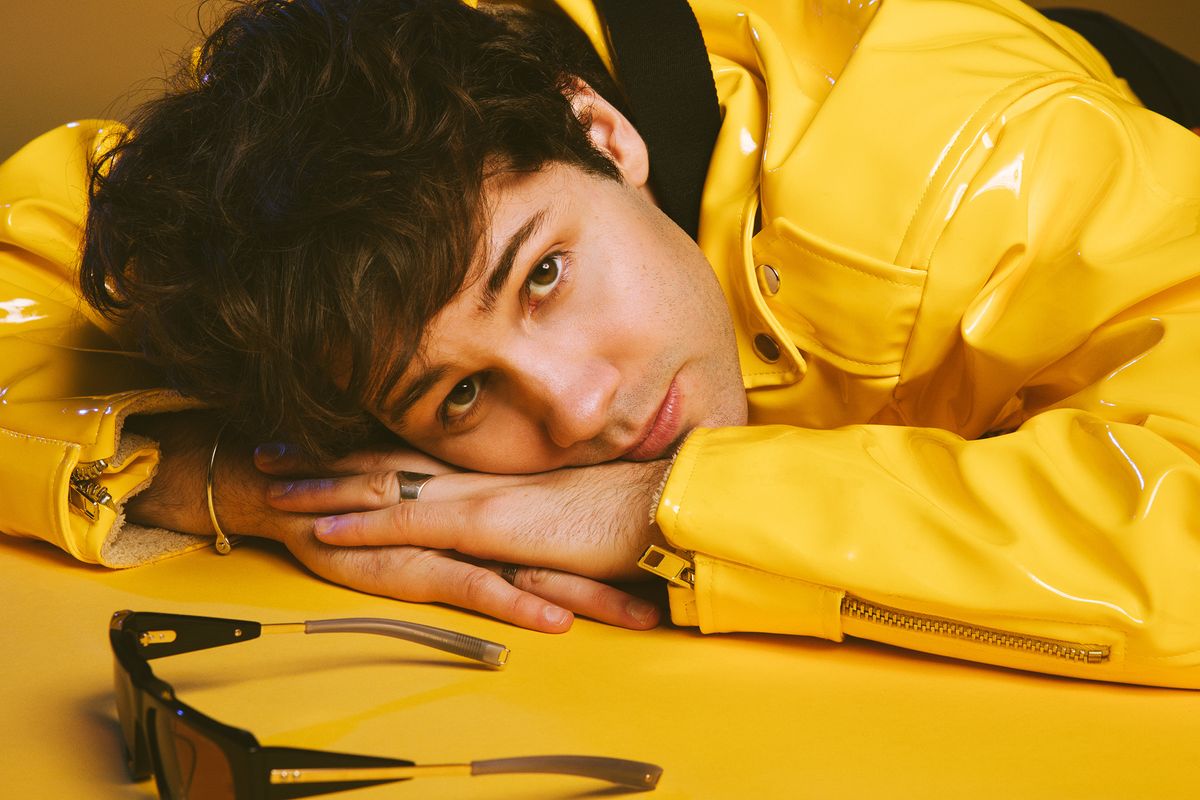 For one of the most famous YouTubers in the world, David Dobrik is surprisingly anxious in front of the camera. Or rather, it's this particular, fish out of water-like situation that has him on edge.

Calling it "a weird combination of everything I'm terrified of all in one," he's been told to get a haircut while being dressed in menswear couture pulled right off the runway. Not only that, but it's for a spate of high fashion photos that he won't be producing, tweaking or uploading himself. This is a far cry from his comfort zone of iPhone-filmed monologues and candid footage of his friends, all of which he edits by himself in the comfort of his Los Angeles home. And, needless to say, he's nervous as hell.

"Every time I'm in front of the camera, I look like I rolled out of bed, and I like that," David admits. He explains that having his looks be front-and-center, especially as someone who's always preferred to be behind the camera, is a gut-churning experience. "Every time I'm all dressed up, I don't like that."

Because at the end of the day, David just wants to have fun making videos with his friends in the Vlog Squad. And who can blame him? After all, there's a reason why millions upon millions of fans watch David's videos documenting their lives together. For all of the antics, goofy jokes and comical narration though, they've essentially created a small television show about their friend group for David's 16 million subscribers — a "surprising" and "confusing" phenomenon that the YouTuber says he continues to grapple with.

Granted, it's David's effusive affability and humor-filled candor that has made him a particularly beloved figure among Vlog Squad fans. Innately relatable and incredibly charming, he's the rare kind of online personality who's quick to poke fun at himself and will be the first to admit that he's still mystified by his fame, as exemplified by the nervous snort he lets out when I refer to him as a "teen dream." Or maybe that's just him being humble — something that seems all the more plausible with the constant gear-switching toward the role his friends play in his success.

"I think people watch because of how genuine our friendship is and how authentic everything we do and say is in our videos," David theorizes. "It's just us hanging out, making jokes and trying to make ourselves laugh." He catches himself before adding, "I know it sounds cheesy, but I think that's what people enjoy. They like looking at a friend group that they'd want to be a part of."

In a way though, this has been something David's been working toward his entire life. While he had always wanted to be a late night talk show host or affiliated with film in some capacity, as a "horrible actor" without traditional industry connections, the endeavor initially proved difficult. So instead, he began posting comedic, six-second clips on Vine, where he soon cultivated a small following. This ultimately spurred him to drop out of college and move to LA once he got his braces taken off at 18.

"All the mistakes we make are documented."

"It got to the point where I went to college for a semester, and I told them I can't do college anymore, it's too pointless. So they gave me an ultimatum: either go to school or move out, because, 'You're not setting a good example for your siblings.' So I was like, 'Hell yeah, I'll see you later,'" David says, marveling in retrospect at his past optimism. "Like, if my kid told me that, I'd be like, 'Hell no, you are staying here. There is no way.' I'd be terrified."

And things continued to prove tough once he moved into a Hollywood two-bedroom with three friends he had convinced to come with him. Recalling the time he and his roommate were rattled at having to spend $12 on peanut butter and milk, David says it was the first moment he experienced a small shadow of doubt — a revelation that also wasn't helped by the shuttering of Vine in late 2016.

But as other Viners panicked and hard-pivoted to YouTube in the immediate wake of the app's shutdown, David met Liza Koshy, who introduced him to the concept of vlogging. Enjoying the format's authenticity and low pressure feel, David decided to start uploading videos three times a week. Eventually, this led to the ability to "pay for rent by myself, then move out and then buy a car."

He jokes, "And now, here I am doing a PAPER magazine photo shoot. I'm a supermodel now."

So then, what else could one of the world's most famous vloggers possibly want after achieving what many would consider "the LA dream?" For David, the answer is easy: a sense of legitimacy and respect, especially from those "who didn't even think they could have respect for a YouTuber."

As he explains, the "biggest downside to doing what I do" is often watching "the interest completely flutter away from the eyes" of older industry players once he says he's a YouTuber. But as for why this is the case, David's current working theory centers on the platform's hodgepodge-like structure. With videos that range from the serious to the silly to everything in-between, he thinks the overwhelming variety of content can be irksome to those more familiar with traditional television's emphasis on thematically geared programming.

"They're like, 'I hate YouTube. YouTube is stupid,' because there's just so much content going on for different people and it's all mixed," he says. "So people don't get a very positive feel when they're on it. The problem with YouTube is if I want to watch something serious, I can click on it, but in two seconds, I'm also going to be greeted with some video about some guy surprising his kid with a baby cat. They get angry and frustrated."

Granted, a good chunk of David's content utilizes a format that mirrors this sort of patchwork method of presentation. Though he does have single-topic videos featuring bigger stunts and celebrity guests, his most popular vlogs tend to splice together disparate clips from throughout his day. A recent video (coincidentally titled) "SURPRISING MY ASSISTANT WITH A PUPPY!!," features a dog doing tricks, David getting pulled over by the police, and a motorcyclist jumping across his pool — all in the span of four minutes.

"I really still can't believe I get to do this."

Perhaps this is also a reason why one can theorize younger viewers — used to scrolling through a wide variety of random TikToks and viral clips — gravitate toward his content in particular. However, with David's own theory in mind, it's also something that could potentially make some of his content alienating to the aforementioned industry folks still trying to catch up with rapidly changing viewership trends and engagement.

By the same token though, David does believe that popular perceptions of YouTube and creators like him are gradually changing for the better, especially as the market continues to grow exponentially. In fact, he says that "everything is going to be a lot more mixed" on the internet in a few years time thanks to youth media consumption trends. And while he admits that it's all "unchartered territory" at this point, ideally, he'd like to continue doing what he's doing right now — albeit with more resources and the organizational infrastructure that would come from inking a deal with a streaming platform like Netflix or Hulu.

In the meantime though, David is content to carry on with his vlogs and continue giving his fans an unfiltered glimpse at his life — and that includes the stuff that you typically wouldn't expect to see from a YouTuber of his status.

Born in Slovakia, David's family immigrated to the U.S. when he was six years old. And though he pays taxes and, by all accounts, grew up as an "American kid," David has been deeply affected by Trump's immigration policies and attempts at phasing out DACA — the immigration policy protecting undocumented people brought to the United States as children. In addition to his inability to travel abroad without risking the possibility of being barred from the country for a decade, David and his family have also recently been dealing with his father's "complete mess of an immigration situation" — all things that have spurred him to speak out on the issue that has become "such a real part of my life."

While David is happy to share experiences like these with the public, he also admits that some aspects of his extreme visibility can be daunting at times. Calling it "one of the trickiest parts" of his job, David talks about how there is "a lot of pressure" online to never misstep ("all the mistakes we make are documented"), which he says is especially tough when you're still learning and growing.

"Sometimes [the backlash] is justified, for sure. But other times, it's a little intense. Like, this happened nine years ago, maybe give this person a break?" he says, before quoting The Dark Knight's Harvey Dent. "It's like, 'You either die a hero or live long enough to see yourself become the villain.'"

Granted, David probably doesn't really have anything to worry about. He seems well aware of the full spectrum of responsibility and expectation that comes with his platform. After all, it's something he's been dreaming about since the days he'd stay up with his parents, watching late night talk shows in their suburban living room.

"One of the things I still sometimes realize is how absolutely, crazy lucky I am," David gushes, before once again crediting his friends with also keeping him grounded and in check. "I can't explain how lucky I am... Like, if I was 14, I'd lose my mind." He pauses, before letting out one last, incredulous laugh. "I really still can't believe I get to do this."