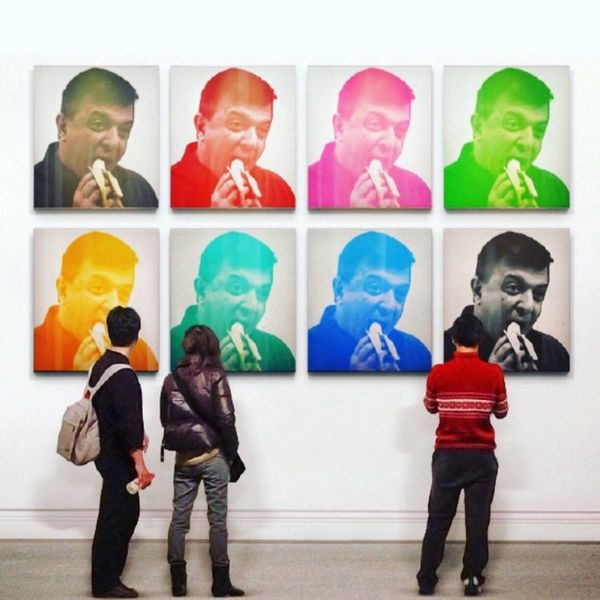 If your claim to fame was eating a $120,000 art exhibit, what would your next move be? Georgian-born American artist David Datuna (aka the person who ate that Art Basel banana) announced Monday in an Instagram post that he is launching a brand new show of his own.

The "Hungry Artist" exhibit will allow visitors to create "their own art using the most common objects found in every New York City bodega." Sounds iconic already.

To rehash the wild saga that first thrust Datuna into the spotlight just a few months ago, Italian artist Maurizio Cattelan duct taped a banana to a wall and it sold for $120,000 at Art Basel in December. With its references to Warholian pop culture, the exhibit — called "The Comedian" — went viral for both its simplicity and shocking price-tag.

That same month, Datuna became a controversial subject in the news when he decided to take the banana off the wall and eat it. Doing this was his own act of "performance art," which he will allow his guests to partake in at the "Hungry Artist" opening tonight.

In a statement, Datuna elaborated on the exhibit, and how it is an extension of his December performance: "What I started with the "Hungry Artist" in Miami is a new way of communication and a revolution of consciousness," he wrote. "What we perceive as materialism is nothing but social conditioning. Any meaningful interaction with an object could turn it to art. I am a hungry artist, and I am hungry for new interactions."

The "Hungry Artist" exhibit will be open tonight, Thursday February 20, from 6 to 8 PM at the Galleria Ca'd'Oro in Manhattan's Chelsea neighborhood. According to Datuna's website, proceeds will go to support cancer research at Mt. Sinai Hospital, where "David has been fighting cancer for the last seven years."

Certificates for the exhibit can be purchased on his website.