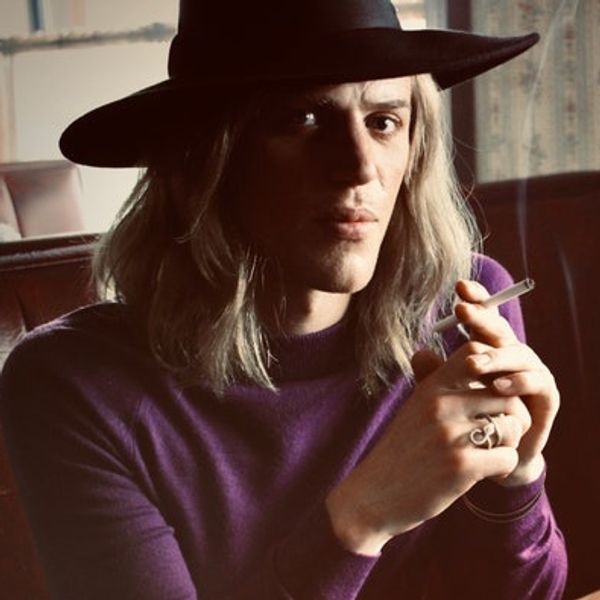 Throughout his career, David Bowie adopted many iconic alter egos that doubled as album titles, tour names and eras, from the pink-haired Aladdin Sane to the emotionally detached Thin White Duke. Each of Bowie's eras are beloved, but none are quite as revered as Ziggy Stardust, the part-god and part-alien character inspired by Vince Taylor.

The late chameleonic artist will be depicted in the upcoming Gabriel Range-directed movie, Stardust, which producers insist is not a biopic but rather, a film. (Bowie's son Duncan Jones tweeted that creating a biopic would not earn his family's blessing). The film stars Johnny Flynn as Bowie and Marc Mahon as his publicist Ron Oberman, both seen in an exclusive first look shared today with Variety:

Stardust takes place in 1971, when Bowie is only 24. At the time, he had already released his self-titled album, Space Oddity and The Man Who Sold the World before unleashing the dynamic characters he is known for today.

In the clip, Bowie explains that Mercury Records had "doubts" about his third album, but Oberman encourages him, saying that it is a "great record" and that he will become the "biggest goddam star in America."

The inspiration for the film was taken from Bowie's early '70s American trips that he later said compelled him to create —and become — Ziggy. Range said in a statement, "I set out to make a film about what makes someone become an artist; what actually drives them to make their art. That someone is David Bowie, a man we're used to thinking about as the star he became, or as one of his alter egos: Ziggy Stardust; Aladdin Sane; The Thin White Duke. Someone I only ever saw at a great distance, behind a mask; a godlike, alien presence. Even in his perfectly choreographed death, he didn't seem like a regular human being."

Stardust was initially supposed to premiere this week at the Tribeca Film Festival, which has been postponed due to the coronavirus. The film will now be available through a private online portal at 4 PM EST, via Zoom and Film Constellation. After an introduction with Range, Flynn, Mahon and more, the film can then be viewed by invitees.

Bowie's Ziggy spawned many cosmic, otherworldly tracks from the eponymous, The Rise and Fall of Ziggy Stardust and the Spiders from Mars. "Starman" and "Suffragette City" were released as singles 48 years ago this month, making the clip arrive at a perfect time for diehard Bowie fans.