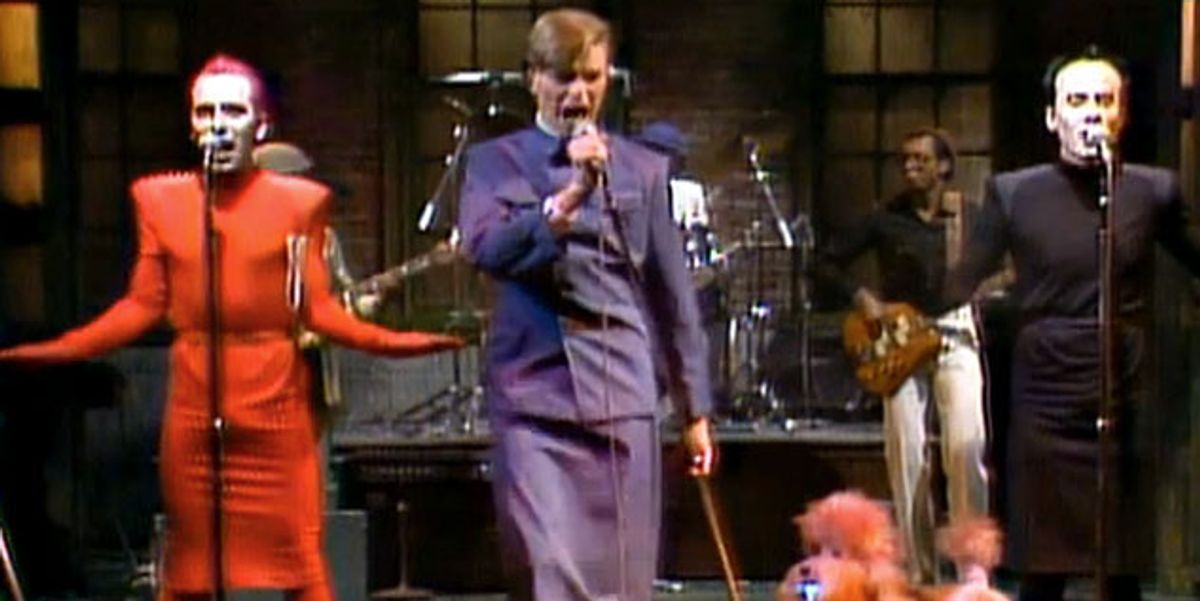 "His Mind Was So Open:" Joey Arias On Performing With David Bowie and Klaus Nomi On SNL

Following the death of David Bowie yesterday at the age of 69, we called up cabaret performer, drag artist and former PAPER columnist Joey Arias to ask him about the time he and his friend Klaus Nomi performed on Saturday Night Live with David Bowie in 1979. The following was told to Kim Hastreiter.

The first time I met David Bowie was at the Mudd Club with Klaus. It was late, around 4 a.m., and we were getting ready to leave. Someone came over and said "aren't you going to say goodbye to David?" We turned around, and there was David Bowie sitting in the corner. This Russian hitman friend of mine -- it's a long story -- had managed to get past his bodyguards and was waving us over to come and speak to him. So Klaus and I go over, and David starts exclaiming over him, "Oh my god, Klaus! I just got back from Berlin and everyone is talking about you. We have to get together." At that point, Klaus was getting famous for his space opera, Za Bakdaz. It was 1979. Klaus and I were both wearing these denim jumpsuits -- I had red hair -- and we both had blazers and jackets on over them with big shoulder pads. He gave Klaus his phone number and said, "please call me." It was very brief.

Now, at this point, David was working a lot with Toni Basil. She choreographed his shows for the Diamond Dogs tour. David was interested in working with Klaus on some shows and trying something new but it was starting to get complicated with travel. But then he was playing Saturday Night Live and felt like this was the perfect time to work with Klaus. They talked, and Klaus told him that I had a singing voice like Billie Holiday's, which made David really interested in meeting me. He told Klaus he wanted the two of us to choreograph his SNL performance and perform on stage with him.

I was working at Fiorucci at the time, and I came home from the store one night. Klaus was sitting there and was so excited. He said, "Are you ready to meet David Bowie?" I said, "What are you talking about, yes!" That was a Thursday and the following Monday we went to RCA studios off 6th Avenue at the request of Bowie's management to start rehearsals. We were wearing our jean jumpsuits again -- sitting in the lobby of RCA for about 30 minutes, just watching people walk by. Finally, this man walked in and said, 'Oh Klaus! There you are!" Then this guy walks over to me. He smells bad, he has a beard, he's wearing bad polyester clothes and these funny shoes. He looked like a pimp, sort of. We start walking back to a studio with him and I say, "Wow, I'm so excited to meet David Bowie!" He turns to me and laughs and I realize this man is David Bowie. I was so embarrassed. He was like, "The David Bowie you see on stage is different than the one you're meeting now."

We walk into this huge studio. He takes us into a room and then we just ended up eating lunch with him and talking for hours. He wanted to know all about us. He was like a child, with his curiosity in people. He just wanted to hear more and more stories about us and our lives and where we were from and how we grew up. He started lamenting that he hadn't met us sooner, since he was at the point in his career where he was done with the Ziggy Stardust stuff. But he kept saying that he knew what we would do together on SNL would be really fun. It was. I pulled a poodle with a television in it around the stage!

The SNL performance was also how Klaus and I got to know Thierry Mugler. David gave me and Klaus $1,000 each and told us to go out and buy costumes for the show. We were looking all over the place. We knew we wanted to look futuristic and utilitarian, but couldn't find the right looks. We couldn't find shit! Finally, we went to Bendels after searching all day, and went right to the women's department. We told the woman there we were looking for something black and something red and she said, "well, we just put them away, but we have these Thierry Mugler pieces." We loved them right away. David was really into them too and had an outfit made to go with ours. I called his outfit the "Chinese airline stewardess" outfit. His band was so not excited, though. They were like, "David, no, no no!" He was supposed to be wearing a suit for SNL, but he saw our dresses and said, "Ooh! I want to match up with you guys!" He gave some orders to someone and a couple hours later they came back with this stewardess blazer and skirt for him. He had another outfit for his second song that night that he couldn't even walk in. Klaus and I had to carry him on stage.

So now it's Friday, the day before the show. Laraine Newman and I had been in the Groundlings together in LA and she was still on SNL at this point. She would invite us to the SNL after-parties at One 5th Avenue, where Mario Batali's restaurant is now, and we'd hang out. She'd get us tickets to shows sometimes too. I always said, "Laraine, if David Bowie ever performs, you have to please, please get me a ticket." So, just to play a little trick on her, I called and asked if she had tickets to this performance. And I didn't tell her we were going to perform with him. I pretended to be devastated when she said there were no more tickets left. Later, Klaus and I were in the SNL studio getting ready to sound check and Laraine spots us and comes rushing over to ask us what we're doing there. We tell her we're there to meet David Bowie and she starts freaking out, telling us we can't be there and that we're going to get her in trouble. She says, "Promise me, the second you see him, you'll leave." And at that moment David, who was in on it too, came up behind her. He says "Laraine, since you couldn't invite Joey to come see me, I invited him to perform with me." She ran away. She just screamed and ran away. It was perfect.

Debbie Harry showed up just to watch us rehearse. She said, "God, Joey, what I'd do to be in your shoes right now." I said, "Debbie, I love you, but it's my turn to wear the red shoes this time." And she looked at me and said, "You bet, baby. You go up there and kill them now."

Then it was Saturday. And we go to the SNL studio to meet David and now he really looks like David Bowie. He'd had his hair cut and it was all cleaned up. We were meeting David Bowie. We could hear his fans screaming for him in the audience before we were waiting to go on stage. He said to Klaus and I, "Let me tell you, today is the day your lives will change forever."

A little while after SNL, Thierry Mugler was having a casting for his show. I think it was January of 1980. Klaus and I showed up at the casting to meet Mugler and we brought photos of us performing with David. He could not believe we were wearing his dresses. He goes, "I can't use you guys in the fashion show because your looks are too strong, but please come as my guest." And that was the beginning of years of working with Thierry.

I saw David years and years later in Paris. He was with Iman and I was in full drag. He kept saying "God, I wish you'd dressed like this when I first met you!" We walked arm-in-arm through Paris and people on the street were going nuts. He was just so much fun. David inspired. He was an alien; his mind was so open. He was like this force, this sponge, that absorbed it all. He was just like a child in that sense, just like a little boy. And he was just full of love.