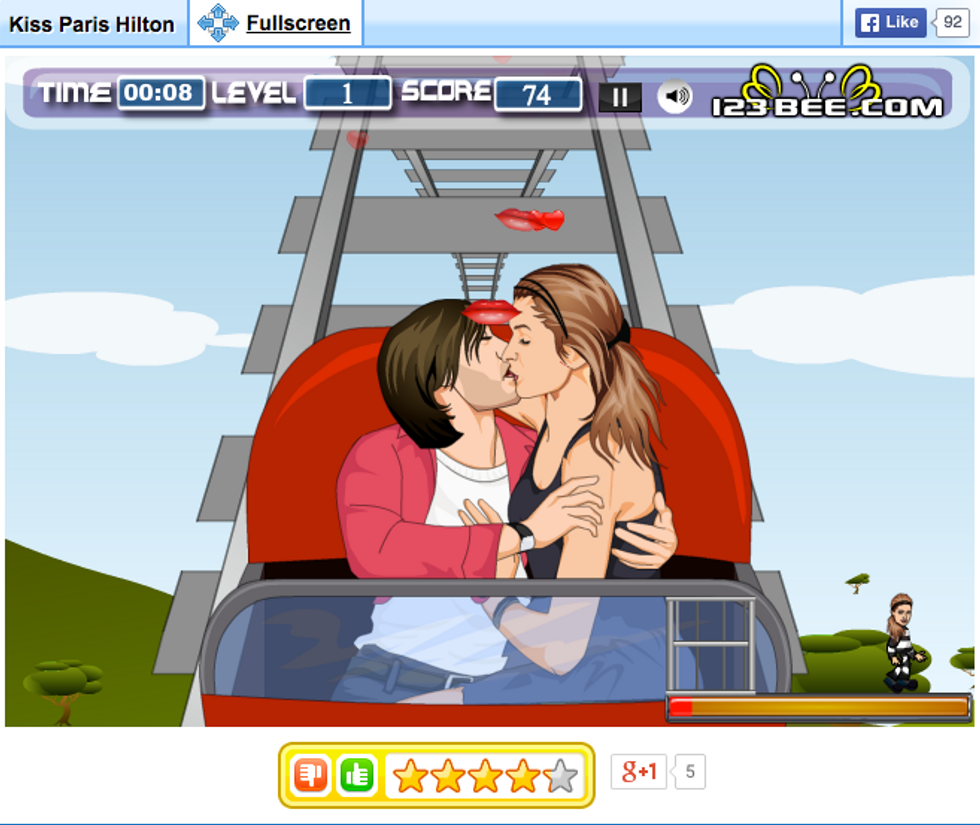 By Sandra Song
PAPERMAG
The Internet is a dark, dark place, filled with the sort of intensely weird cultural artifacts that should've been buried long ago along with my J-14 subscription. Proof of this came to me when I discovered the Zayn Malik dating simulator during a late-night thirst quest and realized that there was still an entire webful of weird, fan-made, choose your own adventure-esque games that allow you to live out a fantasy date with your celeb crush of choice. From getting together for coffee to rendezvous on airplanes to chance "oh my god, I must know you" meetings on the street, anything is possible in these virtual dates. Below are a few highlights from this corner of the web -- which include GOP candidates, cartoon characters and, uh, National Treasures.
Justin Bieber Date
In this GirlsGoGames simulator, you're on a plane and Biebs is across the aisle from. You're both flying coach (sexxy) and are en-route to Beibs' home country of Canada. Beware though, because this one is really Bieber trivia based -- like, the only way you can gain brownie points/progress in the game to an actual date and (finally) to his concert is to know things like who his idol is, where he likes vacationing, how old he was when he had his first kiss, etc. Even better, you can start the emotional manipulation early by accepting his offer of a backstage drink, only to have him frown and recoil if you accept -- apparently he's only interested in sober sweeties who know his preferred concert clothing and the name of his childhood dog. Not to spoil the game or anything.
Zayn Malik Date Simulator
Another one from the GirlsGoGames family, this one is a little more realistic and less about jumping through trivia hoops. This set-up here is less of a self-absorbed celebrity quiz bowl, and more of a sim set up that allows you to pick the least shitty/creepy thing to say in hopes that Zayn will be into it. If you have any semblance of dating etiquette and forget everything Tinder has taught you, you should be making out with this newly single stud in no time. ;)
Caging Me Softly
This game literally last two seconds, but is well worth the download time, because you get to have a series of Weird Cage Facesâ�¢ say things like the above. Choose from 4 possible scenarios, which will either result in a "sexy," "romantic," "good" or "bad" ending -- though after playing through all of the options, I can tell you there's a pretty good chance you'll end up impregnated with the newest member of the Coppola clan. At least his last one turned out relatively normal.
Kiss Paris Hilton
Kiss Paris Hilton is all about getting everyone's favorite early-aughts debutante to make-out on the DL with other stars. Hilton can't PDA with big-dicked Jared Leto, because she can't be photographed kissing another celeb! The solution? Get on a rollercoaster and have Leto and Hilton make out for as long as you can without someone photographing them. That's right, just hold down your mouse and let go when you see a photographer -- and if you manage to achieve a long enough smooch then you get to progress to the next level up with the dude from Sum 41 and Benji Madden
Elsa x Jack Frost -- Don't Let It Go!
Okay, so they may not be "real" celebrities, but no one can argue that Frozen's Elsa and Rise of the Guardians' Jack Frost aren't famous. And I think the fact that they have their very own crossover dating sim is evidence of their...impact. In this particular game, you're Jack Frost, invisible to all but the beautiful (and uh, extra-booby) Elsa who is super stoked to have you hang out at her royal ball.
This one is solidly stuck in fanfic territory and is probably the weirdest of the bunch, especially seeing as how the game design involves you literally just clicking "Next" over and over again until they make out, have sex and part ways. And even though you can choose between things like a "humorous" or "confident" introduction, trust us, you end up in the same, sad situation no matter what kind of greeting you pick.
Romney VEEP Dating
Don't bother. Despite its name this isn't the "dating sim" you'd might hope for, allowing you to act out your wildest fantasies on the Great Bronzed Mormon Haircut. It's literally just a weird Mitt Romney running mate simulator. And believe me, no matter how hard you try, you won't be able to get him to make-out with Marco Rubio :( At least it's just in time for tonight's GOP debates.
You May Also Like
Internet Culture