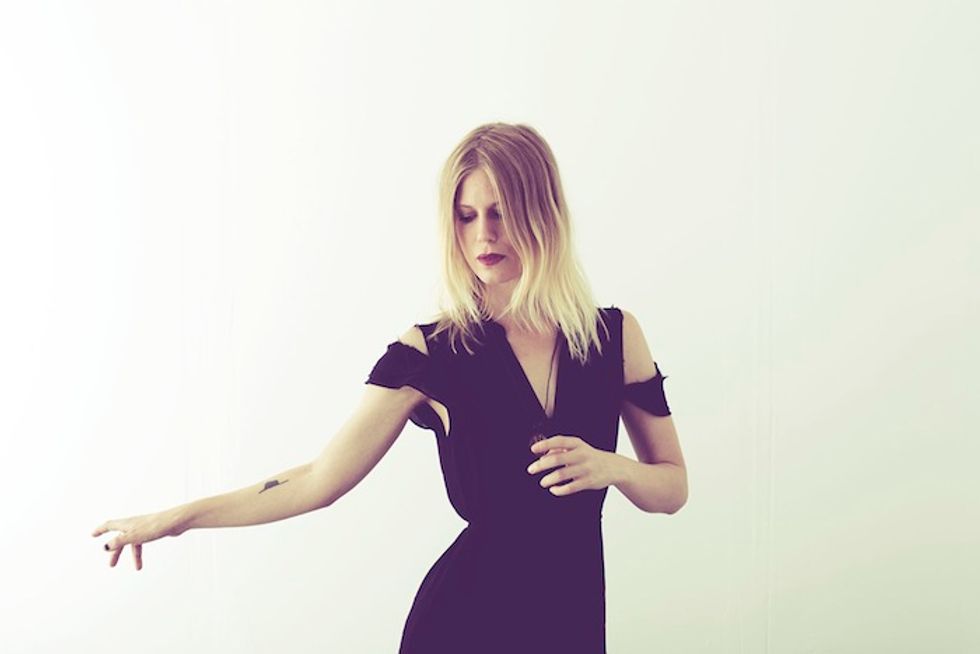 by Kurt McVey / photos by Shan Turner-Carroll
PAPERMAG
Roughly a year has passed since Danish black metal artist Myrkur released her striking -- and mysterious -- self-titled debut EP. Since then, listeners, metal heads and music writers alike have wondered about the one-woman force behind the project, who initially chose to keep her identity hidden. But now she's come forward -- Amalie Bruun, the Ex-Cops frontwoman, Chanel model and excellent Jenny stand-in opposite Michael Bolton's Forrest Gump in a Lonely Island parody video. That Bruun originally preferred to be anonymous is somewhat understandable -- she's exceptionally beautiful and in an industry where all too often looks are valued more than talent, it was a savvy choice to let her music speak for itself and for interest to grow around her songs and not her physical features.
On August 21st, Bruun-as-Myrkur, which means "darkness" in Icelandic, will release M (Relapse), a full length album that blends black metal with traditional Nordic folk music and references to classical compositions. M (actually Myrkur's symbol, the Nordic Rune/symbol of Mannaz {Mankind}) was recorded in various locations throughout Norway and was produced by vocalist and experimental metal musician Kristoffer "Garm" Rygg of the celebrated Norwegian music collective Ulver, whose Wagner-meets-Deafheaven aesthetic is all over the album. But make no mistake, the record and its overall vision belongs to multi-instrumentalist Bruun, who recorded and arranged each individual demo track before taking them to Rygg, supplying most of the album's piano and guitar, as well as her vocals, which volley between harmoniously layered choir arrangements and her ferocious, trademark primal scream.

We caught up with Bruun at Jimmy Hendrix' famed Electric Lady Studios in Manhattan's West Village to talk about her new record, where she got that killer scream and why she sees Tetris pieces in her dreams. Read her thoughts and hear album track "Jeg er Guden, I er Tjenerne," which we're excited to be exclusively premiering, below.