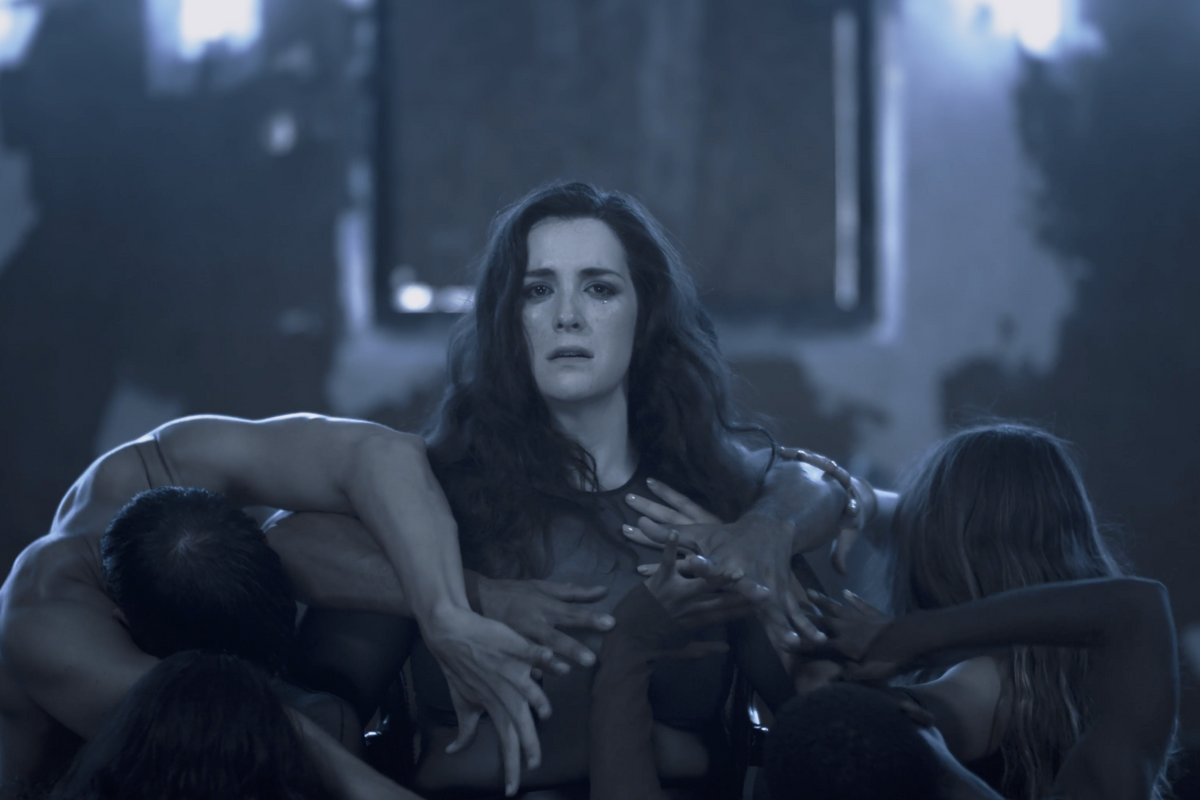 Muted hues of blue, black and nude fill the screen, as a trans woman coping with a debilitating opioid addiction faces her younger self.

The desire to tell a trans story not fixated on transness, but rather a fuller depiction of humanity, is what fuels "Falling," the raw new music video/ "visual album" directed by filmmaker Zen Pace (they/them) and starring actor, writer and musician Dana Aliya Levinson (they/she). The project premieres today on PAPER.

"While it's important that aspirational trans narratives exist, it's also important that ones dealing with trans pain exist, too," Levinson says. "There's healing in collective processing through art. True parity is when we can have a trans lead who is messy, complicated and unafraid of the dark. It's an opportunity that cis, straight, white, male characters are afforded without question."

Levinson's alter ego in "Falling," a character they created named Shira Rose Loewenstein, is searching for a way out of her pain, but is nonetheless trapped by her demons. Dancers intertwine their bodies with Levinson's, visually representing the intense, visceral emotions heard musically.

In many ways, "Falling' is a response to a lack of mainstream trans stories told by trans people not preoccupied with trans identity. Levinson's Shira Rose was thus born as a "sliding doors" version of them, and "Falling" is just the first part of a larger story. FRAUD, a pilot Levinson has been writing and producing that begins filming this winter, is partially autobiographical.

"Many of the issues in Shira's life are pulled from my own autobiography: financial distress, co-dependence, substance abuse and historical trauma," Levinson says. "She became a place for me to process all of that grief outside the bounds of a script. These issues are rampant within the TGNC [trans and gender nonconforming] community and yet they haven't been significantly addressed in entertainment."

To further spotlight this need for representation, in the scenes where Shira Rose faces her childlike self, it was important to cast a young, gender nonconforming actor. Pace and Levinson found an ideal match in Allex Jording, whose pronouns are xe/xir.

"I feel like if there's a chance for me to put queer people or any marginalized groups in positions where they will be respectfully represented and not tokenized, then we have to take it and make that space," Pace explains.

And where Shira is concerned, it was necessary for the creators to show a complex trans character grappling with her unglamorous present, rather than "showing her in the 'before and after' narrative that cis gender storytellers are often fixated on," Pace says.

Pace and Levinson expand Shira's narrative in FRAUD, a story that allows her to fall in love unexpectedly. And trans love is, as Pace says, "something we can all fight for." Support FRAUD's production, which is created by queer, TGNC people and women, by donating here via Seed & Spark.