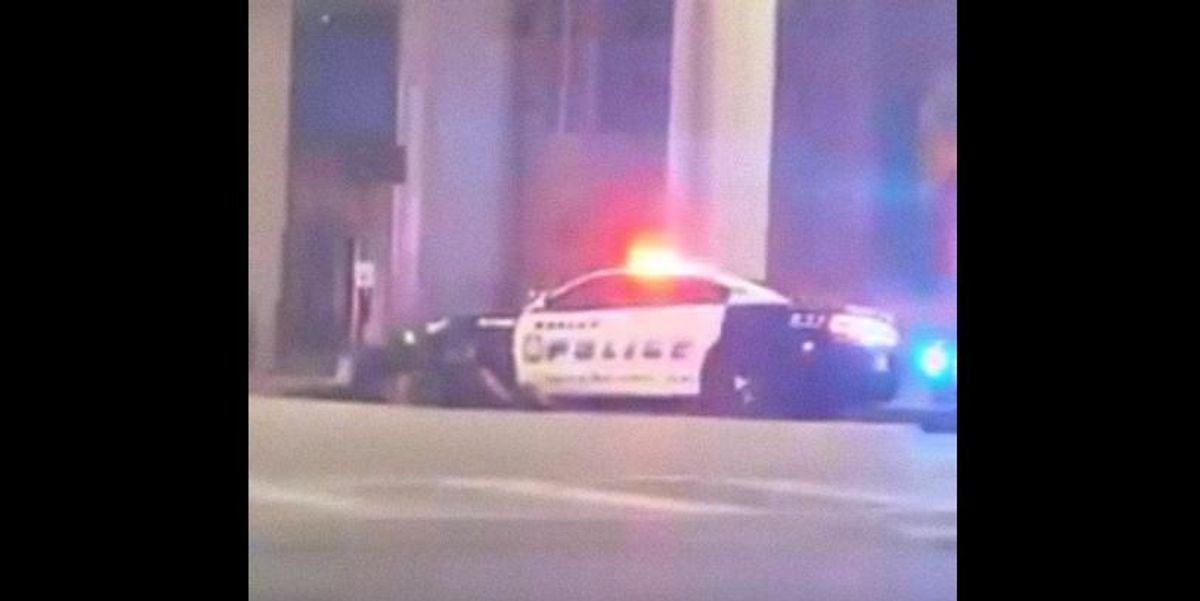 Seven other officers, and two civilians, including a 37-year-old woman who jumped on top of her sons during the shooting...


...were wounded; all are expected to recover.

It is the deadliest attack on law enforcement on U.S. soil since 9/11.

A lot of "deadliest" superlatives lately.

Three of the four suspects are in custody; the fourth was killed during a standoff with police.

This is one of our suspects. Please help us find him! pic.twitter.com/Na5T8ZxSz6
— Dallas Police Depart (@DallasPD) July 8, 2016

This was almost immediately shut down by thousands on social media, pointing out video of Hughes helping people reach safety when the gunfire began.

Hughes was interviewed shortly after, expressing his frustration over the careless profiling, and indicating that he has already received multiple death threats.

According to the Dallas Police Department, the force negotiated with the slain gunman--identified as 25-year-old Dallas resident Micah X. Johnson--for hours before the stalemate broke, and gunfire was exchanged once again.


Dallas Police Chief David Brown confirmed that Johnson was killed by a bomb-detonating robot, and not gunfire, as initially reported; the IED had been placed by Johnson and his fellow gunmen.

In a press conference during the NATO Meeting in Warsaw, Poland, Obama addressed the deadly attack, condemning it, as a "Vicious, calculated, despicable attack on law enforcement."

Obama tied in the tragic police killings of Alton Sterling and Philando Castile earlier this week, which seemingly triggered the shooting last night:

"Let's be clear: There is no possible justification for these kinds of attacks or any violence against law enforcement."

"Today, our focus is on the victims and their families. They are heartbroken. The entire city of Dallas is grieving."Police across America — it is a tight-knit family — feels this loss to their core, and we are grieving with them."

Various leaders of the Black Lives Matter movement also condemned the attacks, stating that violence is the antithesis of what their organization is striving for.

Prayers for the victims of all violence tonight.
— deray mckesson (@deray) July 8, 2016

Dominique Alexander, one of the organizers at last night's protest, emphasized the importance of standing united, regardless of race, in the face of this violence:

This is not a time to play the blame game it is the time to stand together. #NGAN
— Dominique Alexander (@niquealex) July 8, 2016

Despite sensationalist media outlets attempting to solidify "sides" of last night's situations, a majority of eyewitnesses and survivors reported police and protestors working together to save each other.

According to Dallas police, protesters helped capture the shooters. And cops helped shuttle protesters to safety during the attack.
— George Hunter (@GeorgeHunter_DN) July 8, 2016