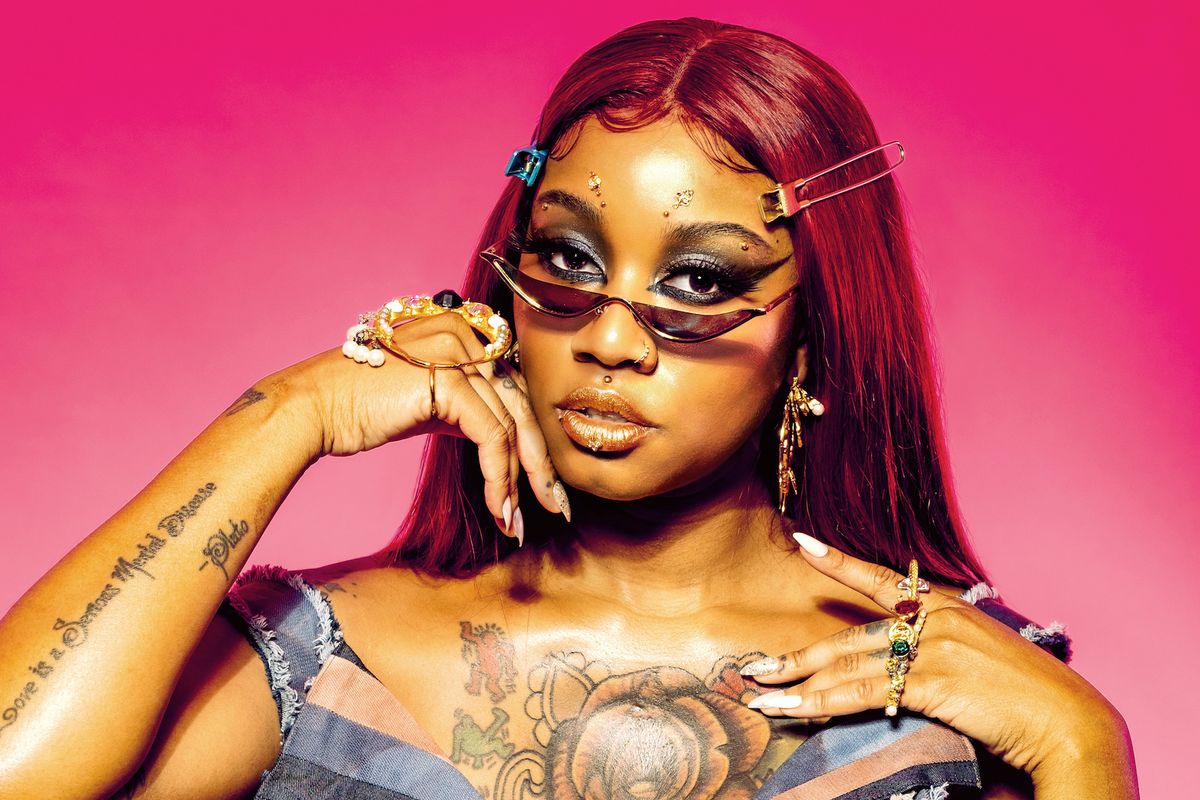 Dai Burger: P Is for Pussy, Power and Pride

When you bite into any burger, you experience a rush of flavors and textures regardless of how it's cooked. If that burger is made with care, that experience is even more pleasurable. New York artist Dai Burger has carefully crafted her own multi-genre, club-based sound for most of the last decade. She's poised to enter 2020 with a bang, having released last month her sophomore album Bite the Burger.

The LP's tracks, which features peers like Cakes da Killa and Baja Frequencia, are a fresh and playful mix of trendy pop, flashy hip-hop and gritty sounds encapsulating the queer NYC nightlife scenes she's involved with. They all work to present a version of Burger who is more empowered than ever (see: the regal album art), and wants everyone listening to join the party. Burger assures as much on lead single "Vitamin P," rapping: "Burger be serving all of your needs/ P for pussy, P for power, P for pride and prestige."

Much of Burger's confidence comes from her rise to prominence as a self-made artist, a penchant for being "a little extra on purpose," and a desire to give back to the communities she's a part of. One example is her educational, New York-based foundation, called Where My Girls At, supporting the creative ambitions of young women of color. "I wish I had a me growing up," Burger says. "Now I'm here. And I don't have any brothers or sisters, so I feel connected to the children in a way."

PAPER caught up with Dai Burger on the heels of her album release to discuss the making of it, her journey as an independent artist, and the Law of Attraction.

It's been a couple years since the release of your 2017 debut album, Soft Serve. What was cooking for you this time around?

I pride myself on finding the medium between all of the genres. I've never been glued to one. When I did my last album, I thought I was a singer, so I started rapping and I saw people took to the rapping a little more, which allowed me to introduce my hip-hop side mixed with house beats. So for this album, I played with old dance music, being a part of the culture, and I found a way to bring them all together. On the cover you see me in my queen status. I feel like I am the master of what I'm doing, and I hope it's resonating.

I remember meeting you in 2011 at the Patricia Field store when it was still open in the East Village. You were working there and told me you were working on launching a music career. Here we are!

Wow, that's so dope. Everybody starts somewhere! Pat is still the illest in the [fashion] game and I'm so glad to have her as a mentor and a boss. She was one of those who helped shape Dai Burger today. But way back when I was starting, it was a different universe because it was the start of SoundCloud and the beginning of viral music.

Those early streaming platforms launched an era for independent artists to be more self-reliant than ever. You're living proof of that.

We are the machine. And the Millennials, we are the curators and creators of the DIY era. You don't need the machine behind you the way you used to, because you can have a cell phone and you're in business. You can do anything with a laptop and a dream. If you're an up-and-coming artist with no label, nothing is impossible and you can still be seen by lots of people.

What is the biggest change you've noticed in yourself from when you were starting out to now?

I see myself trying to keep up with the trends because I could get stuck in my own ways and trust me, I'm good at it. I'm an Aquarius, so I get stuck in certain ways if I'm not careful. But I'm always still looking to what's hot now, what's going on, and what people deem as cool, and I find a way to put my own twist on it. It's also like working in fashion because you have to still know the trends, but learn what you can flip and make your very own. There's nothing wrong with that, it keeps you fresh and engaged.

On the album intro, there's the line: "I was the only kid in high school that looked like I had a stylist." Were there early role models who inspired your confidence?

Growing up I had a single mom, so she was a strong example of what it meant to do for yourself. But I'm a girl of the '90s and 2000s, so I was looking at TV for most of my inspiration. I didn't have anyone in my immediate environment. Seeing Missy Elliott changed the game for me, or people like Gwen Stefani. I loved female artists who went against the grain because that helped me see that what was different about me was worth celebrating. So with that line, I was the flyest because of my mom and felt that, even if I didn't have the flyest gear, it emanates from my being.

Even though you're an independent artist and still fairly early in your career, you're already giving back. What can you say about your foundation?

It's called Where My Girls At, and we meet at my home studio, which is called The Brewery in Brooklyn. I host workshops and bring in other artists to talk about songwriting, production, and learning about what goes on behind the scenes of making music. It's mostly young girls and women of color ages 9 to 18. As I mentioned, I didn't have a person that could steer me clearly toward music — to tell me that there's a future in that world if I wanted it. I had to figure that part out on my own. I'm just glad to come back to girls from the New York City area and be able to say, "If I can put my mind to anything, you can too, so let's figure out what you like and how you can make dreams come true."

"It boils down to this: What you put out there is what you give back. That's it."

Who would you say is the quintessential Dai Burger listener?

It's the person who loves fashion, who is getting cute to go to work, giving that little bit of extra on purpose before you leave the house. That person on the train trying to get into their everyday vibe pumping up and down the stairs, feeling it. People who shine brighter than everyone else in public even if it seems off. It's never "off" to shine.

Are you planning to tour?

I want to tour. Performing is the heart and soul of all of this. I started out as a dancer, I've been dancing all my life. My underground performances are just wild and crazy. That is mostly how I provide for myself. I love traveling, I've been around the world because of music. That's big for a girl from Queens [Laughs]. I want to keep going, and I want to keep traveling and working and spreading love and energy. It's a party when I show up.

I love that spreading love and positive energy is a regular goal of yours.

Yeah, no doubt. There's too much hate out there otherwise. And it boils down to this: What you put out there is what you give back. That's it. Be mindful and use your energy wisely.

That's honestly so nice to hear.

I'm glad to hear that. You're going to have a good day now, right? Can't you feel it?