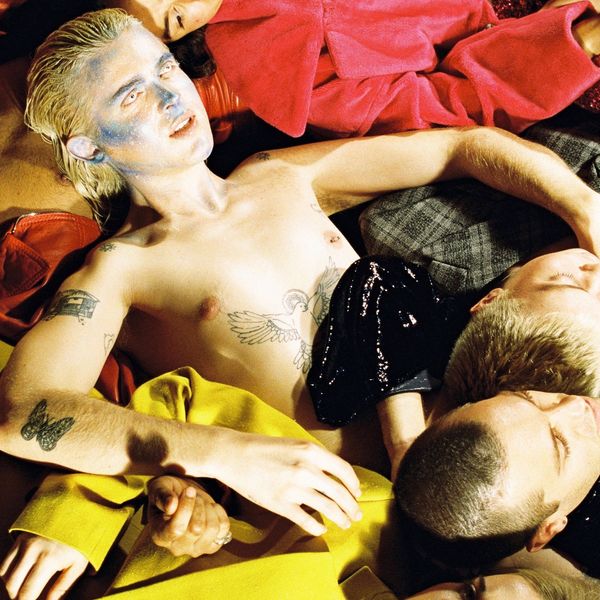 Australian pop band Cub Sport, comprising queer married couple Tim Nelson and Sam Netterfield, Zoe Davis, and Dan Puusaari, have been following (and conquering) fear across the U.S. since dropping their self-titled third album earlier this year. While touring major cities, they have a chance to spread their message of radical self-acceptance and love to crowds both large and intimate.

"Limousine" is one song resonating with audiences for those reasons. With instrumentation combining tightly wound synth-pop and spacey sound effects, it sets the stage for Nelson's cathartic lyrics to shine. "I can see myself gliding on the surface now/ I can feel I need it deeper, can you show me how?" he sings, as if holding his breath. Then comes permission to speak freely, and thus, an exhale, a release: "'Cause fucking you is like DMT/ I wanna set our spirits free."

Today, the video to "Limousine" premieres on PAPER, and it's as dreamy as the song itself, featuring direction and styling by Tim Hardy and Kurt Johnson, who Nelson calls a "queer dream team." Nelson and company rock some ghostly makeup by Kate McWilliam, pop bottles, and open the sunroof of a moving limo. Super 8 filming adds an otherworldly touch to the visuals.

"It's an ode to deepening developments in love, sex and spirituality and the way I feel like they're all intertwined."

"I wrote 'Limousine' at a time when I was starting to open up about a bunch of things I'd never really said out loud before, a lot of which involved my sexuality — something I'd learned to feel ashamed of when I was growing up," Nelson says. "This song was inspired by that feeling of being completely exposed while I'm still figuring myself out and working through things. It's an ode to deepening developments in love, sex and spirituality and the way I feel like they're all intertwined. The closing section of this song feels like some sort of other-worldly rebirthing or shedding of a former-self and right from the first demo of this song, I envisioned a video that captures the heightened energy and other-worldly vibe that this song holds for me."

Watch Cub Sport's "Limousine," below, and get a ticket to one of their upcoming U.S. tour dates, here.