Dante Decaro sounds worn out. Heading homeward, which is to say Canadaward, on the FDR Drive after several weeks performing in dives of varying ambiance throughout the upper United States, he has good reason to. Wolf Parade, his adoptive rock outfit, are exhaustingly exuberant in concert, howling and impassioned and at least half drunk, which will take its toll on a touring band whether they're careful or not. "It was totally good," he says evenly. "It was kind of our first real tour." When I ask if any crazy shit happened, he assures me that it did. When I ask him to elaborate, he demurs. "It'll take too long to explain. But funniness definitely ensued." I do not press the issue.

Decaro, who joined the band as a touring guitarist a few months ago, has the presumably privileged perspective of having done this sort of thing before. Wolf Parade have been touring in support of their justly hyperbolized debut LP, Apologies to the Queen Mary (released at the end of September); Decaro's old group, Hot Hot Heat, traced similar steps three years ago after releasing Make Up the Breakdown also on Sub Pop, also the band's first to get widespread attention, and also exciting in a decidedly familiar way. "It's been pretty much the same venues and the same people," he muses. "Obviously it was different for personal reasons, but the actual process was surprisingly similar."

The rest of the band, having played intermittently with acts like Frog Eyes and perennial point-of-reference the Arcade Fire, didn't seem particularly wide-eyed or shy either. Their live show is giddy, unrefined, and not entirely satisfying; they take their sweet time setting up, dick around between numbers and share opaquely charming banter with the audience, and play their songs too fast or too sloppy. But then it's almost certainly imprudent to expect otherwise from a Wolf Parade show: professionalism isn't the reason Apologies is one of the year's better albums, nor is it even very frequently the mark of a good rock show. The band played an outdoor set at Bard College in moderately pouring rain with little apparent reservation, then sheepishly referred to their still-soggy equipment in New Haven the next night. They lost most of their power on stage during one of their New York dates, and so launched into an impromptu cover of Paul Simon's "Graceland." Wolf Parade concerts do ample justice to the recklessness and energy of their records and the sheer enthusiasm with which they make ugly things sound strangely pretty, for what it's worth which, judging by each night's attendance is a fair amount.

"The shows are mostly sold out, which is a good sign you can't really argue with that, I guess," says Decaro of the group's ascendant popularity. "But I almost feel like every band is doing well; it's really hard to know where anyone actually stands in relation to anyone else. Everyone just tells you good things all the time." Still, it's not so hard to imagine that he speaks for his even-greener bandmates when he reflects on the degree of difference a receptive audience makes: "If I'm having fun, then I probably don't really care."

Maybe professionalism will come with time for Wolf Parade; maybe it won't, and maybe it shouldn't. Isaac Brock's comparatively measured production on Apologies is one of its primary virtues (particularly compared to the band's three eponymous EPs), but there's still something reassuring in knowing that Wolf Parade: Unplugged would sound like shit. If the band are concerned with such things, now is not the time to discuss them. In their brief vacation before taking off for Europe, their priorities are simple: "Chill the fuck out, sleep, do laundry," Decaro thinks out loud, "try to lose my tour gut. Try to be normal for at least a couple days, if that's at all possible." He pauses to hand a beer to someone in the van (presumably not drummer Arlen Thompson, who's driving), and signs off with all the glamour and charisma he can muster. "We can be funny, trust me." 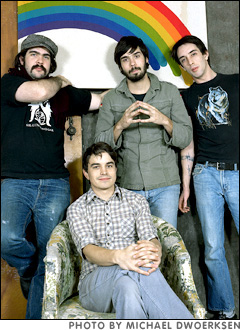 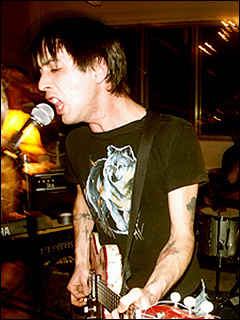