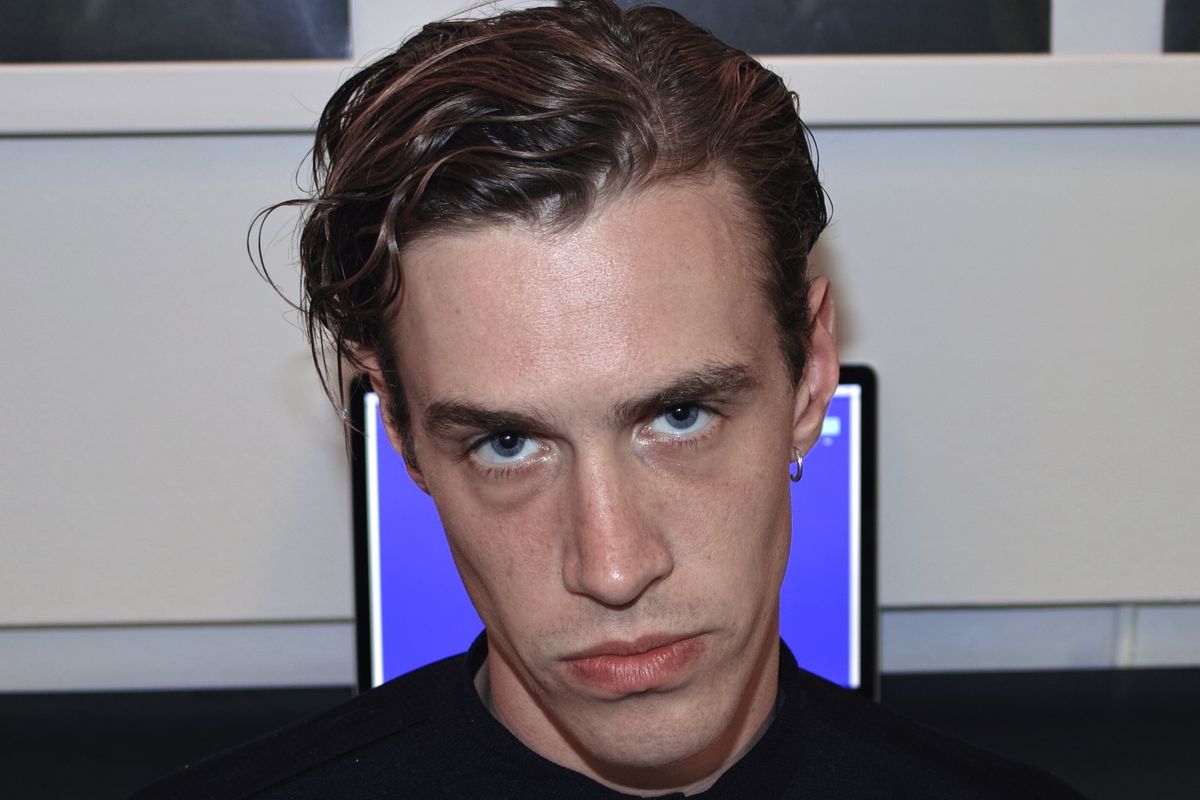 Approaching electronic sampling via the very Dadaist concept of collage, Love Means Taking Action -- Loke Rahbek's latest release as Croatian Amor -- is an assemblage of visceral textures, meandering narratives and unabashed back-and-forth. An intriguing drone-heavy, ambient project that's conceptually-heavy, to say the least, it's a simultaneously alienating and alluring release that attracts via its strangely ethereal yet somehow everyday familiarity. However, what makes Love Means Taking Action even more fascinating is its unusual release method. Because while you don't have to send in a nude this time (à la Rahbek's last release, The Wild Palms, the concept of which centered on the reciprocity of vulnerability), you are still able to give a bit of yourself to the release thanks to the public domain. Because starting today, the stems for Love Means Taking Action will available for download via the album's website -- a quote-unquote open invitation for anyone to use as "they see fit."

Made from the aforementioned stems, these eight remixes from the likes of WHY BE, Yen Towers and Age Coin, which run the gamut from industrial crunch to laid-back lounge, are a true exhibition of how much one can do with a few simple stems -- or "bricks," as Rahbek dubs them. As such, we wanted to dig a little deeper and wax poetic about the infinite scroll, reflect on mixtape culture and, of course, the album itself -- listen below.

Why decide to revert to a "more traditional" release this time around again? In the sense that you're not asking for nudes?

I like this feeling of finished pieces [that standalone]. There's something nice about closing chapters, and [by doing this release in a completely different way, it allowed me to be] like "okay, this is done." To close something. And The Wild Palms -- with the nudes -- was an experiment. And I think that it was a very rewarding experiment, but there wouldn't be any [point in repeating it]. That's done now, so there wouldn't be any point in returning to that message. I would be walking backwards. So here we are now, doing something else.

So where did you get the idea to release the stems from then?

I've run a record label for many years, and started around the same time I started making music, so it's always been an integrated part of my understand -- [the idea] that making music has also been about releasing music. And a few years ago I started thinking about this method of how a piece of music is made, and then it's put out as a CD or tape or a digital download code or whatever. And then it's out, it's done -- like it's dead. It's a fixed frame and it stays in that form till someone throws it in the garbage somewhere.

So I started getting interested in music as performance and [how it's contextualized by different] distribution methods. And looking at a lot of things like early rave culture in the UK, pirate radio traditions, mixtape culture -- and, now, stuff like Soundcloud, digital mixtapes – all these things where it's not about who's making the music, but...putting your work into this greater thing. [It doesn't matter who made the white label when the song is being played on a] radio station or dance floor or whatever -- and I found that so enriching, somehow. It was less about this classic "male artist" syndrome and [more about] a collectivism somehow. And i think there was something similar i found when i first got attracted to noise and cassette culture years ago. You could find all these projects that would do one or two releases and then change alias and do something new, and that mystique, figuring these things out, these hits of certain aesthetics that were never tied to any performer or artist, just a space to be in for a while. No rock and roll circus, just music, just a room.

A lot of electronic music -- or the kinds that I do and – a lot of it is sample based. It's made from either samples that you [record] yourself or samples that you [take from other people]…there are many ways to go about it. But essentially, it's taking bits of sound and arranging them on top of each other. Compressing them, seeing what works with where and how this all changes if it's put into another section. You have all these bricks, these pieces [a track is] made out of, and [when I was doing] this record, it was a lot of resampling and reusing and reappropriating -- like decontextualizing things and seeing how narratives change in connection to what they are put against.

Definitely. It's interesting, though, because you cite a lot of cultural institutions intrinsic to UK dance, like pirate radio and rave culture. How did you, as a kid in Copenhagen, get into that stuff?

It doesn't have to be UK though. Its ideas and they That's not the culture that I come from in any way. There's been a crossover in the last few years between electronic experimental music and dance music, like techno music and that world -- and through that connection, I've gotten to meet [and experience these aforementioned cultures]. I come from a very noise, punk, industrial music background -- and then all of a sudden, there's this cross-section. [And with the Internet], all the information is there just to grasp. It's not like it was thirty years ago, where you had to choose if you were going to listen to punk music, or if you were going to listen to rap music, or if you were going to be a house DJ. Now you can, if you have time on your hands, investigate all different things, and see they have some interesting elements and less appealing elements and there's something about this kind of collectivism [that appeals to me]. But there's something about the interaction between music and presentation and audience engagement that was different from what I had seen before and was really intrigued by.

Rewinding a little bit, what would you say distinguishes Croatian Amor from your other musical endeavors?

Well everything always overlaps in ways, but there's something about [Croatian Amor that's more about] dissecting. In some ways it's not that different [from my other projects]. But I don't know, it's a surprisingly difficult question. It's like you don't want to wear the same clothes everyday -- like, you have a wardrobe...One day, you get to wear a dress, and another day you get to wear a pair of military boots, and they're nice, but they are for very different things. But sometimes you wear a dress with military boots, and then we're really getting somewhere. Maybe this project is that – it's like a dress and military boots, where the others are usually a bit more, sort of [one or the other]. This is a place you get to play dress-up anyway you want, like there's no dress code.

That's an apt analogy. But a theme a lot of your work seems to deal with is that of love, which plays into desire and lust -- whether this be reflected in album titles, asking for nudes or even the name of this project. So if romance is songwriting 101, how do you think your view of the subject differs from others?

I don't know if it differs, but I do think that if we're going to talk about like love and lust, we're essentially talking about human relations, and the thing that's so wildly interesting about human relations is that you never have quite the same relation to one as you do to another. I guess, that's why it keeps being interesting. It's always slightly different So, even if [love, lust, etc. are] songwriting 101 – or whatever you call it -- it keeps changing. Humans are so weird and confusing and interesting and disgusting and funny and it would be hard to come up with anything else to make music or anything else about.

It's always going to come back to one person meeting another person, and I think, actually, this record is a lot less about romantic relations than in the past. While it is about love, I think it's a lot different. It's a more practical approach, I think. And less...ego-centric, maybe?

I was reading the press release as well, and it compares the album tracklist to the experience of submitting to the infinity scroll of a social media feed. Can you, maybe, talk a little bit more about that? Was that a theme you intentionally tackled?

Going back to what we were talking about before, when you said love and lust, I'd like to not call it 'love and lust,' and call it 'relations' instead. Or human interactions. We're in a very exciting moment, and in some ways, a very scary one also, where a completely new language has been made. We're interacting with people in completely different ways, like what we're doing right now [on FaceTime], it's crazy or it would be crazy 10 years ago rather. This flux of information that we live in now, I think -- and I can only speak for myself -- we're still figuring out a way to maneuver in it. And it's like a language where all the sensibilities haven't really been invented yet. Like, what makes a language interesting, one from the other, is that there's all these small [things] – like you say one thing, but it really means something else. It gets refined over the years, right? This is like a brand new language, and the communication that comes with that...takes me some getting used to. Seeing Syrian refugees being beaten next to a clip of a cute newborn cat, next to a picture of Kim Kardashian, next to a picture of my friend's new studio, next to a picture of someone's family get-together, next to a picture of that crazy guy that might be USA's next president if you are not careful, it's like an absurd web of collages that rub off on each other [and impact your perception of the world]. It's like that thing I talked about before, with resampling and using that to build music. Things rub off on [each other and are to an extent dependent on] what they stand next to. I'm not against social media, or against the new forms of communication – I find them exciting -- but it's like you need a new sensory system in a way. And a bit of this record deals with what that sensory system is – or asking what that sensory system is rather. Asking what logic can justify one hand building a fence to keep people out, while the other swipes right on a tinder profile.

Ha, well you do know that this particular publication played a big role in Kim Kardashian's current notoriety.

I'm not saying anything bad about, and I'm not against popular culture. I'm just baffled by it sometimes, and amazed by it – and, like, disgusted also. But all these things, it's about context really, right? And how that changes things. Its crazy how similar the once radical ideas of collage and cut-up are so similar to browsing through a social media feed today. We went from seeking out information to having to filter information.

It's also interesting to me how social media has made it so much easier for incorrect information to spread, or you know, decontextualize important things.

But [that's what] people were always doing. All over Europe, not very long ago, there was also a lot of misinformation being spread. maybe the process is faster, but then there are also more voices, more opinions now.