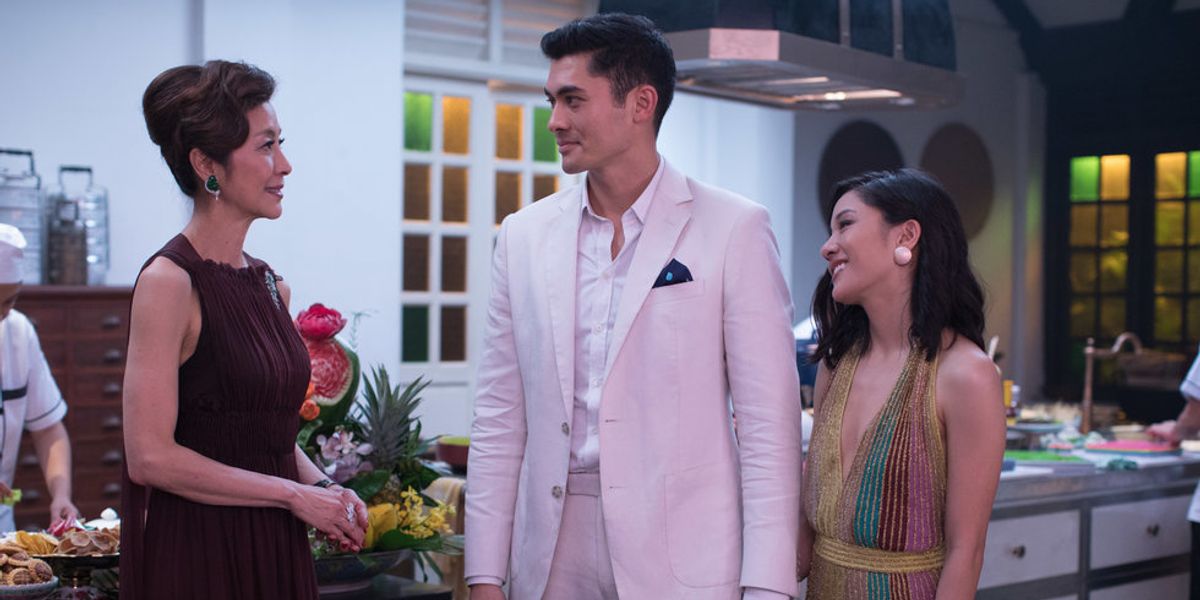 What 'Crazy Rich Asians' Left Out

You may already be familiar with the premise of Jon M. Chu's hit rom-com, Crazy Rich Asians. A New York-raised, Asian American woman, Rachel (Constance Wu), visits her extraordinarily rich boyfriend Nick Young's (Henry Golding) family in Singapore, her potential mother-in-law Eleanor (Michelle Yeoh) hates her, girls try to sabotage her, and Rachel and Nick must decide if love matters more than money and tradition — you get the drift. What's significant is that it is the first mainstream Hollywood movie in 25 years to feature an entirely Asian cast. It's rightfully garnered heaps of praise for this rare and overdue embrace of representation, but the film still focuses on a niche group within the Asian demographic — wealthy and East Asian.

In the trailer, we're treated to the gilded world of the Young family: European-style mansions, servants, luxury goods, suits, gowns, and manicured socialites with American and British accents. The images of wealth and privilege make Crazy Rich Asians extra complex. On the one hand, the film signifies that Hollywood has finally decided that Asian-centered stories are worth telling. But while it showcases wealthy Asian culture to the fullest extent, giving exposure to communities that while privileged are still marginalized by race, lower income Asians are left completely out of the dialogue. Given that Crazy Rich Asians is a trailblazer of its time, it's important to consider the intersectionality — or lack thereof — in the film.

Crazy Rich Asians is set mostly in Singapore, which was colonized by both Japan and Britain before becoming an independent republic in 1965. Countries like the People's Republic of China, Singapore, Japan, South Korea, and India's economies all developed later in comparison to countries like the U.S. and England. Yet despite later explosive economic growth, the wealth gap in both East Asian and South East Asian communities is staggering. With some of the nation's poor living on less than $1.90 a day, it's clear that the family in Crazy Rich Asians does not represent the majority.

Naturally, this did not sit well with some viewers leading up to the film's release.

While Asian-Americans are finally being represented in the media alongside their white counterparts — the specificity of representation is interesting. Crazy Rich Asians still relies heavily on the model minority myth — that Asian Americans are all well educated, relatively wealthy, and don't threaten the status quo.

Related | Henry Golding Is the Next Hollywood Heartthrob

In the trailer, for example, a Donald Trump look-alike stares at our movie couple at the on-plane bar. That scene is to illustrate Rachel's glimpse into her boyfriend's world, one that may be in close proximity to wealthy white people.

Originating in the 1960's during the Black Power Movement, Japanese and Chinese Americans were deemed the "model minority." By comparing them to other people of color, Caucasian Americans could toss out any accusations of racism, essentially saying "If Asian people can make it, then why can't you?" to those who called out America's racist past and present.

When it comes to immigration, privilege also accounts for who is and isn't allowed in to the country.

One of the popular methods of moving to the U.S. is via a H-1B visa, which allows highly skilled workers to stay up to six years (more if they have a green card application pending.) Since higher education itself can be expensive internationally, Asians who were privileged in their respective countries tend to have a better chance of immigrating to America. Juxtaposed against how it's nearly impossible for certain other nation's peoples, like Mexico and Syria, the privilege is undeniable. Under the Trump administration alone, more than 2,000 children have been removed from their families at the United States border under the "zero tolerance" policy on illegal immigration by Jeff Sessions.

All this cultural baggage only intensifies the Crazy Rich Asians storyline.

In the film, Rachel is privileged as a professor of economics who lives in New York, one of America's most expensive cities. But internationally, she's less well-off compared to her boyfriend and his family. The film heavily focuses on the Singaporean family and their extravagant lifestyle, while the majority of non-Singaporeans in the mansion scenes are either servants or the help.

While the film breaks many barriers, it also perpetuates harmful stereotypes about Asians that hurt low income Asians as well as other people of color. Rachel is still a highly educated professional who may in the future further increase her capital, even if she feels shocked by her boyfriend's wealth. If Jon M. Chu and Kevin Kwan really wanted to push the envelope, they could have written Rachel as a working-class person, an image of Asian Americans that is rarely seen (her mother is portrayed as lower middle class in the film, but Rachel's education level suggest she's already surpassed the class level she was born into).

Still, not every single movie centering people of color needs to be a politically-progressive, groundbreaking masterpiece that perfectly encompasses every single struggle we face. Artists of color shouldn't be expected to make perfect, politically conscious art when the same expectation is not upheld for all white artists. What we should note is where PoC art goes in the future and make an effort to give equal representation to all people of color, not just the rich.

Privately I am thrilled that Crazy Rich Asians exists, but on a grander scale, the satisfaction is short lived. I hope that the next all-Asian film we get properly reflects the complexity of Asian-identity — wealth, poverty, privilege, disadvantage, immigrants, children of immigrants...the whole pot.