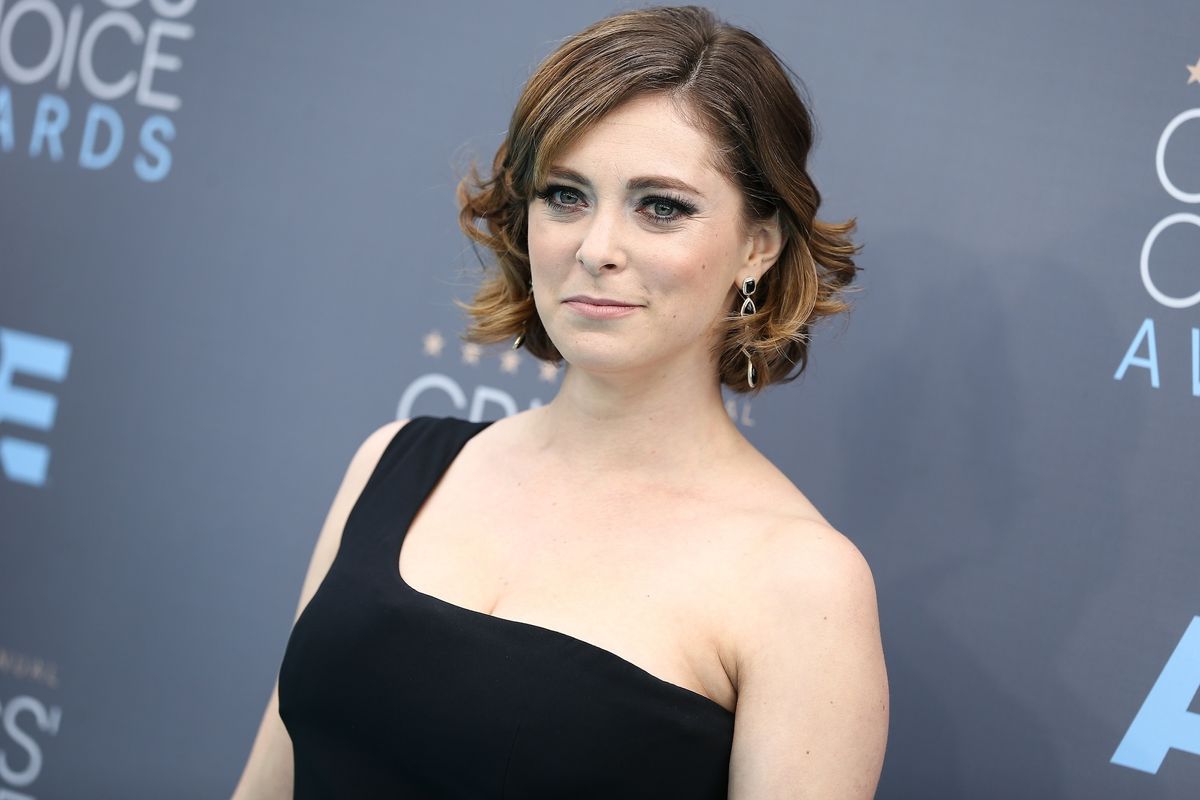 The Golden Globe winner talks to us about her hit show ahead of its return from hiatus tonight.

It's been a good year for Rachel Bloom. The multi-talented former theater kid has made the leap from making wildly popular YouTube videos (like the horny nerd anthem "Fuck Me, Ray Bradbury" and the Hebrew school fantasy "You Can Touch My Boobies") to co-creating and starring in the CW's new musical comedy, Crazy Ex-Girlfriend, for which she recently took home a Golden Globe. For those who don't tune in yet, the show follows Rebecca Bunch, a high-achieving and deeply depressed New York lawyer who drops everything and moves to West Covina, CA ("Only two hours to the beach! Four in traffic.") after a chance encounter with a teenage boyfriend.

The remarkably assured pilot received the kind of critical acclaim network executives would trade their firstborn to guarantee, and has gone on to mine Rebecca's relationship with the move-inspiring hottie Josh Chan (Vincent Rodriquez III) and her budding attraction to Josh's friend Greg (Santino Fontana) for cringe-inducing humor and surprising poignancy. It has also fleshed out Rebecca's relationship with her confidant, Paula (Donna Lynne Champlin), using a relationship totally centered on talking about a man -- which Bloom has referred to as a purposeful failing of the Bechdel Test -- to develop a fascinating picture of female friendship. With the series returning from its mid-season hiatus tonight, Bloom spoke to Paper about creating her first show, diversity on TV, shit attacks, and the world's best audition song.

Congratulations on your recent Golden Globe win! How are your castmates dealing with the pressure of acting opposite a Golden Globe-winning actress?

My cast mates are crumbling. Pete [Gardner] has started addressing me as "duchess." Santino [Fontana] can't look me in the eye without crying. Donna Lynne [Champlin] has developed a nervous tick in which her eyes bleed. It's a shitshow over here.

How do you think the awards attention will affect the future of the show?

Two awards within a week is a big deal! I'm so excited for what this official, prestigious acclaim means for people finding the show and giving it a chance. I'm so proud of this show and I want as many people to see it as possible. Whatever happens, this elevates the show's rep.

Going back to the beginning of all this, your pilot had a really strong voice right out of the gate, which makes sense since you come from a sketch background. But how did you adapt to the process of telling a long-form story?

My co-creator is Aline Brosh McKenna, who is a brilliant, brilliant screenwriter and brilliant at story, and I've learned so much about arcs and plot and character just from working with her. When we pitched the pilot to networks, we pitched the whole series arc. So it's not like we just went in pitching, "Here's what we think the characters are and here's what the pilot is." Before we even pitched the show, Aline and I just spent a couple of months working together to discuss what the show was and the characters and where the show could go. Then, when we were [originally] with Showtime, they ordered two more scripts from us. So, while we were working on the pilot, we were also thinking about the two future episodes, which had us thinking about the entire season arc. We actually went into this with a lot planned out.

The characters are really diverse and specific. Was that specificity and commitment to diversity planned all along, or did that happen through the casting process?

It was always a plan the second we knew we wanted to set the show in southern California. I grew up here, and something that's great about southern California is that it's so diverse. I feel like the West Coast in general, especially southern California, is just super diverse and mirrors the rest of the country. We're a nation of immigrants and it's not just New York City that's a melting pot.

Characters live in specificity and I've learned so much from Aline about how specific you need to get with character. The first day we met, she was like, "Okay, so what was Rebecca's childhood like? What foods does she like?" She really got in depth from the get-go. So Josh was always kind of an Asian bro to us. And then, when we cast Vince, who is Filipino, we made him Filipino. And, with that, it's like, "If that, then what else?" It's like an improv. It's "yes and"-ing. So, if he's Filipino, what's his life like? What's his family like? In West Covina, especially, family is very important. Your culture is not all you are, but it's a big part of who you are. So, that specificity was always there and always really important.

Rebecca could easily be a manic pixie dream girl figure, but I appreciate that you guys go for the darker corners of this type. She's allowed to be petty and self-centered and have diarrhea a lot --

Yes, shit attacks were very important to us. We just wanted to be true to our own experiences. I think because it's a show created by two women, we wanted to take that stereotype of a crazy ex-girlfriend, and take that very stereotypical phrase and be like, "What does that even mean? Why do we let love overtake us?" And the most dynamic character was someone who was otherwise very smart, otherwise very logical, but who was very unhappy. The dumb way to do this show would be like, "She's a happy person until she meets this guy, and then she gets sad." No! Someone who moves across the country for a man is going to have at least depression, if not a bunch of other issues and problems.

You see a lot of manic pixie dream girl tropes, and some are done well and some aren't. But the fact is, when someone is that quote-unquote adorkable or quirky, there's often a social anxiety or there's a social disorder. They do it really well in The Eternal Sunshine of the Spotless Mind, where she's very interesting and very quirky, but she's also really fucked up. She steals his car and crashes it! Because we're two women and we're creating a female character, there was no other way for us. I can't picture doing her not in a nuanced way.

One of my favorite lines I've heard on any show ever is in the pilot, when Rebecca's mom says that her suicide attempt "inconvenienced a lot of people." Was there ever any pushback from the network about going to those really, really dark places?

No, you know, the show kind of always was what it was, especially because we made the pilot with Showtime. And Showtime has very, very dark material. So, there was never a pushback from them. And, then, the show that CW bought was this pilot, so they knew that they were getting a dark, fucked up, cable-y, different type of thing. Episode seven is really all about depression -- we always knew we wanted to do a depression episode, and they were down.

One of the big questions for a musical is: how does music function in it? The songs seem to function as commentary and are sort of both inside and outside of the story. How did you determine how you wanted the music to work?

It always depends. The music numbers are ultimately the emotional tent poles. The show is a musical because Rebecca has these heightened emotions, and obsession gives you these super, super, super heightened highs and lows of emotion. So, the key is: are we, for the most part, exploring the emotional thesis statements of the episode in the songs? And then finding the comedic premise within that. Very, very few times are we shoehorning the comedic premise in, because it just doesn't work. I really like to structure it like a musical, where it's an insight into someone's unconscious.

You've got a lot of awesome theater veterans in the cast. Obviously Santino Fontana is a big Broadway star, Donna Lynne Champlin is amazing, and Vincent has done tons of theater. What was the casting process? Did you specifically want to draw people from the theater world?

We knew in the pilot that we wanted Paula to sing, but we actually went into it pretty open. Ultimately, we wanted to cast the best actors for the roles. I remember because Greg was always kind of the voice of reason and somewhat of a straight man, we were like, "You know, if the person who's best for Greg acting-wise cannot sing a note, we'll make it work." We were always open, except for Paula, to someone not being able to sing.

We cast in New York as well as in LA for the pilot, because in the back of our heads we were like, "We want to see what else is out there." And when we did the New York auditions, the people who were the best actors for the roles were also unbelievable at singing and dancing. At the time we were auditioning, there was a musical off-Broadway called Here Lies Love, which was about Imelda Marcos. It was an all-Filipino musical, and there's nothing like that going on right now in Hollywood. When we cast Josh Chan, we had no idea if we were going to be able to find someone who could sing. We just didn't know what that talent pool was like. And then Vinny walked in and was perfect and had also been a dancer. He's a singer, but he's primarily a heavy-duty dance captain and dancer. And then Santino was by far the best person. Instantly, we were like, "Oh, that's Greg. Yep." His audition was him playing piano and singing, and I remember I was like, "Oh, okay. Yeah, I'm done. I get it: you're really talented. Cool." And same with Donna Lynne. And that's how it continues to work out with this cast. So, it was just kind of kismet, the way that we cast it.

You studied theater at Tisch. Obviously, the show is your focus at the moment, but do you have any desires or plans to go back to theater?

Oh, absolutely. Right now, the show is everything, but that would be wonderful. I actually wrote a full-length musical before we got started on this, so I have a full length-musical in my back pocket that, had this not happened, I would have been trying to take to New York or the La Jolla Playhouse. Theater is still very much my world.