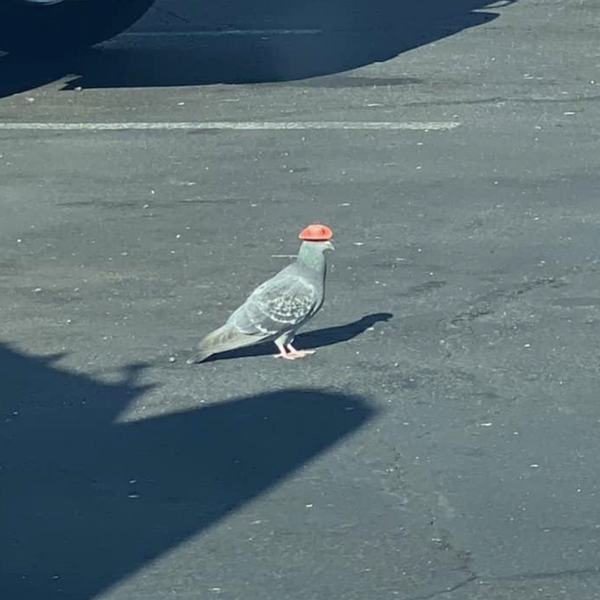 The Internet's Obsessed With These Pigeons Wearing Tiny Cowboy Hats

Just in case you need further proof that 2019 is the Year of Yeehaw, the internet is currently obsessed with a group of pigeons in Las Vegas who appear to be wearing — wait for it — miniature cowboy hats.

That's right, KVVU reports that someone has been outfitting these little guys with teeny-tiny red hats on the mean streets of Vegas — and no one knows why.

That said, while a potential motive and/or pigeon hatmaker has yet to be identified, the lack of clarity surrounding the bizarre situation hasn't stopped the internet from formulating some theories about the occurrence.

Or, you know, just making jokes. As local resident and pigeon-spotter Robert Lee told Storyful, "The rodeo is in town. That's the only explanation I have."

Someone is putting tiny cowboy hats on Vegas pigeons. There are consequences to legalizing marijuana. pic.twitter.com/CdK06gauYQ

The pigeons have become hyper intelligent and are making the hats for themselves. https://t.co/FIbAjLDRKQ

Nobody... and I mean NOBODY can convince me its not Kacey Musgraves putting these hats on pigeons pic.twitter.com/uq91dJcelF

However, the cowboy pigeons have also begun to stir up some concern amongst animal rights and rescue groups — including a local "pigeon positive movement" known as Lofty Hopes, who have set up a cowboy pigeon hotline.

"At first, I was like, oh my God that's cute! Then, I was like, wait a minute — how did they get those hats on there," Lofty Hopes' Mariah Hillman told KVVU. "Did they glue them? And what does that mean for them? Is it something that's going to impede their flight or attract predators?"

Hi, whoever is glueing tiny cowboy hats to feral pigeons needs to stop it. Adopt a pigeon and put a tiny hat on him that can be removed for cute pictures if you so desire. Stop bothering the wild boys. Yeehaw. pic.twitter.com/yGGgLVxDLV

Granted, if the tweets are any indication, their concerns haven't tempered the internet's obsession with these pigeons in the very slightest. So while we may never know who's behind the hats, at least you can check out the commentary, below.

Someone has been putting tiny cowboy hats on pigeons in Las Vegas. Las Vegas Animal Control confirmed that the new leading cause of death in pigeons is saloon shootouts. https://t.co/6K9rWplU68