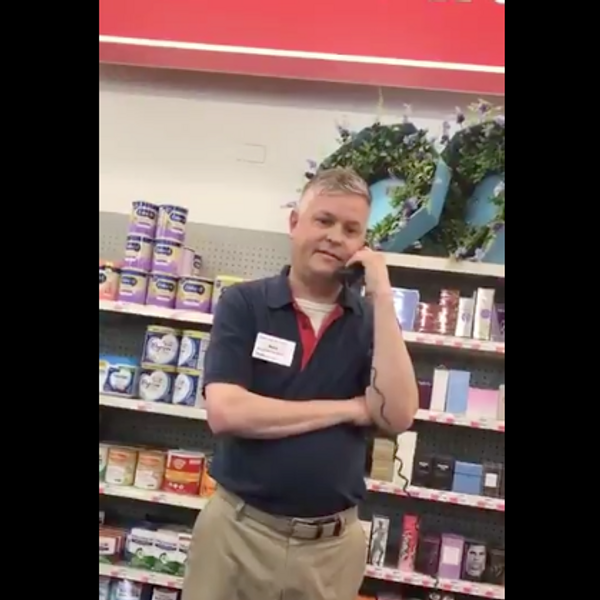 White people have the audacity to call the police on black people for doing things like sitting at a Starbucks, selling water, napping, and canvassing their own districts. In the most recent instance of unchecked racism, Morry Matson, a white CVS employee, called the police because a woman tried to used a coupon he claimed was fake.

In a since-deleted Facebook post, the woman, Camilla Hudson, wrote, "I stopped in to make a purchase using a coupon mailed to me by the product manufacturer, as replacement for problematic/ defective product. The manager on duty said that he'd never seen a coupon like the one I had and said that he thought it was fraudulent. When I asked for his name and his title/role within the store, he became agitated and rude. When I pulled out my phone to document what happened and exactly what he'd said to me (AND how he'd said it!) he turned his back and walked away from me. When I followed him and demanded that he answer my question, he ran to the back of the story and slammed a door in my face."

Hudson recorded a video of Matson calling the police and telling them her name. He refers to her as African-American, at which point she corrects him, saying, "Black. No, I'm not African-American, I'm Black. Black isn't a bad word."

Not only is Matson completely out of line for calling the police on an innocent person, but he is also a hypocrite. In 2016, he led a campaign to extend a path from Edgewater to Rogers Park. The issue was on the ballot but was removed after it came to light that Matson forged five pages (out of a total 13 pages) worth of signatures on the petition urging for the vote.

Matson is running for Chicago City Council and also claimed he was a delegate for Trump's 2016 campaign, though Block Club Chicago reports, "an official list of Illinois Trump delegates does not include his name."

CVS has apologized to Hudson, writing in a statement to Block Club Chicago:

"We sincerely apologize to Ms. Hudson for her experience in one of our stores. Our Region Director in Chicago contacted Ms. Hudson as soon as we were made aware of this incident. CVS has begun an investigation and we will take any corrective action that is warranted to prevent it from happening again. CVS Pharmacy does not tolerate any practices that discriminate against any customer and we are committed to maintaining a welcoming and diverse environment in our stores. We have firm non-discrimination policies in place to help ensure that all customers are treated with respect and dignity. Profiling or any other type of discriminatory behavior is strictly prohibited."