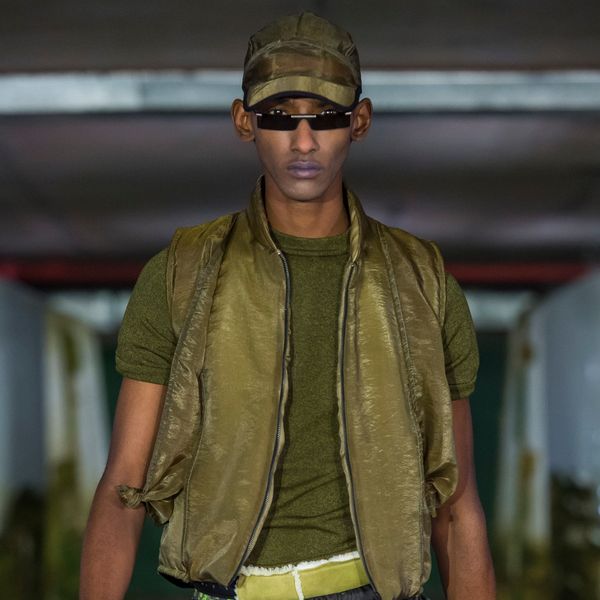 London menswear brand Cottweiler debuted their fall 2019 show under a dimly-lit east side garage, with the theme "the lost art of cruising." The immersive world of the show was designed to replicate a private public space where people find others to bang, but taken even more literally, with moss-covered urinals lining the runway's edges and a fenced border recalling the shadowy sections of public parks.

Cruising, for a brief history lesson, is a term that became popular in the mid-seventies and early-eighties, used to describe the explicitly gay activity of men seeking sexual chance encounters in public. The carnal nature of this most natural pre-Grindr activity has since died down in popularity at the advent of, well, Grindr.

So to preserve cruising's lost art, Cottweiler's collection cleverly featured clothes in earthy tones and styles reminiscent of the era it evokes: shades of green, black, and midnight blue are mixed with bold, arty, and very gay prints. To really riff on the theme, there are eighties gay daddy/club kid staples like high-waisted acid-wash jeans, jumpsuits, silk shirting, sporty hats and trousers, and chunky athletic footwear.

And, of course, the men modeling the clothes are the sort of good-looking men one would hope to see on their own cruising adventures, were that still a thing. At the risk of dating myself, because I've sworn off those horrid apps where #masc4masc gays spew their self-hate onto each other in the name of casual sex, I can affirm that cruising actually is still a thing. But trigger warning if you're triggered: whether you're gettin' it in online or IRL, be safe!

That said, because I enjoy a bit of a thrill, I have had plenty of my own (mis)adventures in parks, adult bookstores, steam rooms, and more — and I know I'm hardly alone. So Cottweiler's latest collection, both a history lesson and applicable for life today, is perfect for when I feel ready to be chic and low-key in the streets, and also a freak in public.