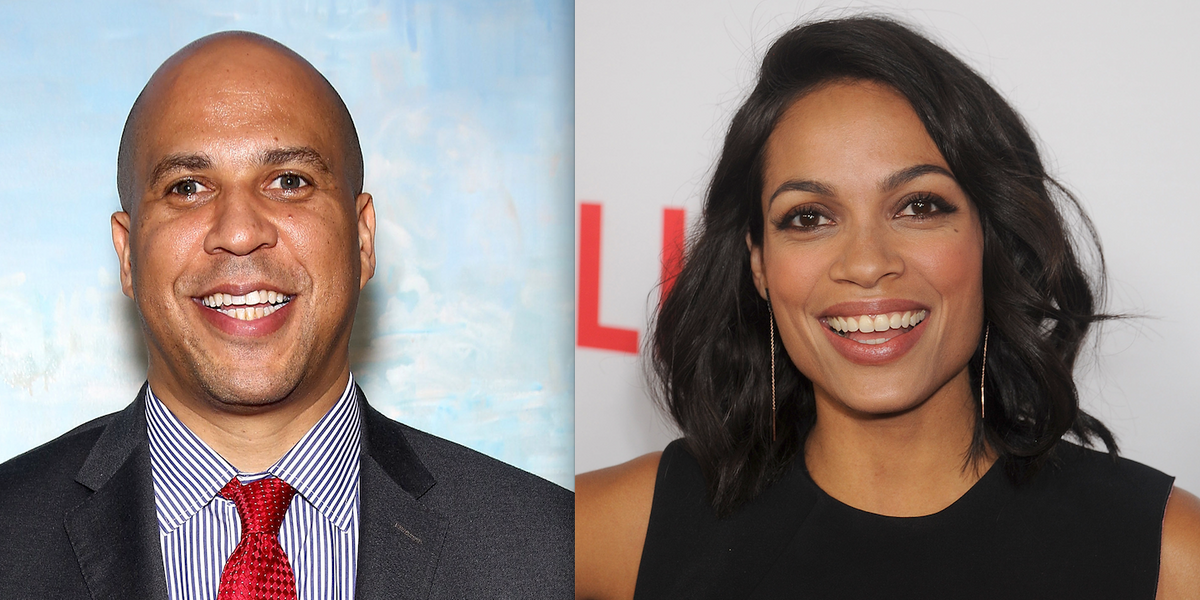 Rosario Dawson and Cory Booker Are Officially an Item

Rosario Dawson and baggy-jeans pioneer Cory Booker are officially the hippest couple on the campaign trail! They were previously spotted together at a performance of Dear Evan Hanson, but TMZ spoke with Dawson at Washington D.C's Reagan airport, where she confirmed that she is the "boo" the 2020 hopeful referred to recently on The Breakfast Club.

"Yeah... Yes, very much so,” she said when asked if the pair were in a relationship. "So far, so wonderful, he's a wonderful human being. It's good to spend some time together when we can. We're busy."

Although she was a Bernie supporter in 2016, Dawson has officially endorsed her new boyfriend. She showed off a Booker 2020 button at the airport, and heaped praise on him to TMZ: "I am just grateful to be with someone that I respect and love and admire so much who is so brilliant and kind and caring and loving."

Even if they're not sure about Booker 2020, people seem pretty here for Rosario for First Lady (though she told TMZ she "has no idea" about marriage). As far as celebrities in politics go, Dawson has a lot to offer on the campaign trail. She was extremely vocal during the 2016 election and campaigned actively for Bernie: appearing in campaign ads, introduced him at events, and once even penning a letter questioning activist Dolores Huerta's support of Hillary Clinton. She's also the co-founder of nonprofit advocacy group Voto Latino, which has launched a multi-million dollar effort to increase Hispanic voter turnout, and helped organize the celebrity-studded family separation protests that took place at the border last year.

Personally, my biggest question is how will the other 2020 candidates try to keep up with Booker on the cool celebrity affiliations front? Boringly, most of his rivals are married to longtime non-famous spouses, and thus, are unlikely to announce celebrity significant others. But Warren or Harris can always get papped attending a performance of Hamilton with Rihanna. Based on 2016 and the recent midterms' onslaught of political endorsements by celebrities, which even brought Beyoncé and the notoriously apolitical Taylor Swiftout into the fray, it's only a matter of time until more candidates and celebrities begin courting each other.