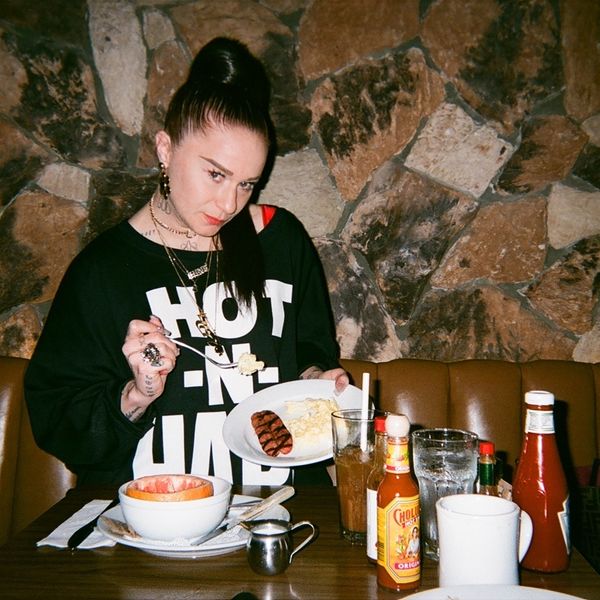 Popularity is relative, and especially in the digital age. You could have hundreds of thousands of followers online, but be completely unknown in the streets — massively famous on Instagram, YouTube or Twitter, but lack any kind of real, authentic cool in person. For our new series, Coolest Person in the Room, New York-based photographer Megan Walschlager pinpoints all the people whose energy is contagious regardless of their following count or celebrity. Meet Sarah Hudson: the LA-based songwriter to the stars, musical artist, spiritual guru, and soon-to-be podcaster and DJ.

My day job is being fierce... and I'm also a songwriter.

I came from a super musical family. My dad is a producer/writer and my mom is a dancer. It was in my DNA. Right after high school I was like, "I'm going to be a pop star." And then I got a record deal, I made the whole crazy record for millions of dollars and all that bullshit. I ended up getting dropped right before my record came out, which was literally so devastating. At the time it felt like that was it and my life was over. And I was like, "Fuck the industry, fuck this shit!" And I started a band with my now husband. I lived in NYC for 5 years and that's where we started this underground electro-pop, very MySpace era band called Ultraviolet Sound. We just did it from scratch and toured. It was gnarly times but it was really fun and liberating. After 5 years, we put the band to bed and he started his own DJ/producer project and it immediately took off and was really successful.

Meanwhile, I was like, "Well what the fuck am I gonna do?" I met a ton of other artists through being in my band and I would just ask if I could write with them — like full hustle mode — and I ended up meeting this artist named Ferras and we wrote a ton of shit together. He was really good friends with Katy Perry, and then she loved the shit we were doing.

This is really such a long story short, but essentially one night she texted me like, "Hey, wanna come to Santa Barbara and write with me, Dr. Luke, Cirkut and Max Martin?" And I was like, "Um duh!" So I went there and that night we wrote "Dark Horse." I was filing for bankruptcy at the time, living in a studio with no shower, cockroaches — like it was fucking low-times. I remember driving home from that session like I hope this just does something. And it literally changed my entire life.

That's so crazy! I mean, that song broke tons of records right?

Yeah, it's 11x platinum, which is so crazy. And it's diamond certified which is so fierce!

That's so major. Also, you were on the LA party scene in like the early 2000s with Paris Hilton and that whole crew right? What was that like?

Well, I went to high school with Kim Kardashian.

So that set the tone.

Exactly. It was the height of Paris Hilton, Britney, Lindsay Lohan party scene. The Simple Life was killing it! TMZ was starting and-

Peak! Like Juicy sweat suits and tiny dogs and the whole thing. It was a crazy time. It was really when everything sort of started — like social media and reality TV — so it was really just over-exposure, excess, intense. Now I feel like it's almost desensitized now. Like you can see what anybody's doing at any single moment and people just don't care anymore. But then, if you caught someone doing something, it was like a massive deal. But yeah, I was definitely on that party train very early. Like in high school I was using a fake ID to go to all the gay clubs. I was a WeHo rat hag, for sure.

There's kind of this discussion in NYC right now about nightlife, like there's not enough excitement or secrets anymore. Some parties are starting to do phone free.

Nobody's shocked any more. Nothing's a story anymore. It's kind of boring.

What kind of music do you DJ?

Well, house is my love. BUT all kinds of shit. House, pop, Madonna. Basically anything fierce.

You have also been on a few episodes of Keeping Up with the Kardashians? What was that like?

Well, like, I said we went to high school together and I have to say Kim's always been fucking stunning and so sweet. Being on the show was crazy, they do a really good job of staying out of your way and letting you live your life. It's really like the cameras aren't even there. We went to our high school reunion together. It was cool because in high school we did a talent show act as the Spice Girls and that was kind of like our friend group. Then 20 years later, Kim actually found the video of the talent show — which I had never seen. Then we recreated the pose we were doing in the video. We also all flew to Vegas together to see Cher which was iconic beyond.

Kim Kardashian West on Instagram: “I'm so Thankful that me & my friends were the Spice Girls for our high school talent show! The Spice Girls got me through a lot!…”

What are your thoughts on social media? I feel like people who thrive in a club environment also have success on the internet because it's sort of this underworld for people to connect.

It's true that all the freaks come out at night. I've met so many friends and makeup artists and singers and hairstylists, who I've worked with at the club and on Instagram. I'm addicted to social media like everyone else. Sometimes I find myself going to Instagram or whatever and I realize I was just there and then I feel annoyed, but other than that I just fucking love it. I think it's amazing. I follow things and people I love so that helps a lot. And I've met so many of my friends on the Internet. Like my friend Ferras — we met on MySpace. When I was in a band, literally everyone I met was through MySpace and Facebook — hairstylists, makeup artists, all of it! It changed my life. And now with Instagram — one of my idols since I was little is Andrew Dice Clay. He's like a megatron star comedian and he's, like, truly my idol. But I met him through Instagram and now we're like best friends. In fact, this is his shirt. The internet is amazing I love it. Even if it's just discovering new music. I love it.

Do you have a specific getting ready routine for a night out?

I definitely have to set the mood of my bathroom and I shower only with a candle on. Like no lights. I can't have any lights. I hate it. Then I just take a shower and snatch my hair up so tight — like it is right now — so my face is snatched to the heavens. And then it's just all about my eyebrows. I just paint them for the actual gods. And listen to Madonna or Gaga, usually.

Whisky on the rocks, baby.

Really? I usually do tequila only.

I've definitely had a lot of phases, but with tequila I will literally be naked, rolling around with like a ketchup bottle in my asshole. You really just do not want me to drink tequila.

Have you ever been to The Box in NYC? Because that sounds like a very Box-esque performance.

Yes! Exactly. Give me tequila and I'll be performing at The Box.

What song, when it comes on at the club, makes you lose your mind?

I know I can't stop talking about Madonna, but literally any Madonna song from Confessions on a Dancefloor and back. Anything after that album... My wig like shakes a little bit, but it doesn't fly off. But from that album on back, I'm dead. I would say "Vogue" for sure.

Where's your favorite spot to be at the club?

My club aesthetic is very much so sitting in a booth on the top of the seat. I sit there for a long while. Have a drink. Assess. And depending on the music — if it's just too good to be true — I'm dancing. But if it's not good, I stay in that same place all night. I don't go around. I let them come to me. I'm just observing, living my own life, or on the dancefloor.

What are your favorite places to go in LA?

Evita is hot. And it sounds cheesy but anywhere in WeHo is for me. Like anywhere with gorgeous queens in speedos twerking is where I want to be.

"Anywhere with gorgeous queens in speedos twerking is where I want to be."

I feel like you are also known for your personal style. Where do you draw your inspiration for that? It's so opposite of the minimalist aesthetic that is so popular now.

I just love color and anything over the top. Like a full drag queen aesthetic. When I walk in a room I want people to be like, "She's definitely fierce." I don't know, I've idolized people who are a little larger than life. I like to be a little flashy, trashy and kookoo. I just grew up with a "wear your art on your body" sort of mentality. But it's interesting because in my house, I like my environment to be more organized and minimal.

Besides Mother Mary and more glamorous songs, I just finally feel ready to be my full authentic self. I want to make people laugh and smile and invite everyone to be a part of my world. I feel like 2019 is that year. Eventually I want to do a one-woman show where I sing and tell stories, but I also want to DJ and explore that world. I'm not sure in what form this will all take, but I feel ready in my life now to just go for it all. I am also launching a podcast called Right to the Source about the bridge between creativity and spirituality with a fellow songwriter, Evan Bogart. And I'm just focusing on being grateful and of course, fierce AF.