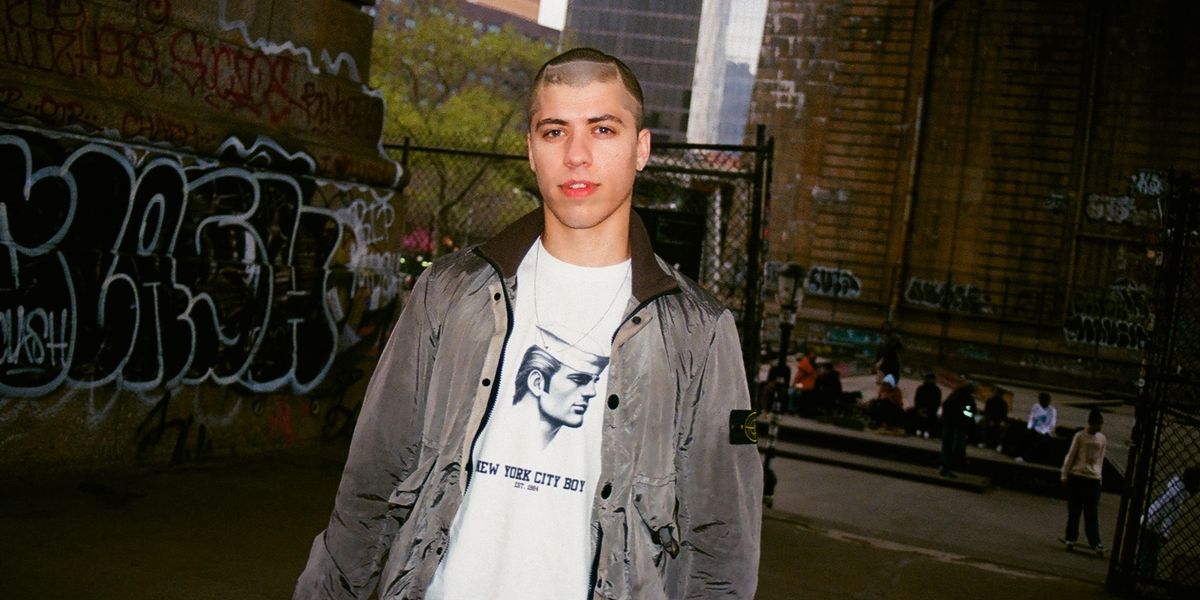 Popularity is relative, and especially in the digital age. You could have hundreds of thousands of followers online, but be completely unknown in the streets — massively famous on Instagram, YouTube or Twitter, but lack any kind of real, authentic cool in person. For our new series, Coolest Person in the Room, New York-based photographer Megan Walschlager pinpoints all the people whose energy is contagious regardless of their following count or celebrity. Meet Jonah Rollins (@jonahalmost), the NYC-bred, truffle-loving, skateboarding, model, DJ and hypebeast you need to know.

I do production at Supreme.

I studied production management at FIT, and I got into that because I took a product development class that I really liked.

Was that your knitting class?

No. I had to make this little dinky collection and cost it out and do all the behind the scenes stuff for it. But basically my professor told me that production was the least glamorous part of the fashion industry and I feel like I took that as a challenge to glam that shit up.

So since you work at Supreme are you a big skateboarder?

I feel like I used to be a huge skater when I was like 15. But as I've gotten older, I'm just sick of getting hurt. Now I'm like a sideline skater. Like I watch the videos, I read the blogs-

I'm still a fan, but now I'm just riding around and keepin' it low-key.

You like ride your skateboard to work and stuff, right?

Yeah, everyday! But you will not catch me, like, jumping downstairs or handrails or any of that shit anymore.

"I always tell people nightlife is the root of everything."

I also know you're super involved in nightlife — you DJ sometimes and you're a big raver, right?

Yeah, for sure. I'm just gonna be real about that. I think nightlife is just so important in New York. I always tell people nightlife is the root of everything. If you are a fashion student, you can go out and you can meet fashion designers — you can meet anybody. That's how I made all of my friends basically: through going out. That's how I even linked with the people that got me my job in a way. It's one of those things that if you want it, it's out there. You just have to hit the club and meet the people that you want to meet.

And then as far as raving goes-

Don't even get me started!

Right, don't even get be started [Laughs]. I went to Berghain when I was like 18 and it just like changed my life as corny as it sounds. I had never heard techno music or anything like that before. And then if your first exposure is something that intense, then it really reshapes... well, it reshaped my interest in fashion and music and all different kinds of stuff. So that's kind of where my interest in that started.

You grew up in Texas?

Yeah, so I'm actually from New York, but I grew up in Texas. I moved there when I was like 11. And then I moved back to New York when I was like 17 after I graduated. But Texas is like a weird trap. It's one of those places that if you don't leave you can get sucked up into this weird — I don't know how to explain it, but I was glad to leave for sure. It was not for me.

Totally. I'm from rural Indiana and I remember being in high school and looking at New York nightlife and being so enamored.

Exactly. And you know what it was? I saw that movie Party Monster when I was like 16. As fucked up as that is-

Same! And that's not supposed to be a glamorous movie!

It's really not! But I was like, "Damn, this is so cool. I wanna go out and dress up and feel the fantasy!" And that's why I love nightlife - because you can really get your life out here and live the fantasy! It's just cool to move to a city and be the person you dreamed of being when you were a little teenager in bumfuck wherever. And this was kind of that year where I feel like I fully realized that in a way. It's been good for me.

"Dye your hair. Wear the crazy clothes. Go to all the parties. Don't sleep. This is it."

Yeah, you've had a lot going on. You've started modeling a little bit, DJing — what are your other projects?

So, I really want to keep DJing and DJ more. Right now it's just fun. The thing with all of this stuff and art and creative endeavors in New York is — I feel like when there's so many other people doing shit, I feel like you can put a lot of pressure on yourself to make something happen. Especially if you're trying to make a living out of it or whatever. So my goal is just to have fun with all the creative projects I wanna do.

Like I'm trying to release this t-shirt line, I wanna DJ more parties — but I don't want to put pressure on myself to make it happen in a way that affects how I feel about it or the quality of the product, if you will. It's one of those things where I'm taking it day by day and as I have ideas, and as things come up, then I'm down to do them. And as far as modeling goes, if the check clears, I'll throw whatever on. It's New York, it's a hustle. At the end of the day we're all trying to eat, so...

Tea! What is your go-to drink for a night out?

Are you gonna say a mezcalita?

I forgot your other passion is charcuterie, truffles and, like, bougie eating.

Yes, this just goes back to living the fantasy. I just realized these things don't have to be exclusive to certain kinds of people. Like I can be my bummy, skater, raver self and also buy a truffle on the weekend and make some pasta with it. So, that was me just kind of being like, "Let me live this fantasy. I'm gonna spend $40 on a truffle and go all the way out with it." Whether it's like truffles, charcuterie — I just bought my first charcuterie board. This sounds so corny, but I'm just trying to use my inspirations to find new ways to plate charcuterie in a radical way.

Right, didn't you make one inspired by spiraling.

Yes. I made one that was inspired by the sequence of events of a night going out to the rave. There's the pre-ki, the rave itself and then the afters spiral. So the plating was spiral-inspired. It's just fun and being ridiculous and living the fantasy. We really only have one life to live, so I wanna eat as much truffle, fine meat and cheeses as I can and go to all the raves, model all the clothes. If you're not living life to the fullest, what are you doing?

What song leaves you wigless when you hear it out?

Yeah, that song goes hard, I can't even front.

"We really only have one life to live, so I wanna eat as much truffle, fine meat and cheeses as I can and go to all the raves, model all the clothes."

Do you have any getting ready routines or pre-game rituals?

I really like taking a long, steamy shower. And just making sure the skin is on fleek as much as it can be. I also get the music goin'. You have to set the atmosphere before you go out so you're in the mood already. The fantasy doesn't start when you go out, the fantasy starts at home from within. You have to get into it.

Is that a bar or a party?

It's a club that's been there since the '70s and it's still run by the guy who started it, so it just has this really classic New York feel. But he's down with people throwing raves and parties in there, so it's one of those things where the architecture and the vibe are just totally New York, so that's always cool.

Also, I'm a sucker for a rooftop, so anytime I can see the skyline or feel that downtown fantasy, then I'm there for that.

I love. Do you have any parting words?

I guess just reiterating that this is it. On some real shit: YOLO. I've really been internalizing all that end of world shit that you see on the news every day — like "Global Warming! We only have 40 years of inhabitable life left on this earth!" and shit like that, so I just was like. "Fuck, this is it. I have to go in. I just turned 23 and I've been in New York for 6 years and I can really see time passing by. You're only young once. Dye your hair. Wear the crazy clothes. Go to all the parties. Don't sleep. This is it.