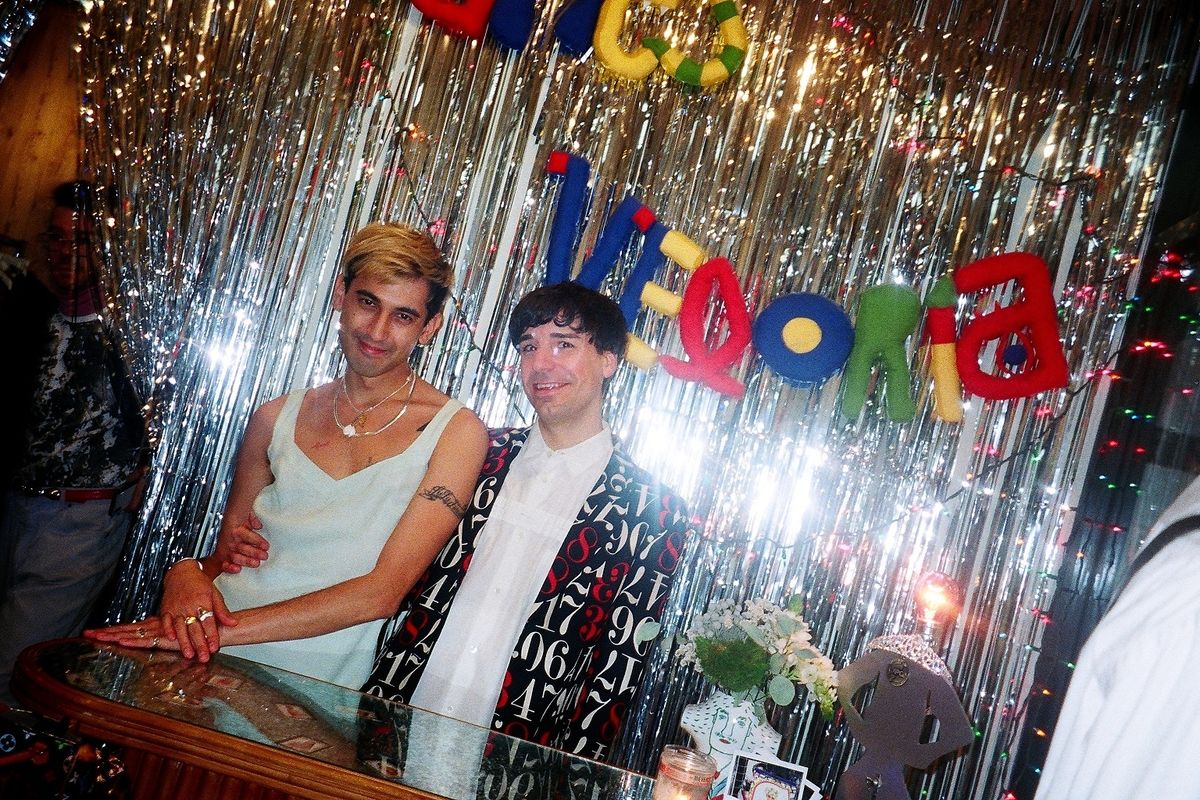 Popularity is relative, and especially in the digital age. You could have hundreds of thousands of followers online, but be completely unknown in the streets — massively famous on Instagram, YouTube or Twitter, but lack any kind of real, authentic cool in person. For our new series, Coolest Person in the Room, New York-based photographer Megan Walschlager pinpoints all the people whose energy is contagious regardless of their following count or celebrity. Meet Colin James Weber and Brandon Veloria Giordano — owners of NYC's best kept secret: James Veloria. Tucked away in a Chinatown mall, this vintage store and archival fashion destination has everything from Galliano and Gaultier to Tom Ford-era Gucci (and at prices you won't believe).

What are your roles at the store?

CW: We both source. That's the fun part for both of us, for sure.

BG: We don't get to source as much as we used to because the store has been busier, but we definitely make time to do it.

CW: Brandon is also the one in the store more with the customers, hanging out, modeling, trying on all the clothes and getting people excited about them on Instagram. And I'm more behind the scenes doing inventory, accounting — all the boring stuff.

BG: He's so good at it though.

What were you doing before the store?

BG: We met in Oakland and have been in a relationship — we're like in love, you know? Then I moved here and he followed me here because he's obsessed with me.

BG: But when we moved in together our closets were insane. I was working for someone horrible. I was doing production for a designer and I fucking hated it. And they told me that I'd end up selling old clothes in a dusty parking lot somewhere for the rest of my life and that I'd regret quitting my job.

CW: They wouldn't let him quit.

BG: So, look at me now! I'm selling Galliano under a bridge!

Even better! What about you, Colin?

CW: I was a librarian in San Francisco Berkley, and it was alright but it was a little dull. I love being around literature and film and all that stuff, but it just wasn't enough to help other people find their stuff — although that's kind of what we do now.

CW: We source and we do research and find out which collection things are from and study the history of fashion. But we've both been thrift shopping obsessed since we were kids and love hunting for things.

So how did all this lead to the store?

CW: When we moved in we both had pretty substantial wardrobes of our own and when those combined it was like, "This is a store."

BG: And we would rent our stuff.

CW: Yeah, our friends who were stylists would rent from us.

CW: And we sold stuff on eBay kind of as a hobby for a minute. Also, when I moved here — for some reason librarians don't make any money in New York compared to the Bay Area, like $20k less a year. And I was like, "I don't think I can do that, so let's figure something else out. " And this just happened really naturally.

BG: Yeah, it still kind of feels like a hobby, but we live off of it.

CW: Yeah, we never had like a business plan, or...

BG: We should probably have a business plan, honestly.

BG: Well, we're working on that.

"Look at me now! I'm selling Galliano under a bridge!"

How did you two meet?

Is this a real story?

BG: It's real! And then he tried to go home with me and pretended his bike tire went flat.

CW: It really did.

BG: Then he slept on the couch and we help and hands and that's how we met!

We'll you guys have been doing pretty well, you recently opened up your second room JV Retreat. How did that come about?

BG: Honestly, it was another stupid thing where we were collecting so much and the business is growing and doing so well.

CW: We also had so much stuff that wasn't in the store that people couldn't even see because it was in our apartment. So we were bringing people to our apartment to shop, which feels a little invasive after awhile.

CW: And the space next door opened up.

BG: Even with just this room, it was very much a community space. So many fun, queer people in general would just come to hang out and we wanted more room for that — which is why we kind of turned it into a sexy '70s living room.

CW: It's cozy, there's seating, you can settle in in there now.

I noticed most of your pieces are from the '90s and early 2000s. What do you love about that era?

BG: I think people just started having more fun with fashion, and I think that has to do with club culture as well. Like people wanted to go out and...

CW: Put on a look that was really amazing and fierce. And there was a lot of playing with gender, which has always been a big part of what we love about fashion too.

Right, you guys don't sell a ton of basics.

CW: Yeah, even if we have a white shirt it's going to have some fun detail. There's enough basic stuff in the world, we don't feel like we need to put any more out there. So we like to find the interesting and unique things.

For example the mannequin-

CW: She sells stuff right off her body, too.

Do you guys have a getting ready routine on nights when you want to go out?

BG: I will sit in front of my vanity for awhile, put my face on, listen to dance music. Usually I'll have my friends over. Getting ready is so much more fun honestly.

CW: Yeah, sometimes that takes up half the night. And then we'll maybe pop over somewhere for an hour or two.

BG: Yeah, you always feel great. You look amazing. You're kiki-ing with your friends.

It's sometimes more fun than actually going out.

BG: Right? Because once you get there your girlfriends are like, "Oh my god that guy is so hot." Then they're like running off with somebody and you don't even really hang out with them. So getting ready is always the best time to chill, talk shit, get cute, you know?

Do you have a go to drink at the club?

CW: Tequila soda. Something clear. I don't want to spill on the clothes if we're wearing them out.

What's your current favorite song to hear out?

BG: I was in Iceland last weekend which is really random, and they were playing all of this Icelandic pop music which is okay, and then they played a Robyn song and I was like, "Ughhhhhh!!! Yes!!!" And it just felt really good, you know? It was either like Icelandic pop or ABBA everywhere. No shade to Iceland.

Where are cool places you like to go in NYC?

CW: We really don't leave this store. We moved three blocks away and we really do keep a 5 block radius around here.

BG: I mean, Mood Ring in Brooklyn is really fun and queer. It's really close to Bossa Nova — that whole strip is a little moment. And Chinatown.

BG: Dimes square is out though because we're trying to branch out.

CW: Yeah, we go to like three restaurants on that block.

CW: Which is great, but we are just there every other day.

BG: That's how we got our Opening Ceremony pop-up actually — at Kiki's. I ran into Humberto [Leon] there.

CW: It really is kind of a downtown spot you run into everyone.

What makes a good party?

CW: You can know no one at a party and still have an amazing time if everyone is having a good time and no one is standing around judging people.

BG: Right. You can literally be a troll and just do your thing and feel amazing. I just don't like being somewhere and feeling like none of these people deserve to have me in the room with them.

BG: Yes! That stank ass energy! They're side-eyeing you because you're looking great and you have a look on and you're that bitch and they're just like...

CW: Yeah, that always kills it.

BG: It kills it! Leave your stank ass friends at home, you know what I mean? That bitch that's always complaining — leave her at home! Make her like a brunch/coffee friend.

"There's enough basic stuff in the world, we don't feel like we need to put any more out there."

What's next for James Veloria?

BG: We're going to be doing another special designer collection for spring — it's top secret. But it's going to launch in April and we're going to completely redo JV Retreat to reflect the designer that we are doing.

CW: We're also pulling together a collection for Phluid Project, which we're excited about.

BG: We're actually having a party at Mood Ring tonight. We're all about community and highlighting all of our friends and what they are doing, so we thought this would be a great opportunity to do that.

CW: And give people a good excuse to dress up.

BG: Yeah, we wanted to hear our DJ friends sets, have our drag queen friends perform and put on their looks, and just really celebrate everyone who has helped us grow as a business too.

CW: One of the downsides of being in a mall is that it closes at 9 PM, so we can't really do anything at night here.

BG: Yeah, we've never really had a crazy party for the store.

CW: So, hopefully people come here, get their looks for the party, then head over there.