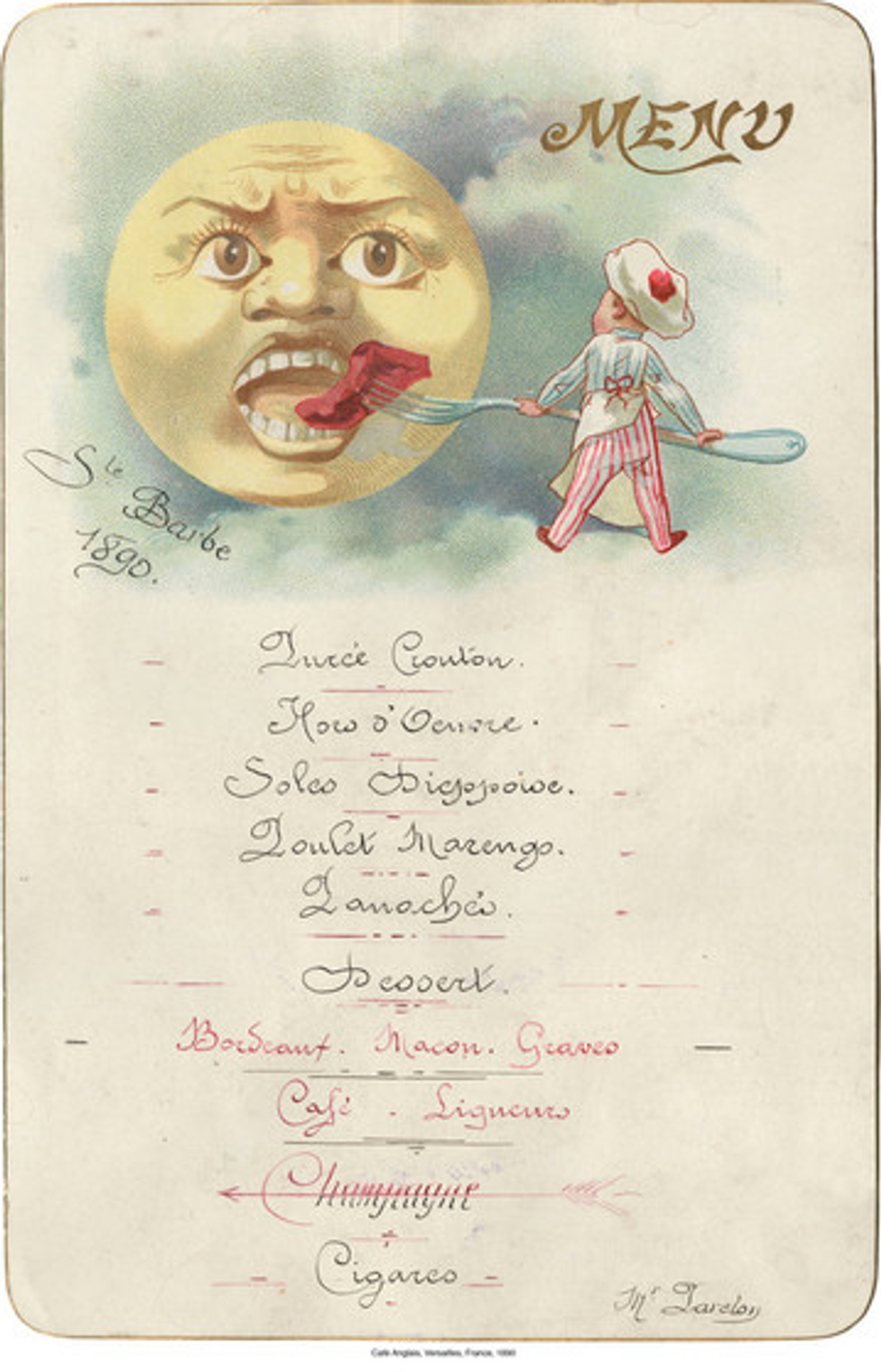 Nostalgics who appreciate the art of dining won't be able to resist the just-launched Cool Culinaria, a collection of vintage restaurant ephemera. Pillows, aprons and tees sport throwback images, logos and menuisms, such as 'Please Don't Ask for Credit,' while the fine prints feature bygone menus ranging from London's Claridge's Hotel in 1898 to the Hollywood Brown Derby in 1948.

The project was instinctual for co-founder Charles Baum, a former restaurateur whose fondness for culinary history is in his blood: his father was Joe Baum, the P.T. Barnum of iconic New York restaurants from the Four Seasons to Windows on the World to the Rainbow Room. With partner Barbara McMahon, an avid menu collector, Baum's vast inventory encompasses 100 years of dining history, including 18th century Paris and Prohibition New York City. Baum sat down to talk the good old days of dining.

I understand you had your first oyster with James Beard.

I did. I was about 10 or 11 years old. Jim and my father were great pals and they had begun working together and my father had invited me to lunch with him. So I was tagging along at the Forum of the Twelve Caesars. The restaurant was known for its over-sized and dramatic presentations, and they ordered what appeared to me as a table-sized platter of oysters. I asked, "Am I supposed to put this entire thing in my mouth at once?" And they were slurping away, so I did it. If the truth be known, I have to admit that I could only get half that oyster down. But I love oysters now.

What other memories do you have of James Beard?

He was in the house a lot. He was present for the very first food fight in my parents'
house. I was probably about 18 years old. Beard was there, and my grandfather was
there -- it might have been his birthday. Everyone was sitting around the table all
polite, and suddenly my father launched a piece of black forest cake across the table.
A chunk glanced off my grandfather's forehead and hit Beard. After that it was just a
free-for-all.

What reason did your father have for starting this food fight?

What is your favorite piece in the Cool Culinaria collection?

There is a menu from a place called McDonnell's Drive-In on the site from 1940s Los Angeles. It is a representation of a certain time in this country, when the automobile culture was blossoming, and you could drive up with your date in your cool car, and someone would come take your order, and you would eat a meal for about 35 cents and impress your date. The menu says, "Good food is good health," and there are these drawn figures of the servers in
terrific outfits of the day -- the guy looks like a bellhop, actually, kind of cartoonish. It
represents a happy time of "Let me serve you." 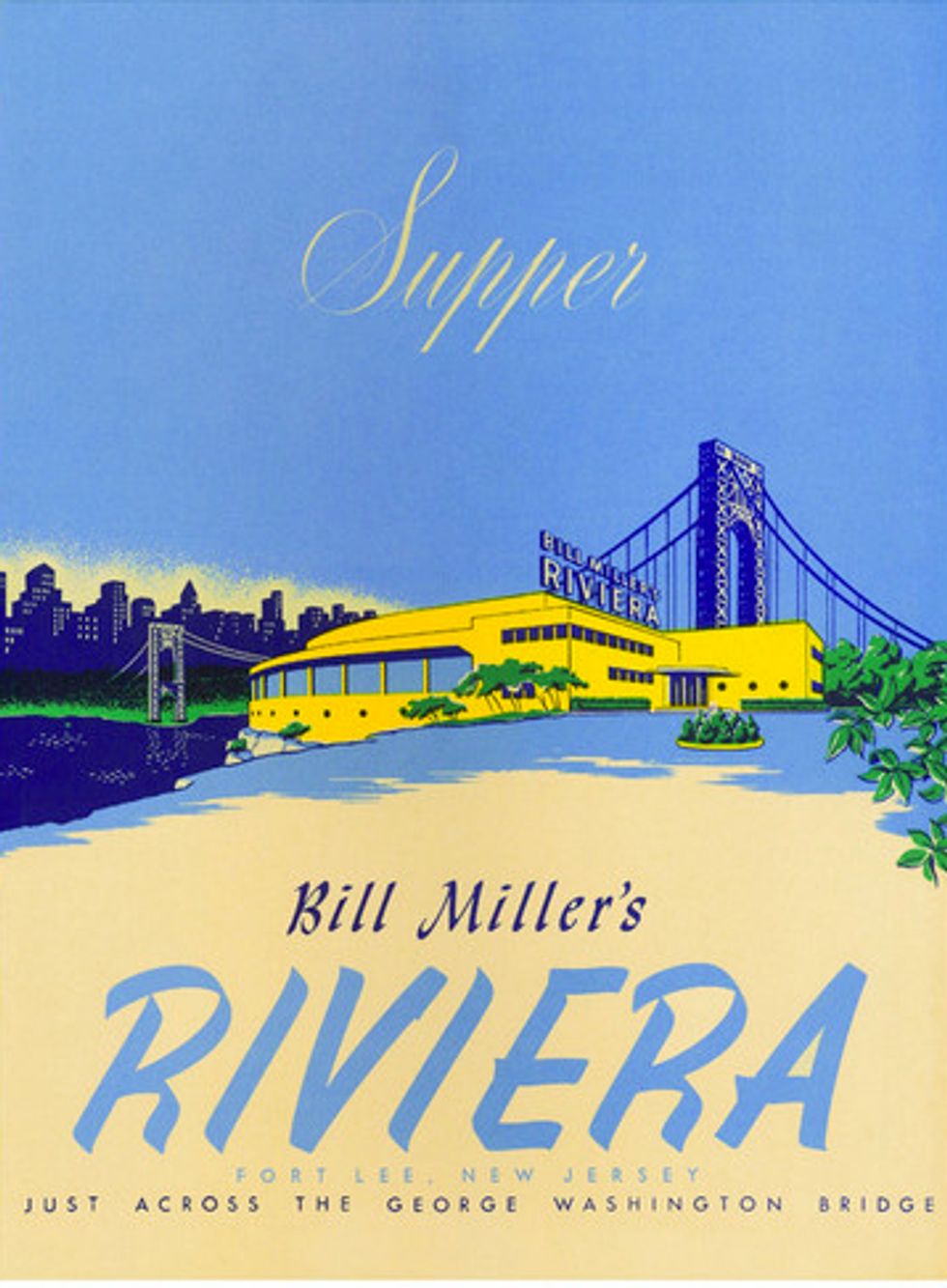 If you could bring a restaurant from the Cool Culinaria collection back to life,
which one would it be?

I have a couple. One of my favorites is in our special edition section -- it's called
Bill Miller's Riviera, and it's a nightclub in Fort Lee, New Jersey. The Riviera is
the Hudson River and it's got great graphics of the NYC skyline and the George
Washington Bridge. It's from the 1940s, a period where the impact of nightclub life
in New York was so strong that it crossed boundaries. That might be a little bit of my
Rainbow Room blood, no doubt. Another is one called the Oyster Loaf, which I think
represents the fun of Cool Culinaria -- the menu has a mermaid surfing on the back
of a lobster. And there's one called Rio Cabana, from the Concord Hotel, which was
a kosher hotel in the Catskills. There's a woman you could fall in love with on the
cover of the menu -- like one could with a movie poster of the 1930s or 40s -- a highly
unlikely way to sell food at a kosher resort.

What is your wish for the future of the Rainbow Room, which has been in
limbo due to lawsuits, and whose landmark status will be determined next
month?

In my heart, what I really hope will happen is that there will be some fantastic
restoration, physically and in spirit, with an opportunity and availability for all of us
to go back and smile the second we step off the elevator.

What do you think is really going to happen?

I literally don't know. Those that do have the opportunity to bring Rainbow back
have to figure out that it's the place that is important, and they will have to resolve all the other challenges that apparently have blocked its life.