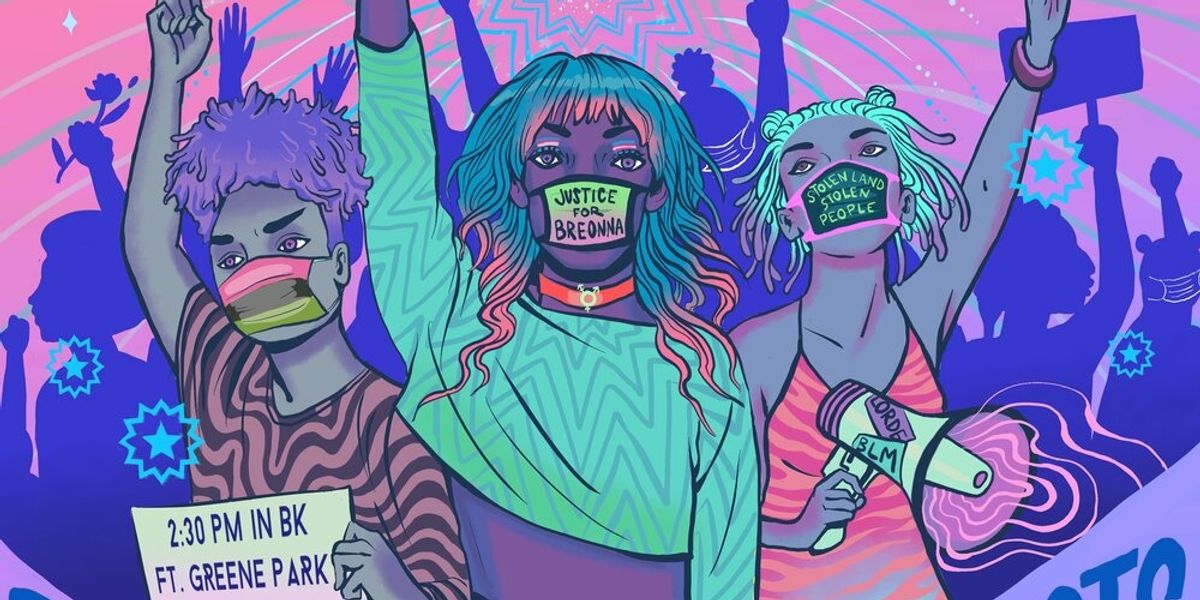 Despite being a holiday supposedly celebrating freedom and justice, the Fourth of July is a day that's instead come to symbolize hypocrisy to many. And this year, in light of continued protests, it feels all the more important to speak up against the racial inequities built into the very foundation of our country — and if you're in NYC, you can do this by joining the Confronting July 4th protest march and rally.

Organized by a group of lesbian and queer activists known as the Coalition to Honor Black and Indigenous Activists, the march is set to begin this Saturday at 3 p.m. Starting at Fort Greene Park at Willoughby Avenue and ending at Prospect Park's 15th Street entrance, there will also be DJs, speakers, and performers during the rally portion.

But aside for just joining the march, if you can, Confronting July 4th is also currently looking for people to help facilitate the event itself.

Wheelchairs available for both the march and rally!! Fill out the farm if you need on! Please come out! Please share with all your friends. - - Join us this Saturday! Confronting July 4th: A March to Honor Black + Indigenous Activists. Meet at 2:30pm on July 4th in Brooklyn at Fort Greene Park at Willoughby Ave. We’ll march to Prospect Park for a celebration featuring speakers, performers, and DJs — including @resistancerevivalchorus and Sadiq Bellamy of @soulsummitmusic. More to be announced soon! Share the call! Invite all your friends! #confrontingjuly4th @confronting_july4 - - Schedule: March @ 2:30pm: Meet in Ft. Greene Park @ Willoughby Ave (btwn Myrtle & Dekalb) Rally (Speakers, Performers, DJs) @ 5:00pm: Prospect Park @ Prospect Park West & 15th Street Entrance - - Organized by a coalition of Lesbian and Queer Activists + Filmmakers and Historians in partnership with @bam_brooklyn. Artwork: @squid.licker - - And donate to our GoFundMe if you can (link in bio)

At this time, they are in need of trained marshals for the march. However, even if you aren't a trained marshal, you can still volunteers for the rally portion by directing marchers or setting up/breaking down the performance area.

Photo courtesy of The Coalition to Honor Black and Indigenous Activists