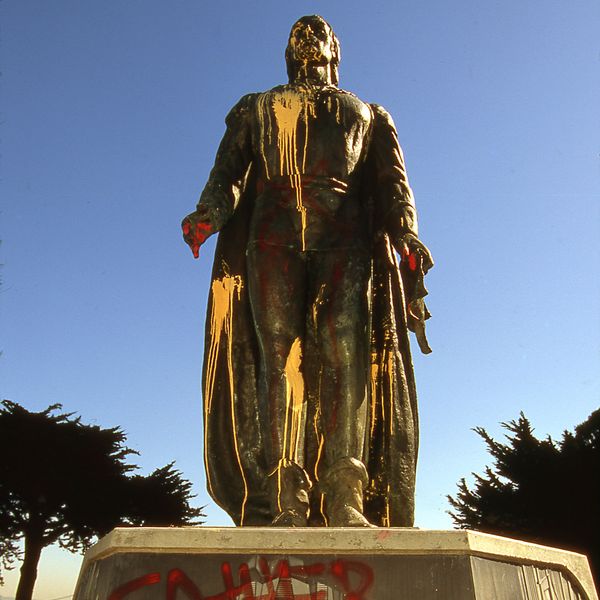 Find More Confederate Landmarks to Dismantle Near You

Since George Floyd's murder on May 25, Black Lives Matter activists and supporters across the country have taken to the streets in protest, called politicians to enact change, donated to bail out funds and urged home states to defund their police. They've reminded us of the countless other Black lives lost who have yet to see justice, including Ahmaud Arbery, Breonna Taylor, Tony McDade and Nina Pop.

And the fight for racial equality hasn't stopped there. In an act of resistance, supporters have banded together to topple long-standing confederate (read: racist) statues and monuments in Southern states. This week, images and videos of defaced statues being torn down have circulated across the internet, from a Gen. Robert E. Lee monument in Richmond, Virginia to a statue of Gen. Williams Carter Wickham, both dating back to the 1890s:

Every Confederate statue in the country is there to remind people of color that white supremacy survived the Civil… https://t.co/3sddeKSDWW
— Jared Yates Sexton (@Jared Yates Sexton)1591536867.0

These symbols of America's racist roots are no longer to be glorified, nor tolerated. Now, with the help of Quartz's online Confederate statue locator tool, you can find a monument near you and spread the word of its whereabouts.

This is how the tool works: type in your zip code and you'll receive a list of nearby monuments, statues, roads and other memorials commemorating Confederates. From there, you will also discover how many miles away they are from your current location.

The tool was started by Quartz in 2015 with the help of SPLC's list of Confederate monuments, and was last updated on August 22, 2017. As written on its website, some of the memorials have since been removed or are slated to be removed. When possible, Quartz says it "indicates that such is case" and that when two dates are given for the creation of a monument, the oldest is "used to calculate its age."

Across the pond, a statue of slave trader Edward Colston was destroyed and thrown into the harbor in Bristol and, similarly to Quartz, UK activists have crowdsourced their own map of colonist and slave trader monuments to dismantle. As reported by Dazed, Topple the Racists was launched by the Stop Trump Coalition, a group established to protest Donald Trump's visit to the country back in 2017.

Whether you're in the US or UK, finding and removing symbols of systemic racism and slavery is one way to becoming a better ally. Don't stop until they've all fallen!