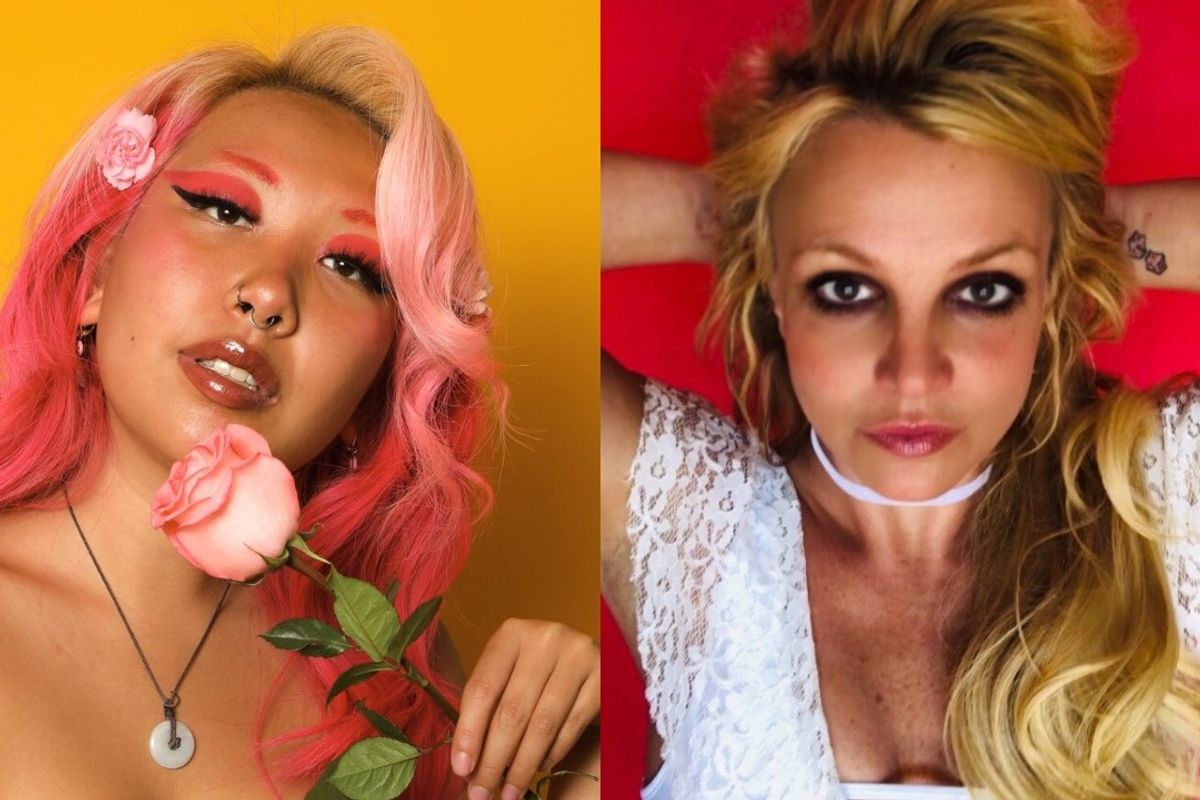 Meet Mimi Zhu, the Socialist Who Convinced Britney to Join the Cause

Few celebrities have a more mysterious social media presence than Britney Spears. The reclusive pop icon can go dark on all platforms for months at a time, and when she's active her output is unpredictable. Amidst dance videos and yoga poses fans interpret coded references to the controversial circumstances of her conservatorship, and her political takes are infamous for their seemingly unintentional poetry. ("Does anyone think global warming is a good thing? I love Lady Gaga. I think she's a really interesting artist.")

There's a lot to unpack at the best of times, but this week Spears scholars were gifted with a whole new thesis title: Is Britney a Marxist? Seemingly inspired by the Bernie bros over at Refinery29, the singer re-posted a short socialist-leaning manifesto which had previously appeared on the publication's grid. The text's original author is Mimi Zhu, a queer Chinese-Australian artist based in Brooklyn who moved to the United States two years ago to pursue her twin dreams of writing and community organizing.

Needless to say, she did not expect her message about wealth redistribution during the coronavirus crisis to gain this kind of traction.

PAPER caught up with Zhu to hear more about her writing practice and brand new superstar comrade.

I imagine it has been a crazy past 24 hours.

Yeah, it's been really intense, and really surreal.

There's no possible way you could have predicted that this was how your message was going to get broadcast to the world.

Not at all, not at all. I think — well obviously Britney Spears, she is just such an iconic figure in all of our lives, in all of our youths, in our childhoods. Britney Spears was a very prominent figure in mine — I used to sing and dance to her songs, at talent shows and whatever. So when I found out, I literally dropped my phone, I was like Britney? I was so on it, and grateful, I was like wow she resonated with something I wrote.

I wrote this with the intention of — honestly writing it for myself and my communities, because we are in such a time of confusion, disconnect, and despair that I felt it really important and necessary to write about that for my own sanity and mental health. To talk about togetherness, and to talk about how we are going to cope with all the ongoing shifts. At least in New York, all of my friends got pretty much laid off [due to coronavirus shutdowns]. A lot of people are stressing about rent, basic necessities, and how to live and just kind of carrying all that.

With all that anxiety and confusion I knew I had to write what I wrote, and there were definitely socialist undertones, because in general that is what I do believe in. I really just wanted to write out a message of connection and tenderness during this really chaotic time. And the fact that Britney Spears — somebody whose position and path in life is so different to mine, and yet I have connected to her as a child — I thought that was a really interesting connection between the two of us, the fact that she resonated with something I wrote, while in my childhood I resonated with some things she has done.

How do you think that she found your post?

So the reason that I know is because the way that she tagged is very interesting. So she tagged Refinery29, and Refinery29 a couple of days before that had reposted from me. So, I think she discovered it through them, so she tagged them, I assume she might think that I am a writer for them so she thought that was the source. So there was a little confusion in the mix as to what the original source was, but yeah I think it's Refinery29 is where she found it.

Related | Celebrities Are Pivoting to Marxism In Light of COVID-19

Right, she was trying to do the right thing, with the tagging and attribution!

Yeah, exactly! And I have not been mad, not been upset, just really been like giggling this whole time. I have seen the image floating around a lot, and that's when I thought it was important to tweet about it. I was like, "Hey just putting a name and face to the name, so you can find the original work."

I just think a lot of creative work gets lost in the cloud so I just want to clear that up, provide some clarity. Some Britney stans kind of misinterpreted it as me coming for Britney. But no, that's not what I am saying, I just think that the original source of work has to be traced. I had a few people say, "Your name's on the post, what else do you want?" That is just telling of the ways people are not willing to recognize a writer's work. It still doesn't trace back to the original source and it doesn't help uplift and compensate writers, and creative people, or anybody for the work when credit is due. I am not saying she didn't credit me, I am just saying it is important to trace back to the original source.

On the flip side, I have gotten a lot of support, and people have stood up for me. And people have been really resonating with it, including you, you reached out to me, and I am really grateful for that. People that are actually reaching out to find out what the writer has to say as well.

How does this particular piece of writing fit into your wider practice?

So, I have a newsletter that I have been writing for about a year now. It's called Write to Heal. As the title suggests, writing is a really powerful way to heal from trauma. It's definitely what helped me through a lot of personal trauma, assault and violence, but also it's helped me heal from societal trauma. My work a lot of the time has very frequent themes of radical love, which I learned from my friends. I learned from a lot of grassroots collectives in New York City actually, and they have all really helped me center myself and make my writing about just a radical way of finding hope within these systems, connecting with each other, and finding community. So my writing is all kind of centering in on the ethic of love, and the practice of love, and in creating better worlds for all of us.

"Comrade Britney" has become a meme thanks to your post. Is it fair to say you identify as a socialist?

Yea, I definitely do. I am Bernie 2020, I have just thought this is so fun, and so funny. Like, using pop culture as a means to talk about radical change is actually really, really cool, and I think it has opened up a conversation that is really important.

And there has been pushback on it too. I really appreciate people saying, "Oh how can you call Britney a socialist when she is rich? When we talk about eating the rich and all of that." I don't really have the answers to that but I think the nuances of these conversations, and the ways that they are being brought up are important in themselves.

It's really interesting, and the three rose emojis thing she posted, I don't know if you saw that, that was so funny. And the Democratic Socialist party of America commented on that too. I think the ways that this has evolved, and the ways that all of these Photoshop images have emerged, Comrade Britney, I think it's a moment of hope that we all needed at this time.

We all see our social media feeds, we're kind of sucked into that right now because what else can we do. It's all like COVID-19, all the tragedies, the political landscape. So "Britney Spears is a comrade" is a light that we all kind of needed right now. It's humbling, interesting, really funny, and cool to have been at the beginnings of that and to have written the message that she resonated with.

People are disappointed with a lot of celebrity reactions to coronavirus. A lot of words, not a lot of action, not a lot of money donated. I think that this was kind of a surprising break from that — comparing this post to the "Imagine" video, for example.

Oh, that was garbage. Garbage. Yeah. I just remember writing the piece and honestly being a little hesitant to write about wealth redistribution because those are strong words with political undertones. Sometimes in my writing I have shied away from doing that. But I think now is such a desperate time that I couldn't not. I have to say this because it is what we need, it is a necessity at this point.

Rent strike is a necessity at this point, donating, wealth redistribution, in terms of face masks, beds, accessible healthcare, is necessary for the state of the country, of the world. So writing that was taking a risk, personally, but Britney having read that, having seen that and posting it anyway was hella cool, and did way more than the "Imagine" video could have ever done, you know? If the "Imagine" video asked for a donation, or matched a dollar for every view would be doing something but, it didn't but that's on them. The celebrities have so much to give, and now is the time to do it and we are waiting.

Yes, I am definitely fucking waiting. Are you familiar with the #FreeBritney movement at all? I think that adds an really intriguing layer to all of this. She is under this conservatorship, so she doesn't personally have control over her own finances. So, you could read this as a coded message about the conditions of her conservatorship and the fact that she can't really redistribute her own money.

I had no idea! I am going to do some research into that, because she has already been an icon to me. I have also seen that this is not the first time she has been connected to Marxism. I had no idea about #FreeBritney, but you know what? #FreeBritney for life!

Right, I mean since she was like a kid, really young, she has been at the hands of all these record companies, and she has been used as a symbol, a face, and a body, you know what I mean. So now it's a little different, I hope she is doing okay.

Do you have a message for your new audience?

The ways that it's providing some kind of hope and tenderness for everybody during this tough time. I think that this was a moment that we all kind of needed, and I needed too, it's been such a ridiculously surreal moment. I am really grateful, and I hope that we can keep supporting each other, and that we can keep finding hope, and love, and tenderness, and the words that we all really need right now in the art, in the joy and the community and the connectivity that we are finding right now within all of this chaos. Comrade Mimi loves comrade Britney.

You can venmo Zhu @mimizhu