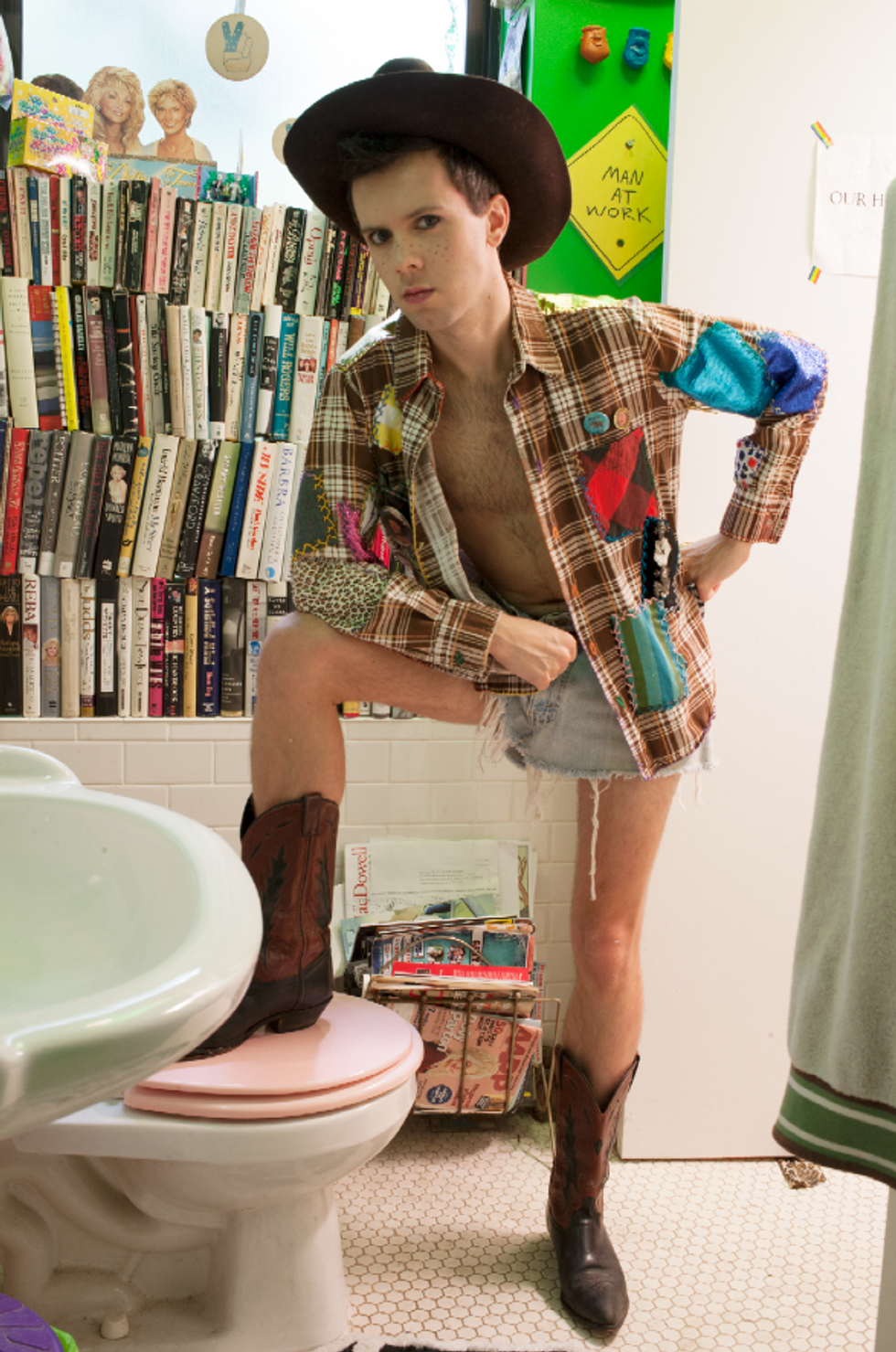 Have you ever been in a car accident?" Cole Escola, the comedian and performer, asks suddenly and intently during a lull in conversation one afternoon over iced coffee's at Lucien on First Ave. Apropos of nothing and wholly serious. A line of rhetorical questioning you might hear in the opening voice-over to an installment of HBO's Lifestories: Families in Crisis or a Kellie Martin vehicle, above soft flutes and idyllic establishing shots. I answer with my own prosaic story, not fully grasping the tee-up. To which he counters:

"I was a passenger in one."

"We went off the road into a ditch, but there was a soft landing. It was...thrilling. And I screamed, 'Not my face!'"

He grabs his periwinkle Warby Parker glasses as part of the bit and then I get it, if a beat or two late. You see, Cole Escola is a master of the dramatic 'ape;' the on-the-nose and seamless conjuring of characters and moments that resonate deeply and always hilariously, summoned with sly virtuosity. This time it was the 'wistful after-school special hero/heroine,' if only just for 10 seconds. But on stage and in his prodigious YouTube videos there is Jennifer Convertibles, the forever-embattled furniture heiress or Commuter Goblin, a downtown office drone who just so happens to be a grotesque dwarf-creature catching the PATH, among others. His preternaturally boyish build and wide, saucer eyes allow him to inhabit the characters with an innocence and honesty like a child playing dress-up. And when you realize the grown man beneath the wig is the quickest and funniest in the room, it feels like a dirty con.

These quicksilver illuminations are just a few of what Escola has on offer for his show, Cole Escola is the First Gay President, at 9:30 pm this Saturday at The Duplex. The hour-ish long show he has put on every few months or so for the last year, to insidery acclaim and a consistently sell-out box office.

"I write a new hour every month." And the process?

"I lock myself in my bedroom the week before the show and I stare at my computer until the night before and then I write an hour of material based on wigs. I hate talking about it because the idea of, like, characters is so gross to me." So then where is the satisfaction?

"I love doing it. And I just think I'm better than everyone else," he deadpans. But fair enough and honestly, hard to argue with.

The slap-dash, wig-based, night-before approach seems to work. He employs some off stage voices to add reality to the characters and their worlds with Cole himself doing sound cues on stage with his MacBook. To see him in that tiny, musty upstairs venue is something of a throwback, especially in the context of the historic neighborhood with Stonewall and Sheridan Square at its feet. "Cole Escola is a bonafide genius. His live show will make you feel like you're in 1970s New York LOLing ya head off." Lena Dunham tweeted after seeing the show last June, an endorsement as winning as it is ephemeral.

Escola is quick to bring up his childhood in a trailer in rural Oregon, performing as Clifford the Big Red Dog while working at the Scholastic Bookstore in SoHo to precocious Manhattan children, and being mugged and beaten at gunpoint. He recounts these moments without any of the bootstrappy pluck that usually accompanies such narratives, but with a remove as though any of their darkness has already been siphoned into his perfectly and delightfully wrought characters. And then there was his lamentably short-lived Logo TV series with his friend Jeffrey Self. Jeffrey and Cole Casserole ran on Friday nights at midnight for two seasons.

"It was perfect. Everyone's home then," he offered sarcastically, noting that he kept his day job at a gluten free bakery in the LES during the whole run.

But Cole is heading back to series television this summer, with a role on the Amy Poehler-produced Hulu comedy, Difficult People, starring Billy Eichner and Julie Klausner as a pair of struggling, unself-aware New York comedians, premiering this August. He plays a waiter and nemesis of Eichner.

"My character is an obnoxious young show queen." Not too far from his actual personality he admits. And he is a recent Hulu devotee since they have every episode of his TV obsession, the Good Wife. "There's five seasons. It's great if you're going through a breakup or something and you just need to - not that I would know."

Among his other obsessions are the strangely compelling (or horrifying, depending on who you ask) ASMR videos to be found on YouTube. Standing for 'autonomous sensory meridian response,' they feature people speaking softly or making repetitive soft noise so as to produce a physical effect on the listener, usually goosebumps or chills, often involving vaguely sexual roleplay.

"People do doctor check-ups or a popular one is hair stylists, like hair appointments. I find really effeminate gay guys really soothing, their voices. So I watch a lot of ASMR twinks." A sub-genre within a sub-genre to be sure and perhaps a character we may find at the Duplex at some point.

I ask him which characters will make it into the show this Saturday. Maybe Peg Adamson, the dead-behind-the-eyes cleaning lady, or Hot Southern Baby, a diapered Tennessee Williams-spouting infant? Or perhaps Extremely Frustrated Anchor Woman ? He isn't quite sure, because at this point there is more than a week left. Far too much time make a decision and who knows what wigs will turn up.


Cole wears a shirt by Larry Krone BRAND.
You May Also Like
Fashion