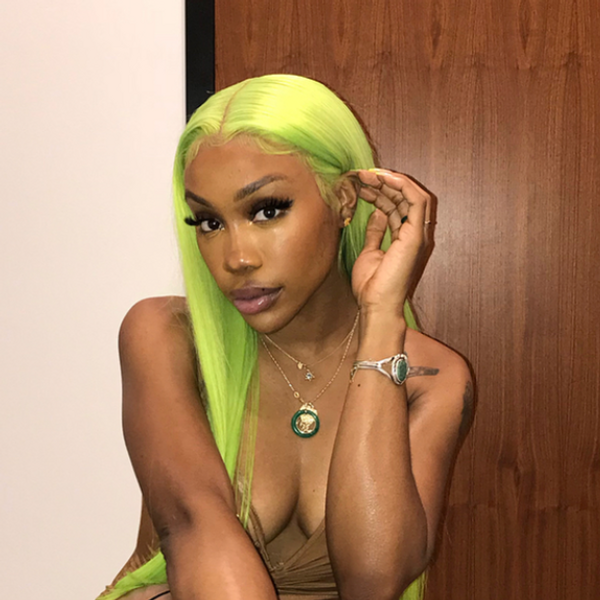 Color Experts Weigh In On the Slime Green Trend

Anatomy of a trend, part two.

By this point, it seems that the presence of what we've been calling "slime green" is everywhere: from outfits and hair looks worn by Kim Kardashian and SZA to close-knit fashion circles to street style. In figuring out how these sorts of uber-popular color trends start (or how they continue), we thought it best to obtain expert opinion, especially for a color this assertively vibrant.

PAPER spoke to NYC-based artists and color theorists Nic Walter, Roxie Darling, and Jeanise Aviles, whose ideas on how slime green became our new normal range from the fascinatingly historical to the essentially spiritual. Learn more by reading on, and taking a tour through your faves rocking some major slime green looks.

The phenomenon of the "single color as cultural meme" is extremely interesting. First, it reveals that culturally, color is understood to be atomic, indivisible, that it can travel and attach itself to an endless array of physical forms without losing any of itself in the process. As a result, color is understood to be something that you do not need to see closely to emulate.

This "you know it when you see it" effect allows any single color to be easily traced or emulated, whether you're Pantone, Miranda Priestly or Joe Anna from Louisiana. As long as you have access to the Internet, you can trace the majority of a color's family tree just through Google Images.

This phenomenon of wearing a single color to relate to others who wear that color is not new. Look at the Roman togas, which differentiated class and standing by color alone for instance. Another interesting parallel of single color trends can be found war: armies, by necessity, often have to wear the exact same color. It's almost by wearing the same color as a celebrity you are, in a sense, joining forces, tapping into their endorsement of the color and thus binding yourself to whatever you believe they stand for.

"By wearing the same color as a celebrity you are, in a sense, joining forces, tapping into their endorsement of the color."

The problem in all of this is that colors are actually relative; their qualities change depending on their context. [German artist] Josef Albers demonstrated this beautifully by showing that a single shade of tangerine can look completely different when surrounded by cadmium red versus canary yellow. There is also a level of cultural context that influences how we see colors. For example, some cultures do not have a word for certain colors, such as the Himba tribe in Namibia, which has no word for the color blue and thus, some studies suggest, are less able to distinguish it from the color black.

These nuances are missing from the "single color as meme" conversation. When I wear slime green, it is not really the same color as when SZA wears slime green. The color is transformed on each of us given our skin tones, differences in the materials, the lighting we have, and the colors in our immediate environment.

This actually is somewhat of a relief for me, personally, because it ensures that no two people will look the exact same, even if they wear what seems to be the exact same color. There's a connection, of course, but optics are on the side of individuality on this one.

I feel like there is something really healthy or vital about the color. It's also a way of being very expressive and present and bordering on offensive. However, green is the color of new growth and life, and it has a sense of emergence about it. And because it's green, it's also kind of comfortable to all of those around us. Mint green is typically a little more medical and too soft, it can almost be a pushover color. However this slime color, in some cases, is a little more tawny; it's very assertive without being aggressive, which I believe is the new way to be heard. It's almost subliminal.

My own vibe about green right now is this: the reason why I'm wearing it is because I need to lead with my heart. I need to be aware and conscious of my heart right now; green is the color of the heart and love chakra. There is so much uncovering in the world in terms of hate, secrets, and distortion, which is a lot to take. The green keeps me in alignment with acting and speaking with love. It's like a battle color that you can show your love power with. If I had to guess, I'd say that others are recognizing green in the world because the pink wave has turned over, and maybe it's more in your face; maybe it's environmental. It's the word on the street. I think it gets into people's brains as well. In my mind, and from what I'm seeing, it's a color that represents a spiritual fight against all we're trying to dismantle right now.