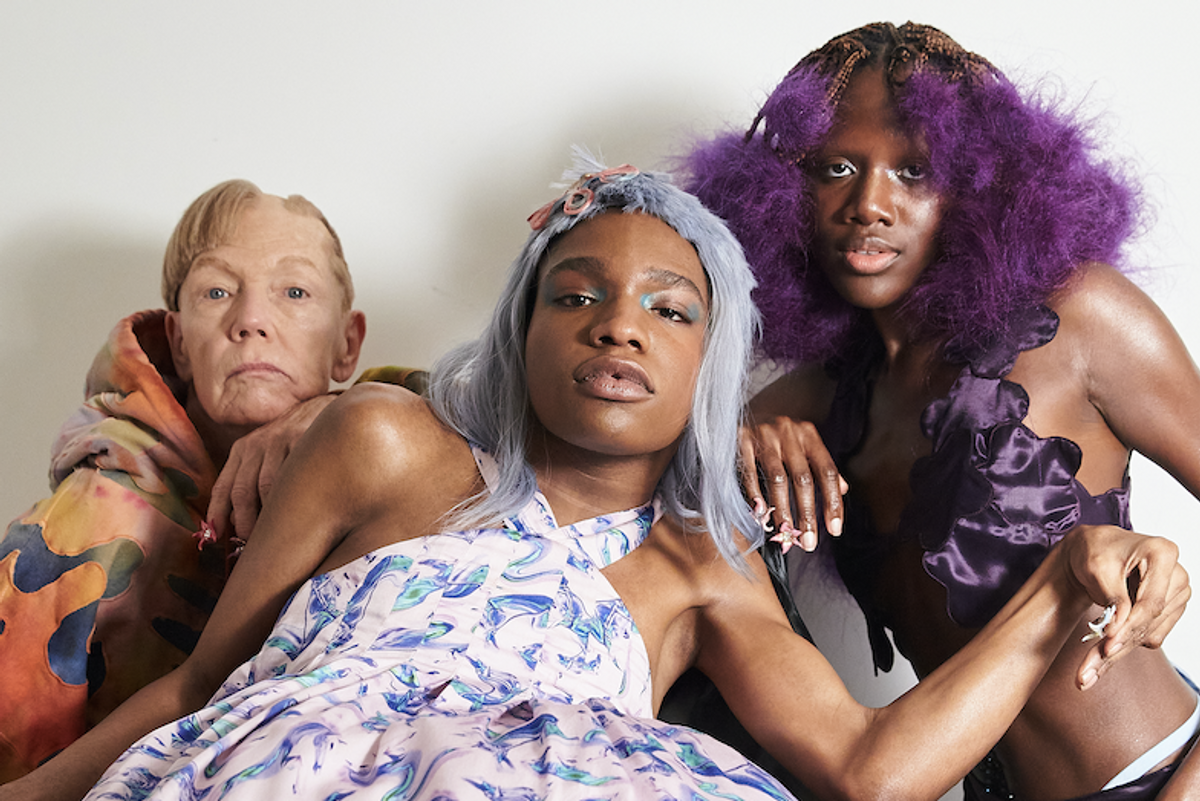 When designer Hillary Taymour of Collina Strada was approached by the Gucci team to be a part of Guccifest, she had already been contemplating creating some sort of video game based off her last show, so she jumped at the opportunity. The week-long online fashion and video festival, headlined by a new Gucci miniseries titled "Ouverture of Something That Never Ended," invited 15 artists to create their own fashion films as part of the programming. (Taymour's film debuted on Day One yesterday.)

With new support from Gucci, the resulting five-level interactive game incorporates 12 new designs from Collina Strada's Pre-Fall 2021 collection, as well as an all-star cast of faces including Alva Clare, Aaron Philip and Gucci-favorite Yuniya P. The models jump, flip and swim through a virtual world called Collina Land, where tackling climate change is not only encouraged but rewarded.

Using scanning techniques with help from Black-owned 3D scanning tech company Capture It In 3D, the game explores different environments featuring everything from purple and pink horse snails to giant neon yellow cows and life-size pieces of burnt toast. (All of the clothes were made and can be worn in real-life in addition to being scanned virtually.) Users can plant trees and feed corn to farm animals, among other eco-friendly activities.

"You know, building your game isn't easy," she tells me from her New York studio. "I wouldn't recommend it for the faint of heart, but it's definitely cool to be able to create your own world and landscape within that culture."

Working with a large team is something she typically only does when it comes to putting together fashion shows and photoshoots. (Most time she's going at it solo or with her collaborator Charlie Engman.) "It was a long, fun process to build a Collina World, but definitely a lot of roadblocks that you'd think would be easy but are not easy," she says.

"I understand a lot more than I used to about video games, but I'm more of a puzzle person," she says when asked if she would describe herself as a gamer girl now. "I would love to introduce more puzzle-y type quests in the game. Like, more abstract and existential questions while playing — which I think is something that lacks in video games."

The clothes are also slightly new territory for her — she felt more compelled to experiment with embellishments and statement flourishes like big oversized sleeves and colorful sparkles, given that these pieces would be 3D scanned and needed to stand out. "Everyone is doing that with games like Animal Crossing," Taymour says. "I don't think it's a completely new idea for anyone, but I think it's a fun direction."

Following her acclaimed Spring 2021 film at Fashion Week in September, Taymour is one of many rethinking the parameters of a traditional runway show. "It's interesting because bigger brands are trying to think about what will happen in ten years when they are unable to make collections because it's not feasible for the real world," she says. "Do we make digital collections? Are there Patreon subscribers? You have to think outside the box about how to fund the brands without making as much product for the brand."

Taymour is excited about the different possibilities and ways to get involved with her brand and what she does physically, but is very much happy to continue experimenting with digital formats. "I think we will continue to update this video game," she says. "It's not the final one."

Check out the full "Collina Land" film below and play the videogame now at CollinaStrada.com.