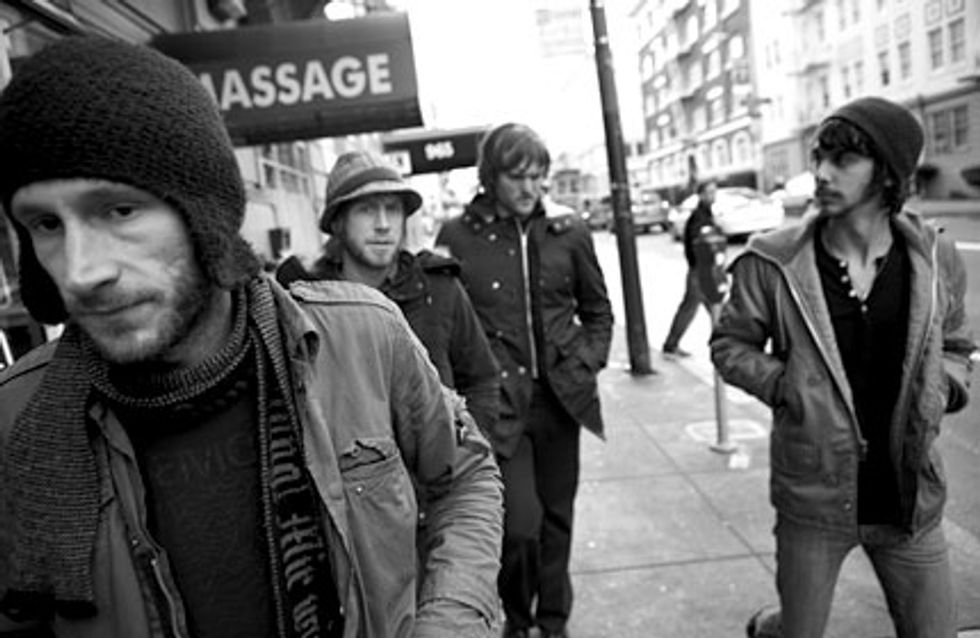 Last week I wrote about the Figurines live show at Bowery Ballroom.  The Cold War Kids opened for them and I wasn't really into them at the time.  But then I saw the same show again two nights later and I would now like to eat my words, so here goes:

The Cold War Kids from Fullerton, California are far from boring.  Their blues and soul inspired music is catchy as all hell and their live performances are full of infectious energy and commotion.  It's quite a site to behold, full of clanging, clapping, stomping and passionate wailing.

They're on tour for quite some time with The Figurines and Tapes 'N Tapes, but bassist Matt took a few moments to answer some questions I had boiling around in my head after seeing their live show:

Your show, to say the least, was incredibly captivating and visceral (something that doesn't quite come across on the record).  So when you're writing songs, is movement and motion as much a part of the process as the lyrics and melody?  Do you think people need to see you live in order to fully appreciate Cold War Kids?

Usually when we're writing we don't move around too much.  Usually we have
the lights pretty low too.   Songs usually take quite a long time to churn over before they're done, so theres not much movement in writing.  Although, in the studio we've moved around quite a bit at times.   People have said that the recorded songs come across a bit different than the live set.

Your enthusiasm seems never ending.  Are you guys constantly exhausted?  If not, where do you get all this energy from on a daily basis?

Our sets normally haven't been that long.  I think sometimes post-show time can be the most tiring.  Leaving the club and finding proper lodging (or sleeping in the van at a 24 hour wall mart) can be more exhausting than the show.  But the show at times can be very exhausting

What's the most exciting thing you've experienced so far being in Cold War Kids?  (This could be a tour story, or a song writing experience, or anything that's amazed you about being in the band.)

I can't speak for the other guys, but I know that one of my favorite experiences is when we were recording our very first demo in LA almost 2 years ago.   We recorded 3 songs in the middle of the night (by a student, for his sound engineering project).   Matt and I were in the sound booth while Jonnie and Nathan were in the studio doing the vocals for "Don't Let Your Love Grow Away From Me."  It was completely dark in the studio, and Jonnie was holding a lighter for Nathan to read off of his lyric sheet.   It was the only light in the whole studio.   Everything about the moment was interesting.  I was videoing it with my little camera on night vision.  I don't think I've ever watched it though.

Where's the one place you guys are dying to play but have yet to tour through?

I know that I'd really like to play in Brazil and Germany.

Where are the Cold War Kids going from here?

For one, I know we all really want to write some new songs.  I know all 4 of us are really aiming at that.   We'll be touring quite a bit in the time to come, and we'll continue to document our journey to wherever it takes us.  As of immediate plans, tomorrow we play Tucson AZ at a great venue called Solar Culture.  Last April, they had some good home cooking for us and the Two Gallants when we came through.  Hopefully tomorrow it's the same scenario.