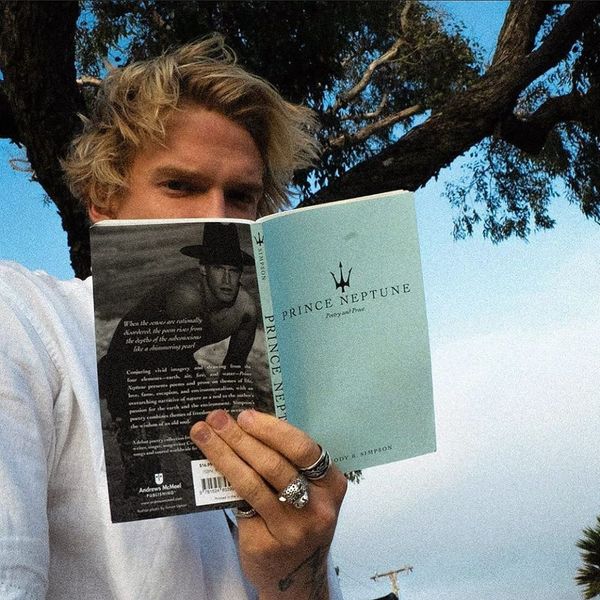 Cody Simpson Turns to Poetry During the Great Reset

When Australian musician Cody Simpson visits the sea, he is reminded of home. Before bringing a poem, song or other work of art into being, he enters a particular headspace, one that allows his mind and worries to clear, that nurtures his inner self. Perhaps he'll surf, maybe he'll swim or even meditate. What better time than now, as the world seems to be entering a great reset?

Most of all, the aforementioned activities allow Simpson to connect with the Earth, a source of inspiration behind his debut book, a poetry collection called Prince Neptune: Poetry and Prose that was released on April 7. It also tackles subjects of love, fame and time, composed of short poems, stories and quotes. Music connected to the book is also on its way, making 2020 a year of transformation and reflection for Simpson.

"I've been inspired by nature and the ocean for my whole life growing up in Australia, coastal by the beach, being a surfer and a swimmer," he says. "It was a natural, intrinsic part of my lifestyle, and a constant source of inspiration for me not only in my music, but in my poetry also. I wanted to weave those kinds of things along with the environmental topics throughout the book, it being an escapism into nature and into another world."

Crashing waves, turbulent tides and shimmering beaches encompassed Simpson's childhood in his native Australia, where he once lived in a coastal community before rising to fame as a teenager. Simpson currently resides in Los Angeles, which is not too different from the environment he adored as a kid. As he embraces the Prince Neptune moniker, derived from King Neptune of Roman mythology, Simpson also affirms a version of himself that's developed over five tumultuous years in LA. He documents this through prose that demonstrates his love of nature — an ode to the Earth in a time when many of us are finally awakening to the consequences of long-term environmental destruction.

Simpson says Prince Neptune is more than a pseudonym, but rather a name for a new, transformed self. "I wanted to assume the role of Prince Neptune, use it as a pen name and alter ego... an alias," he says. "I've been filling up several notebooks with poetry, prose and thoughts. Works from this book [date back to] when I was 18, five years ago. These are all selections from probably four or five notebooks that I amassed over that period of time." Simpson was able to narrow down more than 100 poems to feature in this collection, out of "close to 300 poems" he had written altogether.

Although many fans online are choosing their favorite poems from the book, Simpson says it isn't easy for him to do. "For me, I really like some of the shorter ones, like, 'Man has never discovered new islands in previously charted waters,'" he says. "They all mean something different to me, so it's very difficult to decide what I like best or if I have a favorite in the book. For me, the book itself is the favorite."

When Simpson is alone with his thoughts, he lets a stream of consciousness guide his writing — his favorite style of poetry, because he can make the rules up as he goes. To that end, Simpson pays homage to 1950s prose by American writers such as Jack Kerouac and Allen Ginsberg. "I'm inspired by many different styles of poetry," Simpson says, "Some of what I write is more aphorisms, quotes and sayings, and then sometimes I'll write short stories, bits of prose."

As for his go-to writing methods, Simpson mixes mediums, whether scribbling lines on paper, clicking away on a vintage '50s typewriter or jotting down thoughts in his iPhone notes when on-the-go. "I have a set-up in my house with stacks of books and my old '50s typewriter," he says. "I definitely have a creative space that I'll go to work in intentionally, but sometimes I won't be able to be there so I'll just have to keep my notebook with me." Like many creatives, Simpson finds that keeping a notebook at all times helps him document his ideas as soon as they come.

As for music, Simpson has independently released songs since 2015. Last October, he put out "golden thing," a heartfelt acoustic ballad that shows off Simpson's raw charisma. And on "captain's dance with the devil," unveiled live on Instagram earlier this month, Simpson sings about a young sailor who's "going to drown" and tempted by the darkness of the world.

Given Simpson's maturing sound and artistic evolution, it's almost difficult to remember the star who was plastered on posters stapled into teen magazines, then known for singing "Pretty Brown Eyes." Fans of this new style will be pleased to know that there's more to come, as Simpson alludes to his upcoming album, set for release sometime this month. He calls it both an "extension" and a "next step forward" from what people can see in his poetry.

Like so many musicians and traveling writers, Simpson has had to cancel his nine-city US book tour and other shows in light of the COVID-19 pandemic. Not one to be brought down, Simpson decided to host frequent Instagram Live videos to interact with fans, answer questions, perform sneak peeks for them and still sign copies of his book. He's been connecting live every day since the quarantine began.

Simpson hopes that fans witnessing his creative rebirth can feel inspired to explore their own new avenues during quarantine. "There have been periods like this in history in which there was no means of connection outside of being face-to-face," Simpson says. "You can imagine how difficult that would've been. It's been a blessing as a musician, especially releasing a book at this time. It's made it much easier than it would've been otherwise."

He continues, "[Modes of] creativity are the best, cathartic and most relieving things you can do: writing, playing an instrument or whatever someone's creative practice is, drawing, painting. Pull yourself into your own little private world, and for me during this time, because we've had so much time to do that, it's the best time to be creative, to read books and find new sources of inspiration. This is part of the reason I wanted to release the book and keep the date the same after all of this happened with the pandemic. I thought that it [could be] something my fans would need at the moment."

Buy a copy of "Prince Neptune: Poetry and Prose" here.