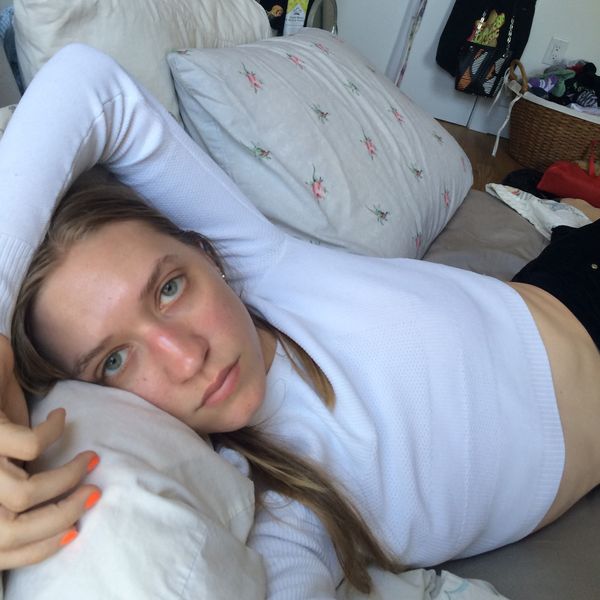 Indie's first daughter, Coco Gordon Moore — the daughter of Sonic Youth's Kim Gordon and Thurston Moore — has accomplished a lot at the age of 23. She has modeled on runways for designers like Eckhaus Latta, been the face of brand campaigns like MadeMe's X-Girl collab, graduated with a BFA from the School of the Art Institute of Chicago, and published several chapbooks. But she uses this platform to authentically create change.

Moore's practice focuses on the intersection of sexual violence, gender, and desire. In the past, proceeds from her work have benefitted organizations like Women of Color Against Violence, Massachusetts Bail Fund, and No Means No. She thinks deeply about the political potential of art, telling me that she is making an effort to read predominantly women of color writers, and that she sells work on a sliding scale to ensure that it is accessible.

She recently released her sophomore chapbook called today i hate the sun, which features poems and cover art that is a self-portrait she made in kindergarten. The proceeds of the book sales go to The Brooklyn Community Bail Fund, which Gordon says, "pay bail for those who cannot afford it and continues to fight to end the unjust system of cash bail," which keeps low income people incarcerated for long periods of time before they have even had a trial.

PAPER talked with the young artist about her new chapbook, the importance of working with and centering women, and Drake's "Nice For What" music video.

How did you get the idea to make your chapbook?

I started writing everything about a year ago, last fall. They were really hard poems to write, and especially to edit. They came from a place of confusion and heartbreak. After that, it took a few more months to put it together. I printed all of it at a local library and got a giant stapler and stapled them all. I've slowly been mailing them out.

Usually I'll write a bunch then go back and edit it myself a little bit. My roommate studied writing and poetry in college, and one of my closest friends is also a poet. She knows what's good, knows how to edit and teaches a bunch of workshops. They both helped me edit it, which gives me more perspective.

coco gordon moore on Instagram: “my chapbook "today i hate the sun" is now for sale on my site (link in bio) ! incredibly nervous and excited to release this work out into…”

Do you have a favorite poem from the book?

I don't know, maybe one of the last ones — the one for my mom. There's A Crack In The Carpet There's A Drain In My Chest. I like that one a lot or Sometimes I'm screaming, or Men Created TMJ. It's funny to say the titles out loud. I Read This In A Heated Moment. I like that one too. I don't know, I've read it so many times that I just hate all of them, honestly.

I understand that feeling of not being able to be objective about something you've worked on for so long.

I know. Now I'm reading them like, "Are these good?" I have no idea anymore, but it's happening.

It's a very relatable feeling, but I think that's what makes work good — when you're always questioning it.

Yeah definitely. There are already things I would change which I like because now I get to work on new stuff and have learned from this process. This is the first time I've made the entire book by myself. The last chapbook I did, which was the first one I ever did, I released through Feeding Tube Records and Rozz Tox Art Gallery. They sold them and printed them for me, so it was much easier. This has been a more hands-on project, but I like that. I like having to learn how to do it.

What poetry are you reading?

I love Maggie Nelson, I love Mary Gaitskill. June Jordan I've been really obsessed with. Robin Coste Lewis. That's probably the main stack of books next to my bed. I recently just started getting into reading poetry, so I've been trying to read works by women that have been around for longer — just things I feel like I should know before I start getting into writing. Especially books written by women of color because I think they have the most important things to say. I also really love Jamaica Kincaid. Her novels are almost like reading poetry but it's a novel. I'm just like, "This is so unbelievable."

Why did you choose to have the profits from your book go to Brooklyn Bail Fund?

I was deciding between a few organizations. [I wondered,] "Do I want to donate to one that's specifically for women?" I've donated to Massachusetts Bail Fund because I'm from Massachusetts. Ultimately, I decided on Brooklyn because I'm living here now and I might as well try to give back to the community I've come and gentrified. It's the least I can do. And also, hopefully it's raising awareness for people that don't know about bail funds. I'm still learning about bail funds and the issues of cash bail. People have asked me what the Brooklyn Bail Fund is. I'm just trying to get the word out there that we should try and end cash bail, and at least try to give our money to bail funds until there is a better system put in place.

Do you think of your work as political?

That's not what I'm thinking about when I go into it, but I guess there is a political feeling or statement attached. It is about women and the sexual violence we endure in the most banal ways and being so done with being put into a box. I feel like sometimes I write about my exhaustion of being viewed as a whore or a Madonna, or a victim that has to be saved — just view me as a person and not these different things. It's an exhausting game that I don't want to play. All women experience this, not just me, so I'm hoping that my words can make someone feel comfortable or like they can relate. I know when I'm reading something and I can relate it, it makes a difference in my life.

Do you feel like you are writing for women?

It's interesting when you make political work, thinking about who your audience is. You want people with a lot of privilege to think about it, but also you want to center the people you're writing to.

Especially with my visual art. (Which is different because from my poetry, because the books are $10 so they're cheap). The art world doesn't make sense to me. People are selling paintings for $100,000, but the work I make is for women first and foremost, so I want to make my work affordable for them, especially low-income women. Art should be affordable for everyone. That's such an important thing for me, so I'll do a sliding scale when I sell my art. Women of color and low-income women can pay whatever they want. White men have to pay the full price. That's literally how I am doing it.

Not everyone accesses work in the same way or comes with the same background. Obviously, I have the privilege to do that because I make money from modeling so I have the ability to give away all of the money I make from art and be able to sell some pieces for less. So I feel like anyone in this position, which I know a lot of people are in, should be doing this.

coco gordon moore on Instagram: “Tomorrow! 😬 my 2nd chapbook, "today i hate the sun" will be available to purchase on my site cocogm.com all proceeds will be donated to…”

It really depends. Sometimes I'm like, "That was a soul-sucking shoot." Especially when I have male photographers I'm just like "Ugh." It's a little intense having men be grabbing at your body and positioning you. That's part of the job and that's fine, but when I work with women photographers they actually tell me what they want instead of just grabbing me. It's just a much more fun, smooth process.

I'm lucky I've never been put in a position where I feel really uncomfortable. So many girls are. It's definitely fun though. It's a good way to make money. Also, as an artist, it's a more interesting way to work because when I get to work with different designers I like or on a project that's collaborative or with photographers or filmmakers I look up to, that's really cool.

What you're saying about working with female photographers makes me think of the director who made Drake's "Nice For What" video. It's still a video for a male artist, but it was really cool to see all of these badass women who weren't overly-sexualized filmed through a female gaze.

I think the whole industry is changing, especially fashion, music, and art, and kind of coming together in this new way like, "Wait, we want to see this." What you were explaining — women taking control in these new roles and making great shit. It's still difficult, obviously. People don't want us to be in positions of power, but it's definitely heading in that direction. Our voices are being heard now more than ever.