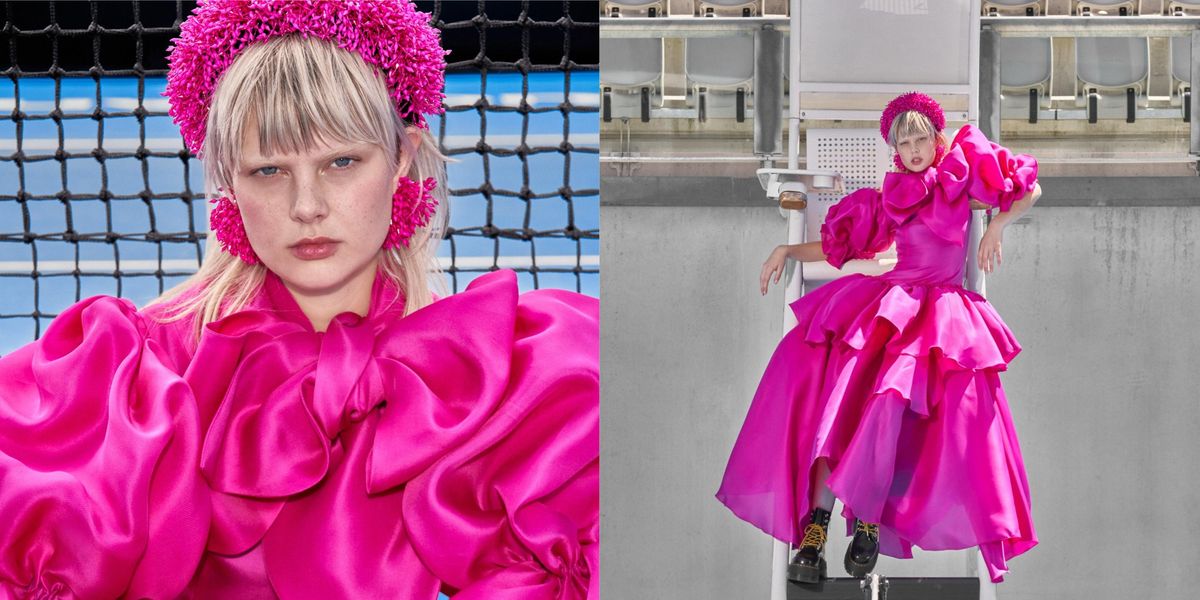 Since founding her namesake label in 2015, Claudia Li has emerged as one of the most compelling designers on the New York fashion circuit. Her collections are known for their intimate storytelling approach, with each season expressing something personal from her upbringing as a Chinese-born, New Zealand-raised designer who was always surrounded by art.

For her first runway show in 2018, Li used only models of Asian descent — from China to Nepal — in order to celebrate the portrayal and representation of Asian identity during Fashion Week. Subsequent shows similarly touched on familial themes and her multi-cultural background. The brand's Fall 2021 collection, which was unveiled in February, expanded on Li's New Zealand roots, where she happened to be based for the past year.

She drew upon the joyful mood of her high school years, particularly the prom days and hometown dances. It was a time where everything was all about fun, excess and glamour, and she credits looking back at that era as helping her rediscover why she first fell in love with fashion. Her latest collection, called "Homecoming," incorporates those references in subtle and direct ways, from the big '80s puffy sleeves and billowing dresses to the meticulous folds, tucks and draping seen throughout.

PAPER caught up with Li to discuss her new collection, returning to New Zealand, the AAPI community and rediscovering her love for fashion.

What's it like to be back in New Zealand?

It's great to be home. It's really different here. I mean, it's obviously less crazy and much simpler. The past two-and-a-half years for us as a company — there's just been a bit a lot going on. We went through a lot and just coming back home, it's kind of like I needed space to clear my head. So in a way it's better for me personally. But my team is still in New York. And with everything that's been happening is just kind of it's scary and I can't be there to help them. My team is entirely Asian.

You recently unveiled your Fall 2021 collection digitally during NYFW. What was special about this season in particular?

We started making the collection when everyone was at home and we couldn't go outside. So you kind of daydream a little bit. And this was before all that craziness happened. It was just kind of the start of lockdown. And I was dreaming about fashion. I feel like it gave me the headspace to imagine and think back more, because a lot of the inspiration that we had comes from my memories or weird thoughts. I got to thinking about the first time I actually fell in love with fashion. It was in high school. Fashion then was just everything to me, it was something dreamy and glamorous and fun.

You've mentioned before how you stopped worrying about other people's expectations of your work. How did that carry through for Fall 2021?

It wasn't so much about having to listen to the stores or what they want and this person, what they want, what they think, like what everybody else thought about me or what I make or my clothes. And I feel like this has something to do with the past two years as well. I've been sort of buried under this kind of layer of opinions and suggestions and my projection of other people's projection of me. I feel like I cared way too much about what people thought and like what other people wanted. And this collection was kind of in the sense that I was just purely what I thought, what I wanted.

How did the '80s high school prom theme play into this?

I thought the best place to kind of go about that is to go back to the initial place where I was dreaming about fashion, which was high school in New Zealand. I think American proms nowadays are a bit more like upgraded, our high school prom in New Zealand, it was called the ball. And then we had a disco ball that was really dark. I remember there was like a little spotlight everywhere, it was in a gym, very kind of '80s, early '90s night prom looking. And I had a pink dress. Pink was my favorite color, is actually still my favorite color, just secretly. So that's where the collection kind of started.

How did this collection best represent the idea of you letting loose and being free?

Everything is much bigger and then the skirts are getting puffier. I think also bringing back structure, like all the slouchy shoulder pieces. And I feel like that in the very beginning when we started the first few collections, it was kind of reminiscent of that. I feel like I'm bringing that back because I think in the very beginning, we didn't really have all that stuff around us. And I feel like honestly, looking back at this collection, it is one of my favorite collections so far. But I feel like there is much more to be said. I'm still trying to let everything out which is very typical. When you look back at something, you always think you could have done a lot more.

Tell me about the headbands and jewelry you did with Korean label Fruta.

It's our first official limited edition collaboration with an accessory brand. I think actually I've been wearing the earrings for a while and my team has been wearing them for years as well. So we love them. And the creative director, she used to be an editor as well, and she's also a very fun person. She's moving to Hawaii for a year. But yeah the headband is huge, because I think in high school for me that kind of accessories, like the big boldness, it was the quintessential fashion. The earrings are huge, the headband is super huge, but strangely they're not that heavy. So you can actually wear them if you're going out.

The campaign images were shot on a tennis court. Is there any significance to this?

I sucked [at tennis so] I joined the hockey team. All the family friends' kids, the "good kids" played tennis and I hated it, and I sucked at it because I hated it, so I joined the hockey team instead, and I was good. So the tennis court is more of a representation of my rebellious, dreamy high school years, so I imagine I am in a giant puffy hot pink dress and platform doc martens stomping on a tennis court.

As someone in the AAPI community, how have you been dealing with all the news of anti-Asian violence in recent months?

Obviously we're all angry, but I'm to the point where I just don't even know what to say anymore because it's really frustrating for us, because the problem stems from how early on we've been taught that you have to be polite at all times and just don't cause any trouble, to be the hard working, quiet person. I think that's how we act outside and also how other people see us. So therefore it's the model minority issue. I wasn't like this when I was young. But as I began working in the Western world, I feel like people projected that thought onto me. And slowly, even as I started my own brand, I constantly was getting this feeling of just take it, like you're an Asian designer and you're supposed to be nice and understanding. I think a lot of Asian people, especially Asian women, are just sick and tired of being that image of what the Western world sees us as. And I feel like it's time to actually speak out.

Do you see yourself having runway shows again once Fashion Week resumes?

Oh God I hope so, for me it's nice and different. I think images are really powerful, but I feel like when you see the clothes move in real life, I mean in videos they can capture that obviously. But in real life it's just a different vibe, it's a different sort of sensation. It's the music, the sight, the sounds, it's everything. And you get to see the people that you've been trying to get a drink with for ages, just nobody has time and you see them at Fashion Week.