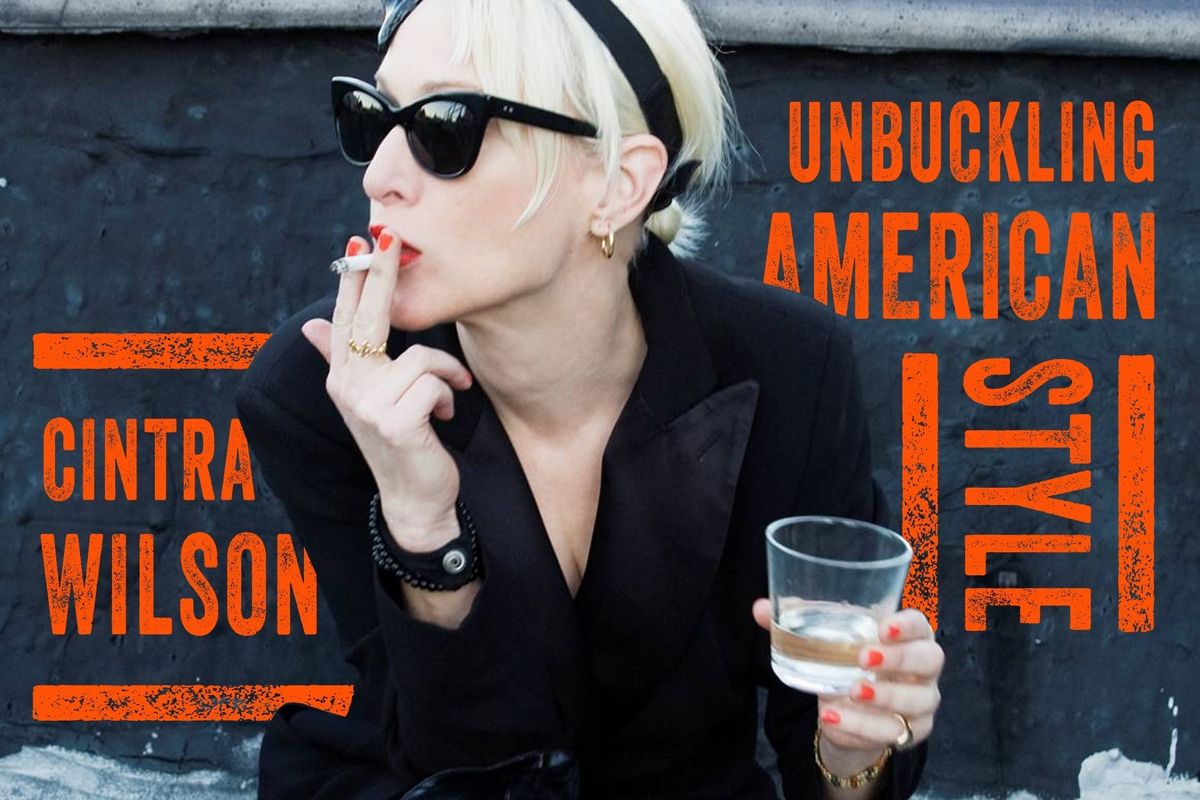 Cintra Wilson is a writer who packs every sentence with a wallop. Jaw dropping allusions drenched in attitude and meaty metaphors that get you asking "What did she just say?" are de rigueur. And as you re-read the sentence you realize there's more to it than you first thought and you fucking LOL . In her latest book Fear and Clothing: Unbuckling American Style, out now, Wilson builds on her three-year stint as the Critical Shopper columnist at the New York Times Style Section. Invoking the Gonzo journalism of Hunter S. Thompson, the risk of falling short of the iconic chronicler only makes her bolder. She's proud to be a "loud-mouthed broad" taking on American style in a "fashion road trip" across the United States with stops along the way to analyze the looks of San Francisco, Utah, DC, Kansas, Miami, NYC et al. Besides being one of the funniest books of the year, Fear and Clothing reaffirms Wilson's standing as a writer's writer. Her scathing columns are legendary. When she left the Times, The Cut ran a story listing Top 20 Highlights from Cintra Wilson's 'Critical Shopper' Column.

As someone who has written about politics -- including a stint at the White House for Rolling Stone -- the unlikely pairing with the world of fashion does not seem out of place for Wilson. The results are often hilarious and enlightening, her skewering observations matched with a rapier wit that could easily spar with Bill Maher.

In fact, to Wilson fashion is politics and vice versa. I arrange to test out her claim to being able to identify people's politics by the clothes they wear. We meet at Eataly, Manhattan's over-stuffed monument to food (and income) excess. Perhaps we can take the temperature of New York City in December, the air balmy, the spending season upon us, pedestrians carrying packages and rushing about in a frenzy of productive consumerism.

"The problem is the diversity," she says, a bandana peaking from under a hat. Gangster chic? "You really can't make any definitive comment about Manhattan fashion. In low income neighborhoods like in downtown Brooklyn where there are a lot of wig stores," she notes, "people dress more fearlessly and exuberantly than they do in midtown. Everybody here pretty much dresses like us. Tasteful black jacket and architect's glasses."

There was a time when wearing all black was equivalent to making a political statement. "That was more of a socio-economic anti-bourgeois statement: Shut up we're on heroin, we're 22, we're going to live forever in a tent in Tompkins Square park."

Eataly is a bit scary to someone who prefers to live on the margins. "I've never actually been in here. Always been intimidated," she says though I'm not sure why given the blandness of the crowd.

"See this look going on here," she says nodding in the direction of a young lady looking at canapés. "Isabel Marant look of five years ago. With different cut army jacket, Vietnam tones, skinny jeans and little low slouchy boot, which started out in Paris. And now every Brooklyn girl on the subway who's Dominican and chewing gum has this look too. Neat. There's something to be said for the democratization of trend Nazism."

I mention attending Miami Art Basel. "I don't believe in Santa Claus, Easter Bunny or Art Basel," she blurts out. "Miami fashion? Nude with jewelry. It's that familiar style crowd. Biennale style. Same fashion in Venice or Istanbul. Shredded Lanvin and Margiela. And racks of shoes covered in Gesso."

Having lived off her talents with words, Wilson feels like she's reached a turning point. "I'm going to restructure my life radically," she says. "A combination of journalism and writing books used to be a sustaining economic model. Not anymore."

So what, then? Amy Schumer has opened doors for loud-mouthed broads. Maybe LA and writing for TV? "I have been a loud-mouthed broad for a long time," she says. "I started as a stand up. I won the Mug Root Beer Junior Comedy Competition two years in a row when I was 13 and 14. I was supposed to be a comic. But that world turned me off. So I took the other road of being a playwright."

Whatever the next chapter, glad to have had Fear and Clothing dropped on us. When the space aliens come to save our planet, they'll have this book as a hilarious reminder of the folly that was.