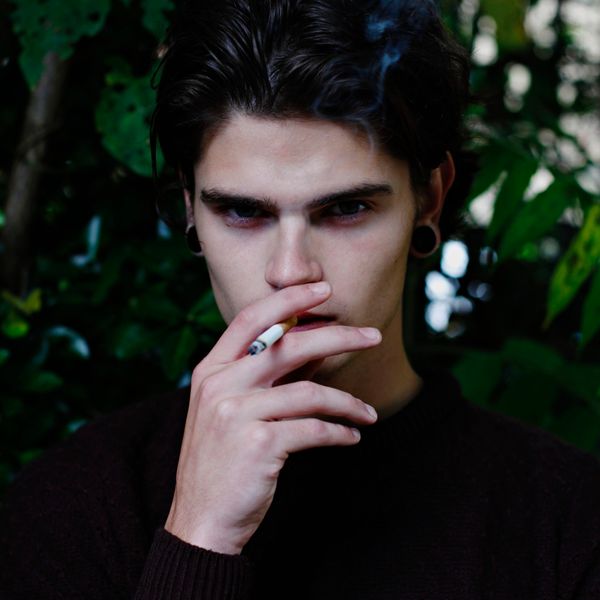 Christopher McCrory Is the Edward Cullen of Wattpad

Christopher McCrory may not be a household name just yet, but if you're one of the millions of people worldwide who are involved in the fan fiction community, you'll undoubtedly recognize his face.

After all, with steely baby blues, a pair of cheekbones that could cut glass, and the kind of smoldering stare that could give Edward Cullen a run for his money, it's not hard to see why McCrory's is the face that's launched a thousand "bad boy" Wattpad stories. And with nearly 53,000 Instagram posts under a hashtag of his name, stories about him with over 6 millions reads, and multiple book series about him, it's also something that won't be stopping anytime soon.

That said, what's been happening to the London-based creative for the past decade can arguably be considered one of the strangest examples of internet celebrity. From his rise as a popular internet avatar to becoming prime catfish fodder, McCrory has gotten used to seeing his own face staring back at himself from the cover of amateur book covers, Twitter profile pictures, and Chilean barber shops. And though it's a novel experience that most would envy, it's also one that's at times been disturbing, bizarre, and incredibly taxing.

But how did this all begin anyway? Believe it or not, all it took was a single photo. According to McCrory, it all started with his Tumblr art account and an off-hand decision to post a cute picture of himself with a close friend.

"It spread like wildfire," McCrory says, a hint of disbelief still managing to color his voice. "There were only a few photos of me online... but they just went crazy."

Seemingly overnight, "all these fake accounts started happening" — an occurrence that, understandably, terrified a young McCrory.

"I was just so involved in trying to avoid that kind of thing," he says. "I ran away from it for a bit and went off of social media." However, instead of tempering people's interest, his absence just meant that they began to create their own content about him, which eventually evolved into people writing stories that turned into full-fledged novels fantasizing about his life.

"There's one that even said I died and came back as a corpse called Corpse Boy," McCrory laughs. "It's crazy."

And while he's back online and has grown used to real-world fan encounters and hundreds of DMs linking him to stories about himself, it's still an unquestionably surreal experience — especially as McCrory would prefer to be considered as far more than just a pretty face.

A self-described "workaholic," McCrory currently runs Culted — a video-driven fashion and culture publication — in addition to working as a creative director for the likes of Selfridges and Loewe Digital Creative. Needless to say, it's a near-constant grind for McCrory, who always seems to be on the move — whether it be working on a virtual reality game or shooting stills for Madonna. But it also feeds into his primary misgiving about the entire thing, as he feels sometimes as if his talent is overshadowed by his internet infamy.

"I don't want to be a face on the internet," McCrory explains. "I don't want [my face] on Google, I want my work there." He continues, "But now, some of these books are going into print. It's not stopped, it's grown."

But there's another dark side to the entire phenomenon. According to McCrory, in addition to the widespread use of his image causing some legal issues, he's also had to deal with fans who were catfished with his photos.

"I'd be speaking to all these girls who are like, 'People are using your face and sending nudes,'" he says. "But, it's like, 'I'm gay, it's not me.' But girls will get really upset. Like, literally sending me paragraph upon paragraph." He pauses for a moment before quietly adding, "It just got kind of dark."

Despite this, McCrory has become decidedly less apprehensive about the internet's strange obsession with him. And it's mostly thanks to these "adorable" fans, who are primarily teenage girls from around the world.

"They are so genuine and send me so many nice messages," he explains. "Even though I'm gay, and they know that, they're still so [sweet]." And when I ask him if he feeds them content now — mostly so that people don't continue writing stories about his untimely death — McCrory laughs.

"I will post some stuff [for them]," he says before joking, "Gotta keep them going."

So how's he handling everything now? Well, on occasion, he'll FaceTime a writer for a chat and is even considering a meet-up with some of the people who have written and printed books about him. McCrory says he's also planning to launch a YouTube channel featuring improvised videos of himself live-reading the books.

"It's mad, but I just want to share the love and give back to the people who have been writing these stories," McCrory says, adding that he'd even be open to working with Wattpad in the future. "Hit me up!"