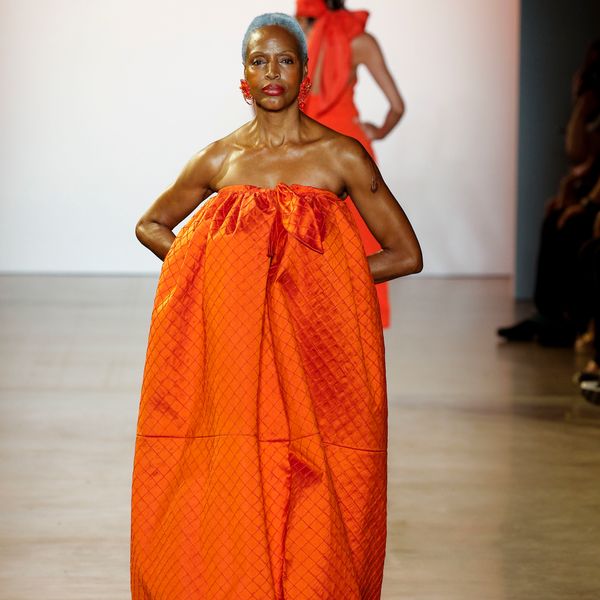 And 2019 CFDA/Vogue Fashion Fund finalists Christopher John Rogers held a glamorous, crowd-pleasing show. In fact the crowd was so pleased that he got a massive standing ovation. Diane von Furstenberg was seated front row, and the woman was really getting her life, clapping and smiling widely at nearly every single look. She wasn't alone.

Rogers, who was raised in Baton Rouge and now lives in Brooklyn, is only in his mid-twenties, but he makes frothy, glamorous confections of the type you don't often see from young designers. Models — diverse in race, gender presentation, age, and size — glided down the runway, some with their necks wrapped elegantly in tulle. Rogers showed a good deal of the grand eveningwear he's for which he's primarily known: cinched silk balloon tops, a slinky rose print gown with contrasting gloves, billowing Elizabethan collars.

My personal favorite look was an '80s-style wide-shouldered slouchy power suit, the blouse worn unbuttoned with a floral neck adornment. But he also showed more saleable garments: silk button-downs embellished with Swarovksi crystals, and pieces made from workwear fabrics.

The clothes were beautiful. But the other highlight of the show was how the models were encouraged to move. They twirled and posed dramatically, the way models were encouraged to walk throughout most of the latter half of the 20th century. They stopped mid-runway, lifting their arms and moving their hips to the audience's delight. Nearly every model had some sort of signature, something that made them stand out. The show was emotional — Rogers's friends and family were in tears after. We all ate it up.