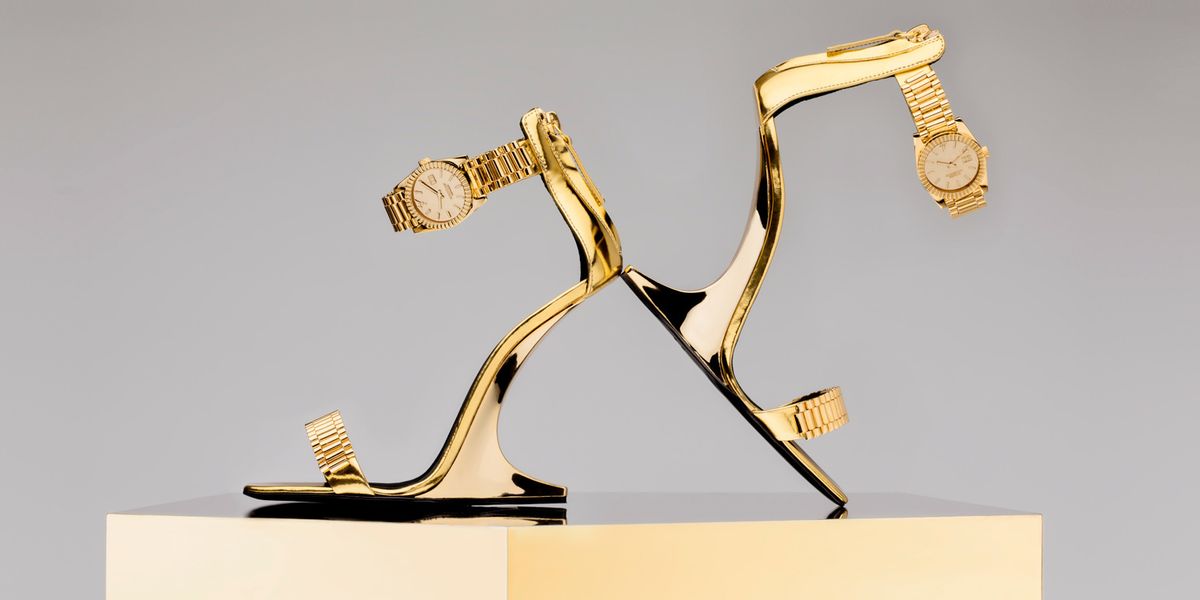 Christian Cowan's spring 2019 runway show at NYFW was filled with Internet-breaking looks. There was a top and skirt set constructed from a gigantic woven sun hat; a cropped polo shirt made using sheer embellished checkerboard material; and a black hoodie with matching briefs that boasted a monstrous football player shoulder silhouette, among others.

But, in a collection rife with head-turning looks like those, it was an elegant pair of heels that really caught our eye because, while they seemed like classic two-strap sandals at first glance, they were anything but. That is, of course, because they were modeled after a Rolex watch, with straps like those around the wristband and an actual watch face at either ankle.

The shoes were a collaboration with Giuseppe Zanotti, and featured an illusion heel that extended out from the ball of the foot, suspending the back of the shoe in mid-air. Created in gold and black, the shoe was teased on Cowan's Instagram just before the show with the caption, "It's almost time."

Taking advantage of the see now-buy now model, Giuseppe Zanotti is already selling Cownan's watch heels online for $1,995. Both are available on www.giuseppezanotti.com — how timely!

PAPER cover girl Kim Petras, who sat front row at Cowan's show and performed at his after party, has already worn the heels fresh off the runway.

But Cardi B was the first celebrity to reveal Cowan's collab, sharing this video on Instagram.