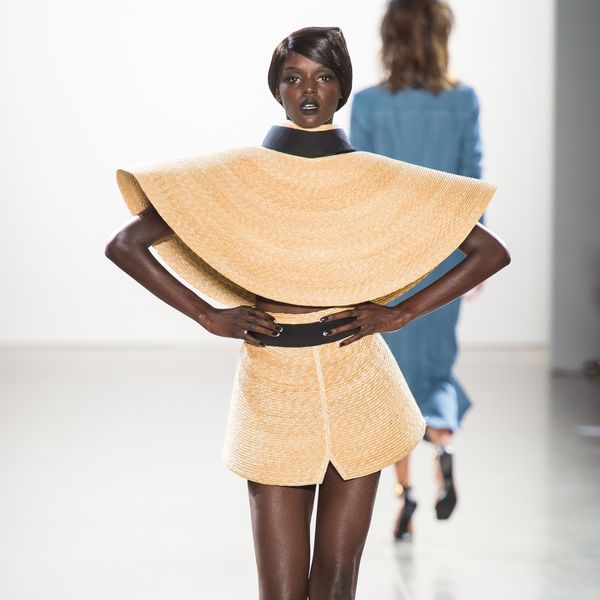 You Have to See Christian Cowan's Showstopping Double Sun Hat

Christian Cowan's spring 2019 show was full of standout looks. But there was one outfit that was particularly iconic, worn by burgeoning supermodel Duckie Thot. It was an ensemble that we need to get our hands on immediately, if not sooner: this double sun hat playsuit, made in collaboration with legendary milliner Eugenia Kim. I mean, look at it!

We love Cowan's take, which seems to comment on this summer's unexpected sun hat controversy.

To wit: when Simon Porte Jacquemus included an outrageously oversized version in his spring 2018 collection, La Bomba, he kicked off a massive trend. And then in July, when Bella Hadid was shot for Vogue Mexico wearing nearly nothing but a giant straw hat, the designer Instagrammed the image (three times, as he likes to do), implying that it was his. The problem? The hat was actually made by Mexican brand Olmos & Flores.

Fashion detectives Diet Prada were quick to call out the post, writing that "when you're the industry's current darling, you can try... but you can't always have it all lol." Jacquemus took down his 'grams, calling Diet Prada "fake news."

Who owns sun hats? We don't know. But Cowan and Kim definitely own the sun hat outfit.