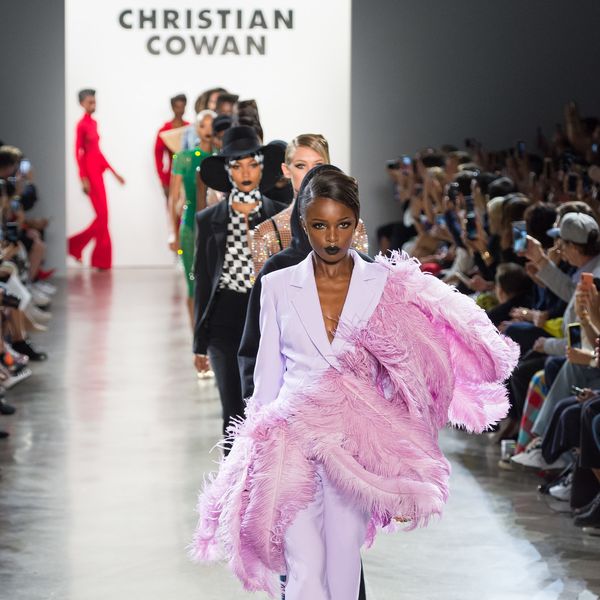 Christian Cowan Knocks Us Over With a Feather

A FROW To Die For

While much of Cowan's color palette consisted of black and strong primary and neon colors, he finished out the show with slip dresses and suits in delicate lilac, and a t-shirt dress with a hat by Eugenia Kim. The final look, a lavender suit with an asymmetrical trim of enormous purple feathers, was a stunner.

Like in previous collections, Cowan utilized the bow as a motif. There was an enormous one hanging off of a slip, and he affixed lilac versions to the exaggerated puff sleeves of a black and white body suit, both made in collaboration with Kim.

Cowan showed a denim suit with a cropped jacket, rendered half in light blue, half with a print of repeating gold watches. The model wore a plastic belt with a little bag attached for a gold watch, and her shoes (this season, Cowan collaborated on footwear with Giuseppe Zanotti), featured gold watches as straps.

Cowan utilized his trademark checkerboard pattern, which Cardi B wore on the cover of her hit album Invasion of Privacy, on several pieces. The designer played with the style, showing sheer sequined versions.