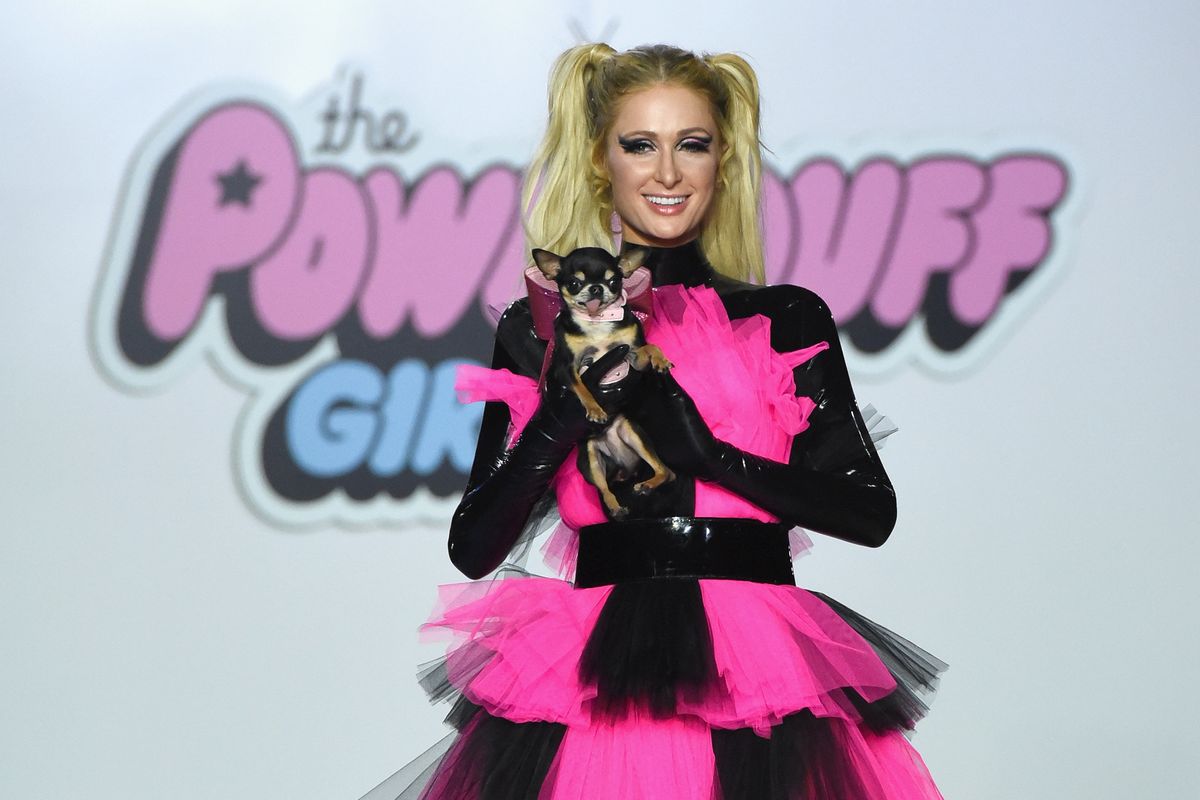 Backstage at Christian Cowan's Los Angeles fashion show created in collaboration with the Powerpuff Girls last night, Paris Hilton was being transformed into a cartoon character replica of one of the most loveable characters: Bubbles. With her high pigtails created by hair stylist Laurent Philippon and graphic black and white glitter liner by John Stapleton for MAC, her dog Diamond Baby was dressed with big pink sparkly bow. Super stylist Patti Wilson was rushing around last minute to attach light-up panels to the clothing, too. All of this was the quiet culmination of what was quite possibly the biggest and most high-end Cartoon Network fashion collaboration of all time.

"I first reached out to the Powerpuff Girls when I first came to America," explained Cowan backstage before the show. "I hadn't done a show yet and they were like, 'Let's wait. Then they reached about out and they were like yeah, 'What do you want to do?" Cowan, who grew up in the dreamy town of Cambridge just outside of London has been a fan since his childhood. 'I love them. I watched them my whole childhood!" he exclaimed. When asked which of the Powerpuff Girls he most identified with, he responded: "It depends on which day. I'm Buttercup when I'm hungry. I'm Blossom today."

Cowan may have just shown his fall 2019 at NYFW last month, but this collection presented an entirely new range of clothing and accessories. Models walked down the Powerpuff Girl rainbow-hued runway to tunes by strong female lead singers while a selection of gowns with handiwork that verged on demi-couture was presented. There was one extremely structural black dress with an uplifted tutu constructed of feathers that resembled a couture silhouette of the early 1950s: Cowan's personal favorite of the collection.

"What I love about Powerpuff Girls is that they're not damsels in distress."

The show opened with a trio of models walking down the runway wearing high impact glitter suits in shades that corresponded with the colors of the original Powerpuff Girls: blue for Bubbles, pink for Blossom and green for Buttercup. Glittering mini dresses with supersized bows, clear raincoats with matching oversized hats, dresses with hundreds of Preciosa crystals (no Kira Kira needed!), lilac and neon green feathers and pleated tulle dresses and trains (a continuation of what we saw at Cowan's fall 2019 show in New York) were all there and more.

"It's inspired by Powerpuff Girls but in many different ways. We have some literal translations of the girls that you'll see and we have some about new characters they're introducing, but also the vibe," explained Cowan. "I watched many cartoons growing up." The casting in the collection was diverse too, and featured one older woman as well as Khrystyana Kazakova, who wore a glittering sequin hoodie dress, from Season 24 of America's Next Top Model.

Naturally, the L.A. celeb set came out for the event too. Heidi Klum sat front row next to Erika Jayne and a mini statue of Blossom, both dressed by Cowan. Tinashe, Amanda Steele, Carly Rae Jepsen, Betty Who and Kim Petras were also there. It's no surprise given Cowan has dressed more celebrities than we can count: from Beyoncé to Cardi B.

Pegged to International Women's Day, Cowan chose to shine a light on the subject of women's empowerment by partnering with a charity. The collaboration benefits She's the First (STF), a nonprofit organization that fights gender inequality through education. He also took a moment to celebrate the empowering message behind one of the most beloved female centric cartoon characters of all time.

"What I love about Powerpuff Girls is that they're not damsels in distress," he said, moments before the show. "They don't need saving, they save a lot of people. They're not all cute. Buttercup is tough. And the show is really inspired by that."