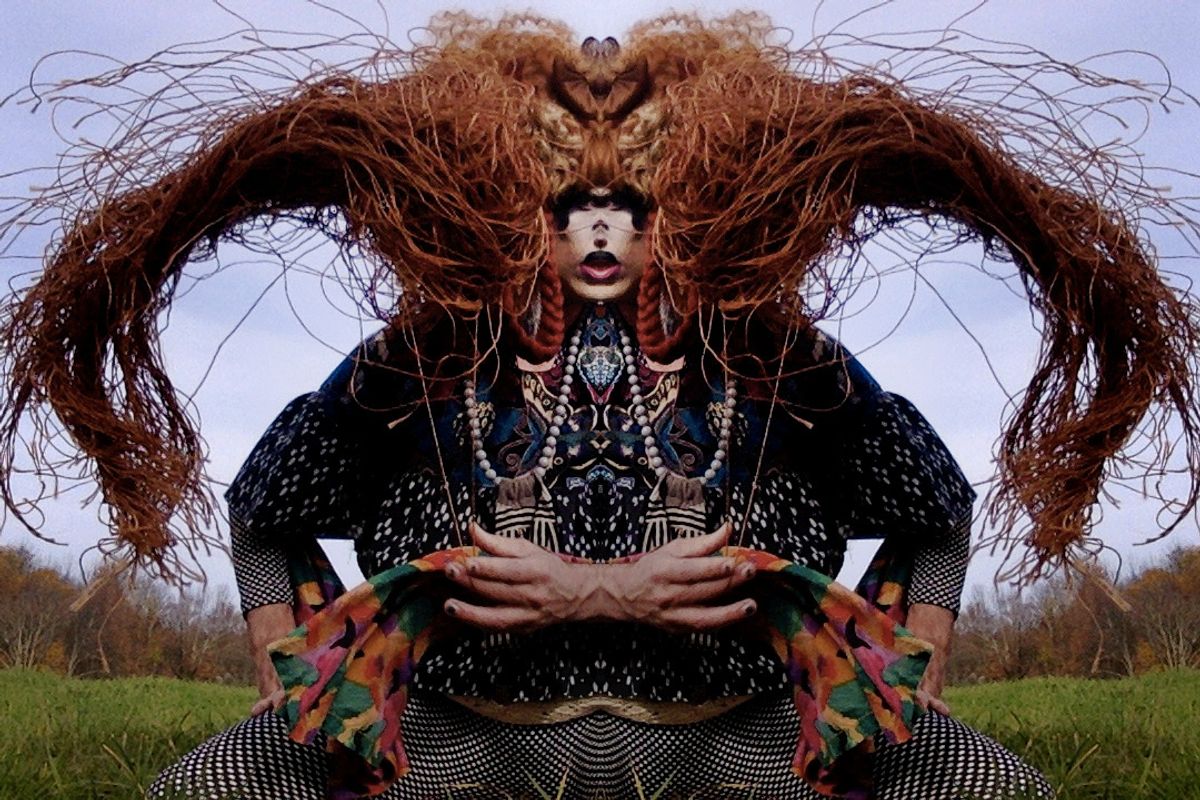 Chris of Hur is a Brooklyn drag performer who isn't so much ushering the art form into the future, but deliberately bringing it back. Through song choices and outdated technology, cultural nooks from eras past that aren't part of today's LGBTQIA lexicon are christened with contemporary queerness. Even beloved Baby Boomer icon Paul Simon isn't out of reach when Chris of Hur is onstage — or positioned before the low-quality lens of a 2012 MacBook.

On KOLYUU BEDEE, Hur – née Chris Harris – sings a reworked version of "You Can Call Me Al," Simon's mid-'80s oddball pop hit with seemingly nonsensical lyrics. It's really a tale of mid-life crisis, for the most part, but it's hard to decipher the verses, which are somewhat stream-of-consciousness style, between the randomness of a chorus about Betty the bodyguard and Al, the long lost pal.

Harris made the clip using Apple's Photo Booth mirror mode, then edited; throughout, it truly is visually bewildering. And the look isn't standard drag, but very much Chris of Hur: Piled-high hair, coiffed and curled with a shiny black cylindrical hat on top, multiple layers of rich-looking textiles and necklaces, and on Hur's face, abstract shapes placed symmetrically, in the vein of the camera effect.

That work in particular is part of the BUUTHz series, which includes both videos and stills, all originating from Harris' laptop in mirror mode. A photography grad from the Fashion Institute of Technology, Harris always gravitated toward "technology that was on its way out," like older cameras and film. When the Chris of Hur persona emerged, mirror mode came into play as an easily accessible medium. Hur appreciates the grainy quality as much as its mobility, often using "dramatic positions," like hanging the laptop upside down from a tree, for unexpected angles in photos — and the mirroring too, of course.

"I find what's useful about it is how it's instantaneously interactive and disorienting to your body. But at the same time, there's this sense of comfort through an unrelenting symmetry, so that you feel more comfortable trying things, because it's automatically beautiful," Harris says. "It sort of destroys, disorients your body and sense of self, but at the same time you feel comfortable doing that because symmetry is just a like this stamp of beauty. Because it will always have that, you don't worry about making something ugly, or being ugly."

The results are striking — gorgeous and a bit baroque, like Hur's style, but a little unsettling in their warped complexity, too. Looks are completely handmade by Harris, who learned to sew from his mother and grandmother from age five onward. The wigs, often with coiled braids and frou-frou fluffiness, are all his own work, too. (Drag Race winner Sasha Velour, who Harris has known and worked with for years, recently ordered this custom hairpiece inspired in part by a previous Hur look).

In lip syncs, both onstage and in videos, Hur is similarly noncompliant with viewer expectations; "You Can Call Me Al" is actually one of the more familiar songs used. In the realm of drag especially, Hur's choices are all surprises: 2 Live Crew's pro-boning crowd sing-along "If You Believe in Having Sex," the grumbling Tom Waits ballad "Anywhere I Lay My Head," and the another slow-burner, this one with a trio of Hurs singing together, in roots-rock musician Bonnie Raitt's "Angel from Montgomery."

"I really try to find good music," Harris says. "One of the things that's disappointed me the most, not so much in the drag community as in the gay community, is just how bad the taste in music is... There are certain things that I really want, that I want to do, and certain things I just don't care about. But I do really want to instill better music into gay and drag culture."

One sweeping example of this effort is the clip for BABY STUUF, featuring Tyler Ashley, built around a multiple song, genre-spanning mash-up that begins with cult-beloved theatrical bluesman Screamin' Jay Hawkins, goes into '90s-era D.C. post-punk supergroup The Make-Up, then a short-lived band from the '70s you've never heard of called Hot Poop, and ends with an electro-laced hip-hop cut from Spank Rock.

In avoiding familiar songs, Harris says, they "build something from a piece of material, sort of cultural artifact, that people don't already have a relationship to."

Hur does gospel too, like The Clark Sisters song where a visual of clapping hands serve as backup singers. "Because gospel feels just as performative and punk as punk music," Hur says. They've only ever performed it live, but are considering a standalone video at some point.

Even "You Can Call Me Al" had its element of obscurity — to avoid copyright infractions on YouTube, Hur teamed with Ed Shepp, an experimental electronic artist who had a radio show on WMFU in the 2000s, for a cover version. Harris had been using tracks in shows and asked for help in matching the metering of Hur's lip sync to the track: "Just casually speaking the lyrics, and then he Auto-Tuned the fuck out of it, so it's kind of like I'm singing," he says.

This month is actually Harris' dragaversary: April marks five years of Chris of Hur. In that stretch are countless innovative shows, creative residencies (like a three-night evening-length drag opera with Sasha Velour, Patti Spliff, and Elle McQueen), and multiple monthlies — the latest being PURSUNz, held at Bizarre Bushwick and promoted with collaged mirror-mode images (a series all their own).

Over the years, Chris of Hur has eclipsed photography to become Harris' primary artistic output. But visual work is still a centerpiece, and he hopes to transition into a studio-based practice with freedom to explore that further.

Photography has become Harris' primary artistic output. But visual work is still a centerpiece, and he hopes to transition into a studio-based practice with freedom to explore that further.