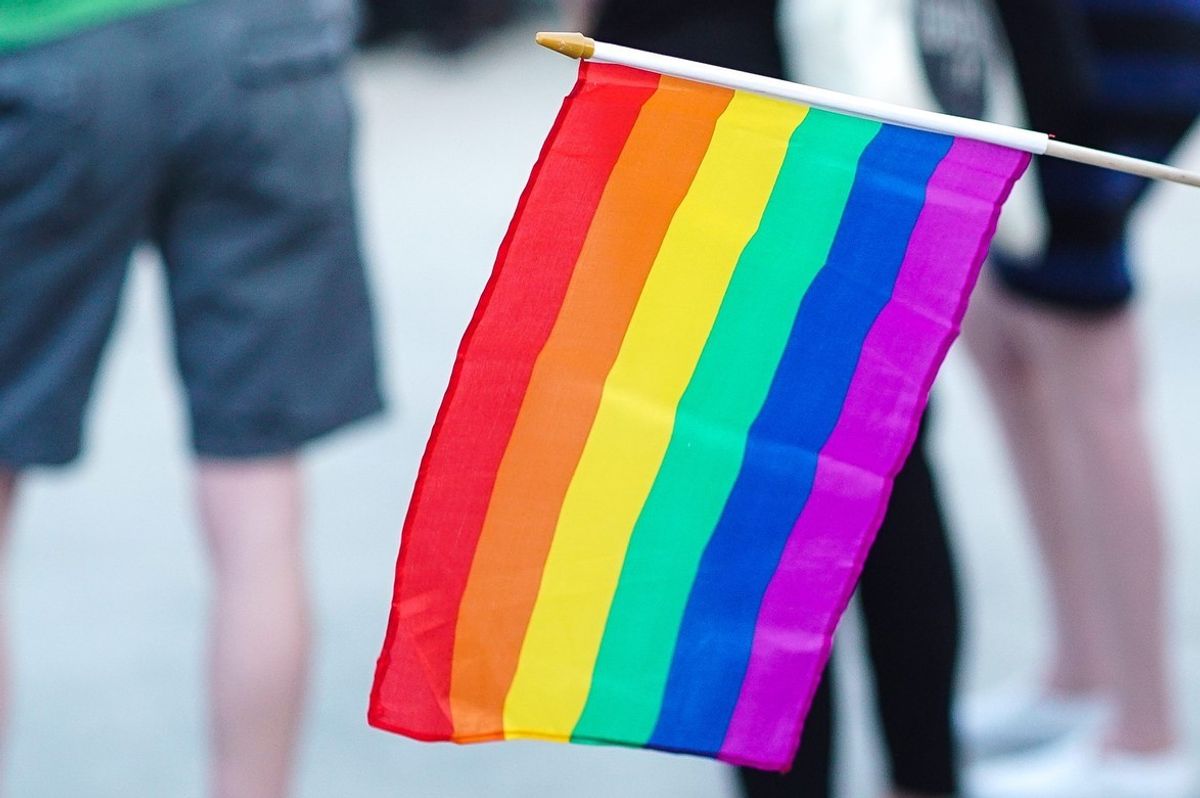 Choosing Boldness: Why This Year's Pride Isn't A Time to Be Scared

After last week's horrific shooting at Orlando's Pulse nightclub, where 49 people were killed, Ahead of NYC's Pride celebrations this weekend, we asked a range of people from New York's LGBTQ community--from members of Qween Beat sharing their first queer club experiences, to Jordan Volness on her first Pride as an out transwoman, to Maya Monès on embracing identity. It's a celebration of the people, places, and parties that made and still make LGBTQ existence a little bit easier in an often-scary, narrow-minded world. Join us as we honor a community that's unique in its legacy, fortitude and resilience.

"It's almost a good pain," Stephanie, the Williamsburg tattoo artist I'd carefully researched and selected, said as she drew thick lines along my inner left wrist last October. In truth, I didn't want her to stop as she punctured my skin — filling the tall letters with dark ink, dragging them out tight and tender.

"All done," she announced as she lifted my arm toward me. Red lines of irritated skin and blood illuminated the thick words. "Always the hours" — it's a line spoken in The Hours, the first queer-themed film, based on a novel by Michael Cunningham, that I'd ever watched as a questioning teen. These words were an homage to Virginia Woolf's "moments of being," her theory that a life can be captured and understood in the instances of a single day. In the months before, I'd found myself repeating them, sketching across napkins and notebooks, sometimes on the most sensitive curves of my arms and legs. I'd press the ink down hard on my skin, like Stephanie had just done, wanting to feel the message seep in, letter by letter.

Woolf's words were an anchor to the moments that had brought me to now, to being an out gay woman in New York City. I'd had my aunt Mary — who always seemed to skillfully appreciate and recall even the smallest memories — write out the phrase close to 40 times in her sloping, enviable penmanship. As I looked at it imprinted against my faint, bumpy veins, I thought of the months before, of first being out after leaving my Midwestern town and moving to New York.

In college, I stepped lightly around my sexuality, rarely seeking out anything romantic. And the few times I did, I was careful to work around pronouns: "I'm going on a date with a really great person." I'd hide behind the guise of most people's assumptions that a long-haired girl in a dress equated to straightness. In instances where I was challenged to champion my identity, I chose to be passive. I was scared to do anything else.

Things changed when I moved to New York. As if in some queer-Nora Ephron fantasy come to life, I fell in love for the first time. And I learned, immediately, the thrilling vulnerability of living and loving out — to hold her hand as we navigated busy avenues, to kiss her "hello" in front of the onlooking passersby of my office lobby, and (my favorite) to say, "This is my girlfriend." But in time, I'd learn that even the most moving, genuine love can be fleeting — and when things end, identity shifts.

I had felt safe to share in my "outness" with someone else; I could do "out gay couple." But "out, gay, single woman"? Impossible territory. I didn't know what it meant to wear this identity without the woman I had loved. And I certainly didn't want to celebrate that. I turned down invitations to go out to gay spaces and avoided lesbian-themed films, shows, books. In what was perhaps my greatest queer-lady sin, season 3 of Orange is the New Black went untouched for longer than I care to admit. I withdrew from my own community.

Eight months after that day in the tattoo studio, my aunt Mary and I are driving along the outer roads near her home in the northwest corner of Washington State. Five days earlier, a man had walked into an Orlando gay bar and killed 49 people. It had been five days of harsh, sharp pain, the kind of hurt that draws out too long. "What does being a gay woman mean to you now?" my aunt asked, in her usual piercing way of posing simple questions whose answers are so layered and loaded.

During those first hours after the news broke, I went to Stonewall Inn and held candles and signs with other saddened New Yorkers. I'd received texts from my straight ally friends, asking how I was — jolting me to the reality that I was a member of something so much larger, something shaken and bruised. And in those days, I made a choice. I chose to forgo fear. I chose to live out.

I'd picked up the phone, called my Republican grandfather and come out to him after years of silence and fear. I'd sobbed on the other end of the line as I received his response: "I'll stand behind you in everything you do."

I went to Cubbyhole, my beloved West Village queer bar, ordered pizza with my friends and sat on our old barstools, heavy-hearted but firm in our safe space. I clicked "attending" to any New York Pride event I could, even if I knew I couldn't stay up that late or possibly party that long. I made a conscious decision to live as out as possible.

"It means being...bold," I said, pausing on that last word, and realizing this was the first time I had associated it with my sexuality. "It means little radical acts of boldness."

Early this week during Pride, I sat with two of my friends at one of the first parties, held at a small Brooklyn bar. "I'm so scared," said one of them as we laid out our plans for the week. It was scary. Someone had come into our community and reminded us that our safe spaces aren't as safe as we'd imagined and that even now, our identities are still threatened.

I looked around at the people at the bar — dancing, sloshing beer across the counter, talking around warm candlelight. We could be scared. But it didn't mean we wouldn't be out. We could step back into our safe spaces. We could decide to speak our truths on the phone to our conservative grandparents. We could hope that at some parade or party we'd run into our first partners and thank them for holding our hands in a time when walking this life alone was the scariest thing we'd faced.

Pride 2016 means no apologies for who we are. It means living our truths for those who no longer can. And despite feeling scared, this Pride means choosing to feel safe within the strength of our community.

Now, as I look at the lines adorning my left wrist, I am reminded of time in a different sense. Those little moments weren't about me and my individual "outness" but how I choose to live fully out, to live unapologetically every day. In my community, our moments of being, of choosing to be, are going to play out in our choices to show up. To choose to celebrate our truth — and live in all the hours we have. This week, this Pride, will be one of the first testaments to what we do with that time: To celebrate, to dance, to be visible. To be bold.

For more of PAPER's 2016 Pride check here, including stories from MikeQ and Cakes da Killa of Qween Beat, Jordan Volness, Maya Monès, and more, as well as a Pride party guide.